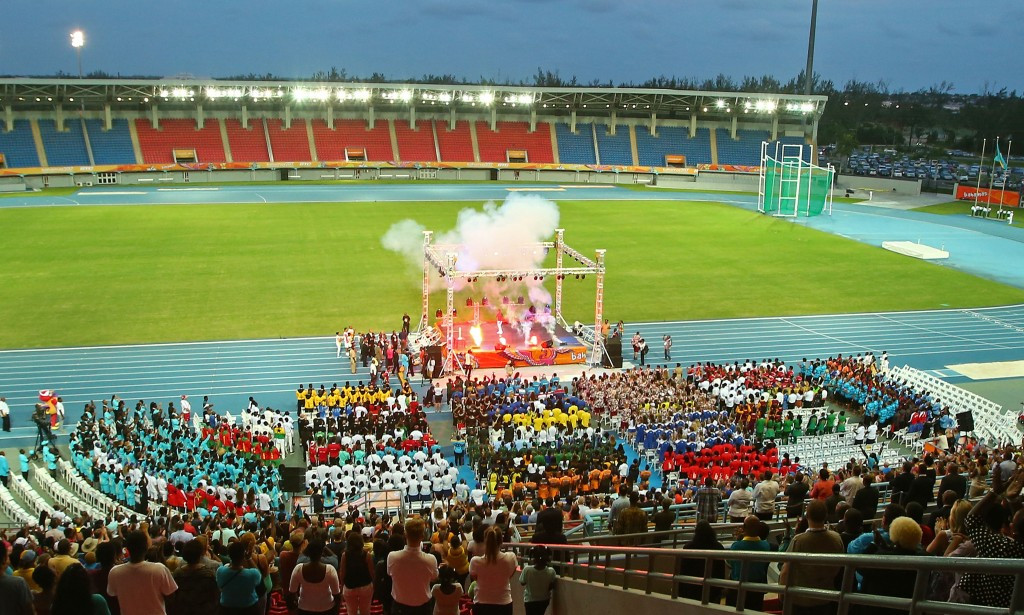 Athletes competing at the Commonwealth Youth Games were given a good luck message by Her Majesty The Queen before Bahamas Prime Minister Hubert Minnis declared the event open during a fun-filled Ceremony here tonight.

Following a speech from Commonwealth Games Federation (CGF) President Louise Martin, Governor-General of The Bahamas Dame Marguerite Pindling read out a short message of support on behalf of The Queen.

"I am pleased that the Commonwealth Youth Games will be held in The Bahamas," it said.

"I hope the Games are successful and are enjoyable for all of the athletes from across the Commonwealth who will come together to participate in this exciting event.

"I send my best wishes and good luck to you all."

Minnis, who took office as Prime Minister in May of this year, then officially opened the sixth edition of the Commonwealth Youth Games.

He paid tribute to former South African President Nelson Mandela, who died in December 2013 aged 95, on what would have been his 99th birthday.

Minnis also described staging the Commonwealth Youth Games as an "honour" and claimed the country’s citizens were "proud to have athletes and visitors in our nation".

Nassau hosted the Commonwealth Heads of Government Meeting in 1985, where the Nassau Accord was struck, calling on the South African Government to dismantle its policy of apartheid.

"I note that today is the birthday of the beloved President of South Africa, Nelson Mandela," Minnis said.

"The Bahamas Government was pleased to host the 1985 Commonwealth Heads of Government, which agreed to the Nassau Accord.

"The Nassau Accord led to the eventual release of Mr Mandela from prison after 27 years, and played a role in the eventual dismantling of the apartheid system.

"In this spirit, let us celebrate at these Games the ideals and values of the Commonwealth, including those of peace, freedom and common purpose for progress and a better and more just world."

The Ceremony began with the traditional parade of athletes, led out by Samoa, host to the last edition of the Commonwealth Youth Games in 2015.

The loudest cheer was, as expected, reserved for the host nation, who entered the iconic venue to rapturous applause.

Once all athletes who were taking part in the Opening Ceremony had arrived, the Gold Coast 2018 Queen’s Baton was carried into the arena by young Bahamian competitors Shaquiel Higgs and Katelyn Cabral.

Cyril, Scott, Erica and Tanya Robinson, the children of legendary Bahamian track and field athlete Thomas A.Robinson – who the stadium is named after – also held the Baton, which is due to stay in the Caribbean nation until Monday (July 24).

In what represents the first time it has been at a Commonwealth Youth Games, the Baton is scheduled to visit a number of local landmarks, sporting events in track cycling and beach volleyball, and young persons’ community projects before it departs for Bermuda.

Wellington Miller, President of the Bahamas Olympic Committee and head of the Organising Committee of the event, Martin and Minnis then took to the stage to speak.

"It gives me the greatest pleasure to add my welcome to the opening of the Bahamas 2017 Commonwealth Youth Games," Martin said.

"Over a thousand of the Commonwealth’s finest young athletes, right here before us, are all set for a joyful carnival of inspiring competition, personal development and international friendship.

"Continuing the legacy from the Youth Games in Samoa in 2015, The Bahamas now joins that list of nations that have taken the brave and inspiring step to unleash the unifying power of sport and young people.

"It has been a huge team effort – delivered in record time – and the stage is now set.

"So, athletes, make it count."

A carnival-style party, packed full of Caribbean flavour, then ensued, beginning with Wendi Lewis and Dyson Knight giving a rendition of I’m Next, the official song of the 2017 Commonwealth Youth Games.

By the time the last performer – local reggae, dance and electronic star Julien Believe – had taken the microphone, athletes had joined the artist on the stage before a troupe of junkanoo dancers, representing a popular street parade held every Boxing Day and New Year's Day, led the athletes out of the stadium amid a spectacular display of fireworks.