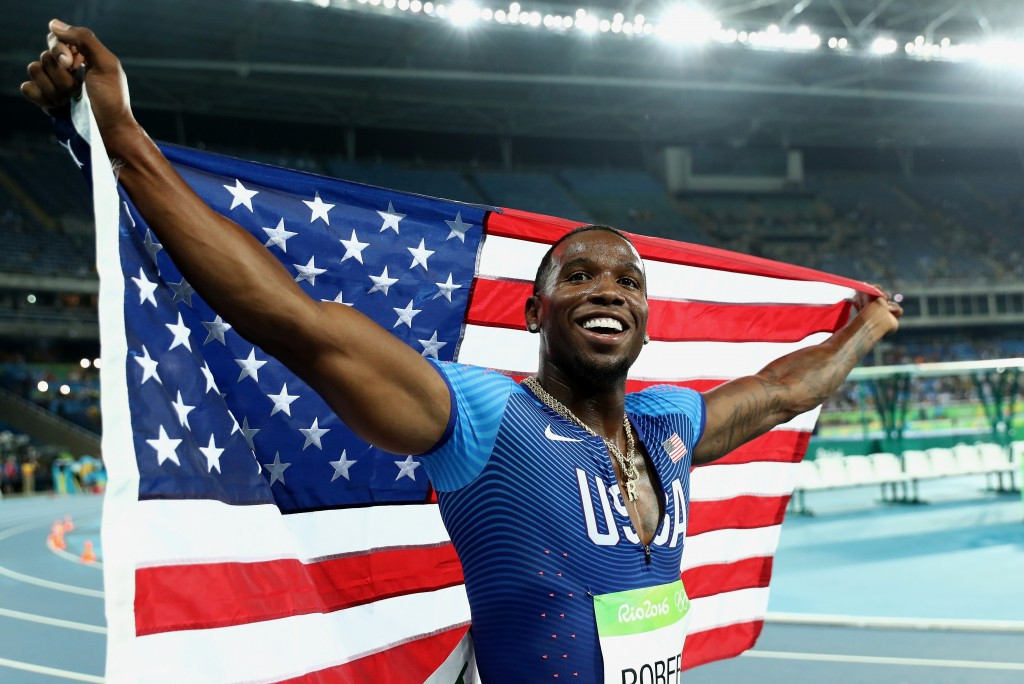 Olympic gold medallist Gil Roberts has been cleared of a doping violation after successfully arguing that he ingested a banned substance by kissing his girlfriend.

The 28-year-old athlete was a member of the United States men's 4x400 metres team which triumphed at the Rio 2016 Olympic Games.

He failed an out-of-competition test on March 24, testing positive for probenecid, a diuretic and masking agent.

He was cleared of the offence last month by the American Arbitration Association (AAA), however, with the United States Anti-Doping Agency now releasing the final verdict.

Roberts claimed his girlfriend Alex Salazar had been taking medication which she bought in India for a sinus infection, which contained probenecid.

The sprinter said he was unaware the substance could be passed to him while kissing his girlfriend.

The AAA panel were persuaded the medicine used by Salazar contained probenecid, which is not water soluble and binds to protein.

"Thus, everyday some of the probenecid poured into her mouth stayed in her oral cavity binding to her tongue, gums, cheeks, etc," the AAA stated.

"Starting after she arrived back in the United States on March 17, 2017, she started visiting Roberts, and whenever they were together they kissed frequently and passionately.

"This arbitrator is persuaded by Dr. Kintz' testimony that bits of the probenecid that remained in her mouth after she took her medicine could and did move to his mouth through their frequent passionate kissing."

The panel also deemed that the amount of probenecid in Roberts' sample was too small to have had a masking effect.

Roberts was cleared with the athlete deemed to be "without fault".

In a similar case, world pole vault champion Shawn Barber was cleared last year of a positive test for cocaine.

This was said to have been inadvertently caused through an encounter with a woman he met on personals site Craigslist.

Barber was selected for doping control after competing at the Canadian Championships and testers found the presence of cocaine metabolite benzoylecgonine.

He successfully argued the substance was ingested inadvertently.

French tennis player Richard Gasquet also successfully argued that a positive test for cocaine had been due to kissing in 2009, which saw him cleared.

The full verdict in the Roberts case can be read here.

"The Athletics Integrity Unit is aware of the decision delivered by the USADA in the case of Gil Roberts," an AIU statement read.

"As with all anti-doping cases to which the AIU is an interested party, the unit will review the decision and subsequently decide whether or not to lodge its independent right of appeal to the Court of Arbitration for Sport (CAS).

"In order to maintain the integrity of the case, the AIU will make no further comment at this time."

insidethegames have contacted the International Association of Athletics Federations for comment.