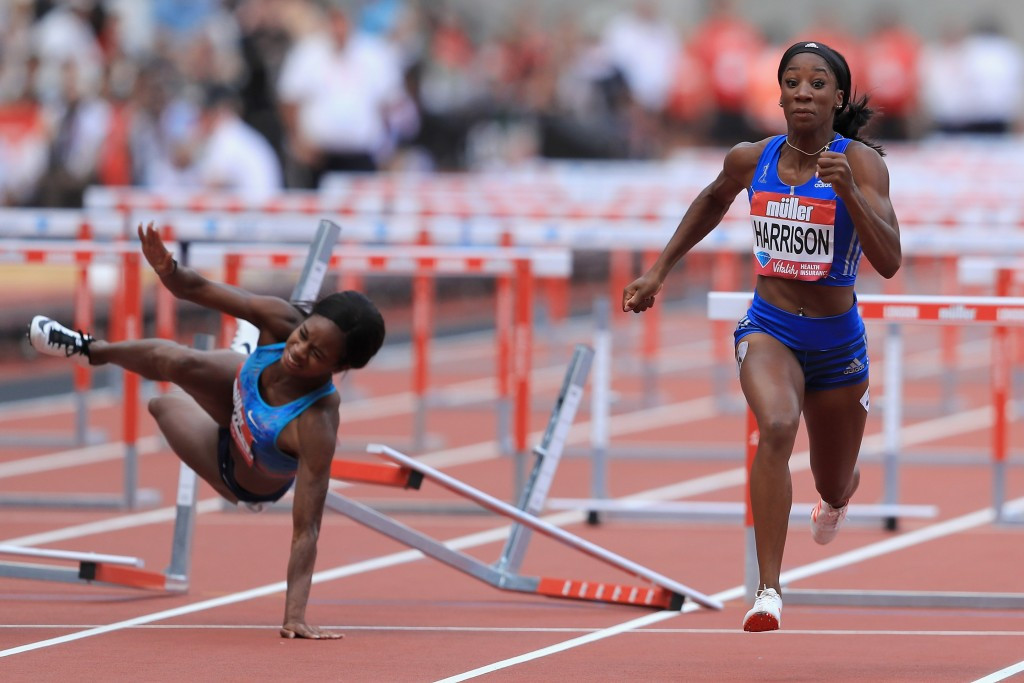 Kendra Harrison made a winning return to the London track on which she broke the 28-year-old world 100 metres hurdles record last year, clocking up a 21st consecutive victory in 12.39sec at the ninth International Association of Athletics Federations (IAAF) Diamond League meeting of the season.

Harrison is giving every sign that, having missed qualification for the Rio Olympics and also suffering a hand injury earlier this year, she is determined to earn the global gold her talent merits at the IAAF World Championships that will take place in the same Olympic Stadium next month.

But if her win was expected, the presence on her shoulder of another athlete with fond memories of the arena, London 2012 champion Sally Pearson, was a surprise, given the Australian's long struggle for fitness after a shattered wrist and a serious hamstring injury.

Pearson won her heat in 12.71, a season’s best, but then stepped up again in the final to push the American trials winner to the line in 12.48.

"I am so happy right now," said Pearson.

"I'm really excited to have been able to prove what shape I am in."

Kristi Kastlin failed to finish after misjudging the first hurdle, and fellow American Jasmin Stowers, well placed, came to grief in spectacular fashion over the final set of barriers.

Britain's world and Olympic 5,000 and 10,000m champion Mo Farah rounded off the Muller Anniversary Games meeting with victory in the 3,000m in a season’'s best of 7min 35.15sec, in front of Adel Mechaal of Spain, who ran 7:36.32, and fellow Brit Andrew Butchart, one of 11 runners to be towed to a personal best by Farah's pace.

European indoor 1,500 and 3,000m champion Laura Muir fell a little short of her target of breaking the longstanding British mile record of 4:17.57, held by Zola Budd, as she was passed on the final lap by Kenya’s Olympic 5,000m silver medallist Hellen Obiri.

She won in a meeting and national record of 4:16.56, surpassing the mark set by Olympic champion Faith Kipyegon.

However, Scotland's Muir pushed hard down the final straight to earn a personal best of 4:18.03.

Allyson Felix of the US, beaten to last year's Olympic 400m gold by the diving finish of The Bahamas' Shaunae Miller, is determined to add another global gold to her collection this year, judging by her performance in winning in 49.65, the fastest time in the world this year.

The 31-year-old, who will defend her title in London, finished metres clear of compatriots Courtney Okolo - second in a season’s best of 50.29 - and Shamier Little, third in a personal best of 50.40.

"This is my first Diamond League meeting of the season, so it is good to get underway with a win," said Felix.

"I am looking forward to get some more training in before the World Champs - it was great to get a run-out on the track before the Champs."

Jamaica's Olympic 100 and 200m champion Elaine Thompson, who is concentrating on the shorter distance this season, won in 10.94 in a race which saw three women break 11 seconds.

Dafne Schippers, the world 200m champion from The Netherlands, ran 10.96 as the fastest qualifier in the heats, but was a hundredth of a second slower in the final, with Blessing Okagbare-Ighoteguonor of Nigeria third in a season's best of 10.99.

Yet another 2.00m jump from Russia's world high jump champion Mariya Lasitskene earned her victory in the stadium where she will be a clear favourite for world gold next month under a neutral flag.

Russia remain suspended by the IAAF due to doping allegations, with Vashti Cunningham of the US second today on 1.97.

Fred Kerley, the startling new 400m talent from the US with a 43.70 time this season, finished second in the 200m in what was his first race as a professional.

The 22-year-old from Texas A&M clocked a personal best of 20.24 behind the man who won the American Trials over this distance, Ameer Webb, who clocked 20.13.

Three days earlier in Lausanne, Kolak responded to the 36-year-old Spotakova's meeting record of 67.40m with a winning final effort of 68.43m that topped this year's world list and added more than 2.00m to her national record.

Here that result was reversed, as Kolak set a meeting record of 67.83 in the third round, only for the Czech athlete to win with a last round effort of 68.26.

There was another field event meeting record in the women's long jump, where Olympic champion Tianna Bartoletta put it all together in the fifth round to reach 7.01m and earn victory ahead of Serbia’s Ivana Spanovic.

The latter's opening effort of 6.88 was a season's best, but it was also a costly effort as she was clearly in immediate discomfort with what looked like an ankle injury, forcing her to pull out of the competition at that point.

This is a concern for the Olympic bronze medallist and European indoor champion with the World Championships less than four weeks away.

Britain's Katarina Johnson-Thompson raised some home hopes with fourth place in a season's best of 6.75 behind Australia's Brooke Stratton, whose 6.79 was also a season’s best.

In the arena where he won an unexpected 800m silver at the London 2012 Games, Nijel Amos of Botswana confirmed his recent return to top form after injury by winning in 1:43.18, the fastest time of the year.

Aries Merritt, the world record holder in the 110m hurdles, earned victory in a season’s best of 13.09 in front of Milan Trajkovic, second in a Cypriot record of 13.25.

Greece's Olympic pole vault champion Katerina Stefanidi won with a best of 4.81m, clear of Switzerland's Nicole Buchler, second in a season’s best of 4.73, and Sweden’s Michaela Meijer, who managed 4.65.

They finished above Sandi Morris of the US, who last year became only the second woman to jump 6.00, on count-back.