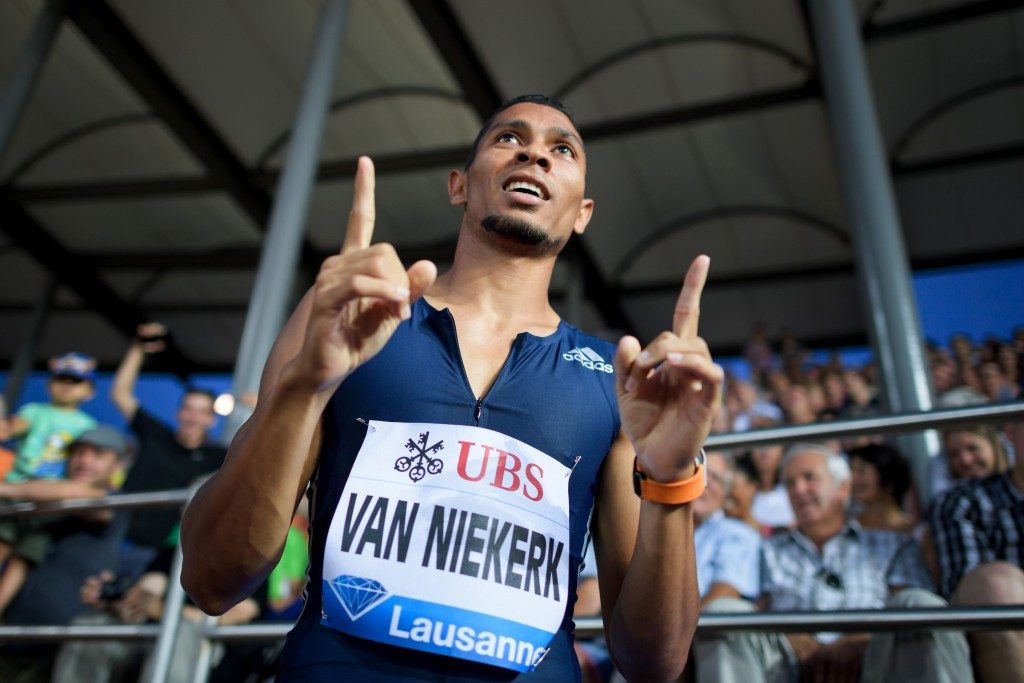 Man-of-the-moment Wayde Van Niekerk duly won his first major 400 metres since setting a world record of in last year’s Olympic final as he came home in 43.62sec at the International Association of Athletics Federations’ (IAAF) eighth Diamond League meeting of the season at the Stade olympique de la Pontaise in Lausanne.

The South African’s time, coming eight days after his 300m world best of 30.81 in Ostrava, was the fastest run in the world this year, a Diamond League record an Athletissima meeting record.

Van Niekerk’s performance was arguably the highlight of a dramatic night of action in which Russia’s world high jump champion Mariya Lasistskene, competing under a neutral banner, moved to equal-fifth on the world all-time list as she improved her personal best from 2.04 to 2.06 metres - a meeting and a Diamond League record.

Other eye-catching performances came from Ethiopia’s 17-year-old Selemon Barega, with a prodigious 5,000m run,  and Cuba’s Pedro Pablo Pichardo, who re-stated his ambition of making sure Olympic and world triple jump champion Christian Taylor does not have things all his own way this season.

Meanwhile, in the men’s pole vault, Sam Kendricks and Renaud Lavillenie played it again, and once again the American, who achieved his first 6.00m clearance in winning last month’s US Championships, finished on top with a meeting record of 5.93m that was equalled by Poland’s 2011 world champion Pawel Wojciechowski, a national record that earned him second place on countback.

Lavillennie, whose early season was disrupted by injury, managed a season’s best of 5.87m but could go no further, finishing third.

Barega produced an extraordinary run in the men’s 5,000m that was only fractions away from earning him a first Diamond League victory as he clocked 12min 55.58sec behind his 23-year-old compatriot Muktar Edris, whose winning time of 12:55.23 was the fastest run so far this year and almost four seconds inside the meeting record.

For Barega, last year’s World Under-18 champion over 5,000m, it was an astonishing step forward from the personal best of 13:15.32 he set in Montreuil last month.

Pichardo and Taylor scaled the heights - or rather lengths - in the triple jump two years ago, battling in 18m-plus territory before the American took the world title in Beijing two years ago in 18.21m, just eight centimetres shy of Jonathan Edwards’s 1995 world record of 18.29.

Here, Pichardo led with a second round effort of 17.54m before sealing victory with a season’s best of 17.60m in the final round as Taylor had to settle for second in 17.49m, ahead of the American who took silver behind his two Olympic golds, Will Claye, who managed 17.12m.

Barbora Špotáková, the Czech Republic’s 36-year-old Olympic champion in 2008 and 2012, equalled the meeting record with her first effort in the women’s javelin, 67.40m

The 2016 champion, 22-year-old Sara Kolak,, responded with a winning final effort of 68.43m - a Croatian record, more than two metres further than the one of 66.18m she set to take the gold medal in Rio de Janeiro,  a meeting record and the furthest thrown so far this season.

Olympic shot put champion Ryan Crouser is on something of a roll this season - this was his seventh competition of the season, and he has gone over 22m in all but one.

Six shot putters reached beyond 20.80m - the first time that’s happened outside a World Championships or Olympics - and the closest challenger was New Zealand’s World Indoor champion Tom Walsh with a season’s best of 21.97m.

In a stacked women’s long jump field, US Olympic champion Tianna Bartoletta had to settle for third place with a best of 6.65m as Serbia’s Olympic bronze medallist Ivana  Španović  won with 6.79m, Bartoletta’s compatriot Shakeela Saunders taking second place with her last effort of 6.68m.

Bartoletta’s fellow American and Olympic champion Matthew Centrowitz could only manage seventh place in the men’s 1500m in 3:34.83 in a race won by Ethiopia’s Aman Wote in 3:32.20.

In a non-Diamond League event, Genzebe Dibaba of Ethiopia’s crack at the world mile record of 4:12.56 held since 1996 by Russia’s Svetlana Masterkova fell short – her time of 4:16.05 was slower than her 4:14.30 of last year, the second fastest ever run.

Sifan Hassan of The Netherlands, who tops this year’s 1500m rankings with 3:56.71 and won a classic race against Kenya’s Olympic champion Faith Kipyegon in Paris last Saturday (July 1), chose to test her speed in the 800m, as did Britain’s European Indoor 1500 and 3,000m champion Laura Muir.

Both were rewarded with personal bests - Hassan was fifth in 1:58.13 and Muir sixth in 1:58.69 in a race won by Burundi’s Olympic silver medallist Francine Niyonsaba in 1:56.82.

World 200m champion Dafne Schippers of The Netherlands won in a season’s best of 22.10sec ahead of Ivory Coast's Marie-Josee Ta Lou, who clocked a national record of 22.16.

Justin Gatlin, 100m winner at last month’s US Championships in 9.95, underlined the form he is in heading towards a final showdown with Usain Bolt at next month’s IAAF World Championships in London as he won in 9.96 ahead of the Ivory Coast's Ben Youssef Meite, who clocked a season’s best of 9.98.

You had to feel a little bit for Eefje Boons of The Netherlands and Noemi Zbaren of Switzerland as they lined up in the women’s 100m hurdles against six high-flying US athletes.

Despite some initial confusion in which Rio 2016 bronze medallist Kristi Castlin was credited with victory, the win was actually achieved by Sharika Nelvis in a season’s best of 12.53, with compatriots Jasmin Stowers and Christina Manning second and third in 12.57 and 12.58, and Castlin fifth in 12.61.

Incredible strength in depth here for the US – even without their world record holder Keni Harrison, who ran the world’s fastest mark of the season, 12.28, in Hungary on Tuesday (July 4).