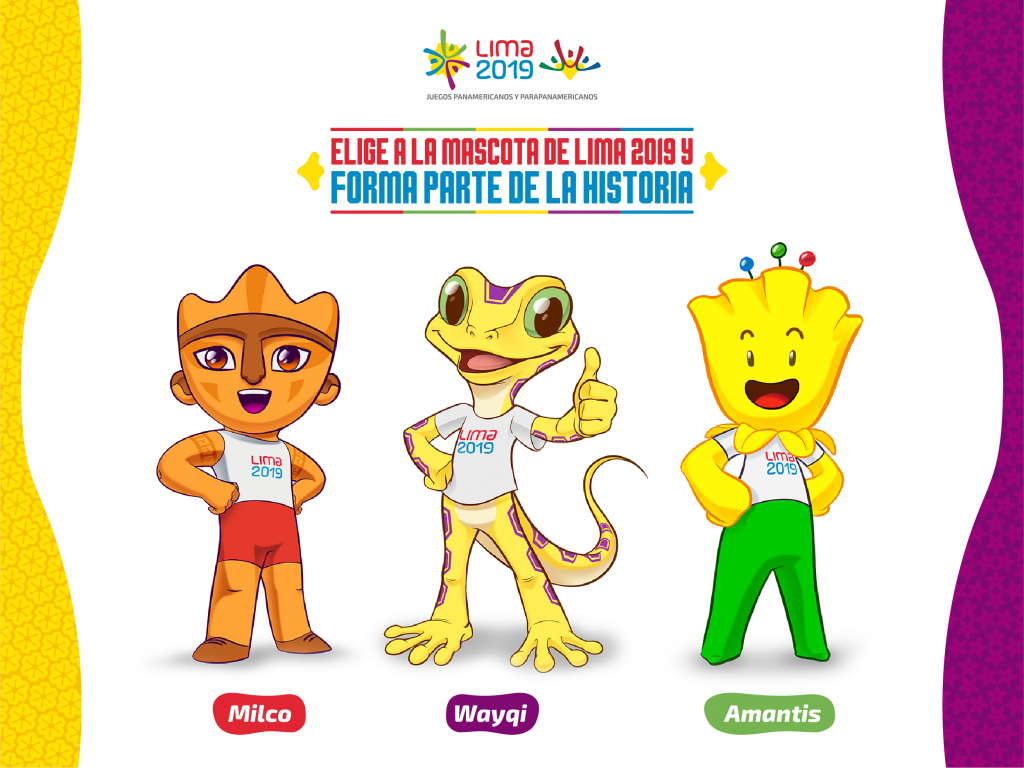 Organisers of the Lima 2019 Pan American and Parapan American Games have revealed the final three mascots from its design competition, selected from more than 1,000 entries submitted from people across Peru.

Among the three shortlisted designs is "Milco", inspired by traditional Cuchimilco sculptures.

The flower "Amantis" and "Wayqi", a Lima leaf-toed gecko, complete the line-up.

The final and winning mascot will be decided through a popular vote by the Peruvian public, who have until July 25 to select their favourite entry.

The public design competition ran from February to May with the three finalists then selected by a panel of judges consisting of representatives from Lima 2019, the University of Lima, Instituto San Ignacio de Loyola University and Toulouse Lautrec University.

"Lima 2019 is thrilled to announce the final shortlist of three great mascots from what has been an exciting and very competitive public competition," Lima 2019 President Carlos Neuhaus said.

"We have had a brilliant response from the people of Peru who submitted more than 1,000 entries and we are delighted with the levels of engagement we have seen.

"It has been wonderful to see the enthusiasm shown towards the competition and we are beginning to feel the anticipation and excitement building up as we approach the two-year mark until the Opening Ceremony of the Games.

"This is another step along Lima’s journey to delivering a world class event in 2019 and the whole country is getting behind us.

"I cannot wait to see who the public chooses as Lima 2019's official mascot next month."

The first finalist was submitted by Andrea Norka Medrano Moy from the district of Los Olivos in Lima Province.

It is claimed it represents family and is believed to keep bad energies at bay.

The second finalist was designed by Lima's Andy Alegre Campos Maverick, who named his mascot Amantis.

It is inspired by a native plant from the coastal hills of Peru.

Often cultivated, the plant is used for cosmetic and medicinal purposes by the local population.

The third finalist was submitted by Alfredo Vitor Ayala, who lives in Peru's second most populous city Arequipa.

The mascot, Wayqi, is inspired by the Lima leaf-toed gecko, a rare lizard found in archaeological sites located near the Rímac and Lurín rivers.

Voting is due to begin on June 19 and will be open to members of the public from Peru who can submit their choice via the Lima 2019 website here.

The winner is scheduled to be announced on July 26, exactly two years before the Lima 2019 Opening Ceremony.

Pachi, a porcupine, was the mascot for 2015 Pan American and Parapan American Games in Toronto in Canada.

Huichi, Gavo, and Leo were the symbols of the 2011 Games in Mexican city Guadalajara.

They represented a blue agave plant, a deer and a lion.