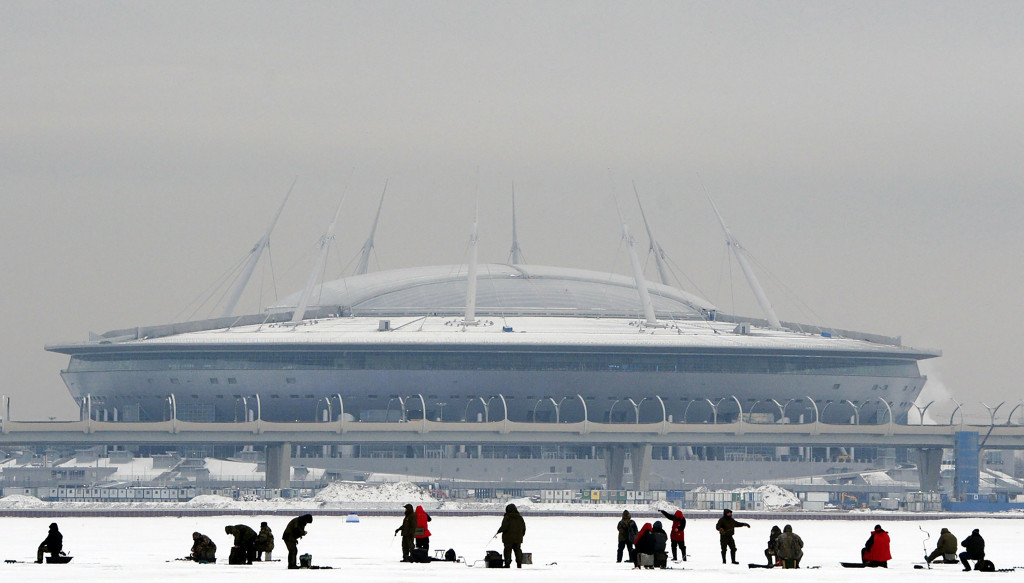 It also highlights several months' delays in payment of wages, work in temperatures as cold as minus-25 degrees celsius without sufficient protections and employers’ failure to provide contracts required for legal employment.

FIFA unveiled a monitoring system last year to oversee labour conditions at the Russia 2018 World Cup stadiums and insists it has helped to improve standards.

But New York City-based HRW has said in a statement that football's global governing body has not delivered on commitments to "conduct effective monitoring of labour conditions ahead of the Confederations Cup and World Cup".

"FIFA’s promise to make human rights a centerpiece of its global operations has been put to the test in Russia, and FIFA is coming up short," Jane Buchanan, associate Europe and Central Asia director at HRW, said.

"Construction workers on World Cup stadiums face exploitation and abuse and FIFA has not yet shown that it can effectively monitor, prevent and remedy these issues."

In response, FIFA has said: "While incompliances with relevant labour standards continue to be found - something to be expected in a project of this scale - the overall message of exploitation on the construction sites portrayed by HRW does not correspond with FIFA’s assessment, which is based on the quarterly inspections conducted by independent experts and trade union representatives."

The governing body went onto say that "particularly severe or recurring issues among contractors" are being directed to Russian authorities, who have the responsibility to "protect human and labour rights" in their territories.

HRW interviewed Russian nationals, including some who had migrated internally for jobs on World Cup construction, as well as foreign workers, including some from central Asian countries, Belarus and Ukraine.

At least 17 workers have died on World Cup stadium sites, according to the Building and Wood Workers’ International global union.

Workers on several stadiums have organised strikes repeatedly to protest non-payment of wages and other labour abuses.

In May, FIFA claimed North Korean citizens are no longer working at the construction site for the St Petersburg Stadium - but admitted they were made aware of potential human rights issues involving employees from the nation in November.

It followed reports that workers from the Asian nation helping to build the venue, set to be a key facility for Russia 2018, were being kept in appalling conditions.

According to the official Russian news agency TASS, FIFA conceded that they were made aware of the presence of North Koreans at the construction site in a letter written by President Gianni Infantino to the heads of the Football Associations in Sweden, Denmark, Norway, and Iceland.

Earlier this year, Norwegian magazine Josimar conducted an investigation, where they interviewed workers from North Korea about their working conditions.

They said the employees from North Korea were treated like "slaves" and "hostages".

FIFA confirmed there were no North Koreans working on any of the other 2018 World Cup construction sites, while the organisation condemned any human rights abuses.

Workers interviewed by HRW consistently said that they were afraid to speak out about abuses, fearing reprisals from their employers.

In response to the inquiries, FIFA sent HRW a letter on June 8 describing its labour monitoring system.

"The letter states that FIFA conducted dozens of inspections on World Cup stadiums," the HRW said.

"It included two examples in which FIFA said it resolved issues revealed by the monitoring process.

"FIFA has otherwise not published comprehensive details on the kinds of labour abuses inspectors found; on which stadium sites they found violations and when; specific actions FIFA or others took in response; or concrete outcomes for workers.

"FIFA’s programme began well after much World Cup construction was underway and covers only stadiums and no other World Cup infrastructure construction."

The International Covenant on Economic, Social and Cultural Rights, to which Russia is a party, recognises "the right of everyone to the enjoyment of just and favourable conditions of work".

Russia is also party to numerous International Labour Organization conventions, including related to wages and occupational health and safety.

"FIFA and the Russian Government took a notable step in organising labour monitoring on World Cup stadiums, but to be credible, FIFA needs to make public detailed information about its inspections, what inspectors have found, and the actual results, if any, for workers," Buchanan added.

"There could not be a better time for FIFA to move away from the secrecy that has plagued its operations and to show it can achieve meaningful protections for workers, and be transparent and accountable."

The 2017 Confederations Cup is due to begin on Saturday (June 17) and last until July 2.

Moscow, St Petersburg, Kazan and Sochi will all host matches during the event, which marks the one-year countdown to the 2018 World Cup.

The World Cup, scheduled to be held from June 14 to July 15, will see 32 teams play in 12 stadiums across 11 Russian cities.