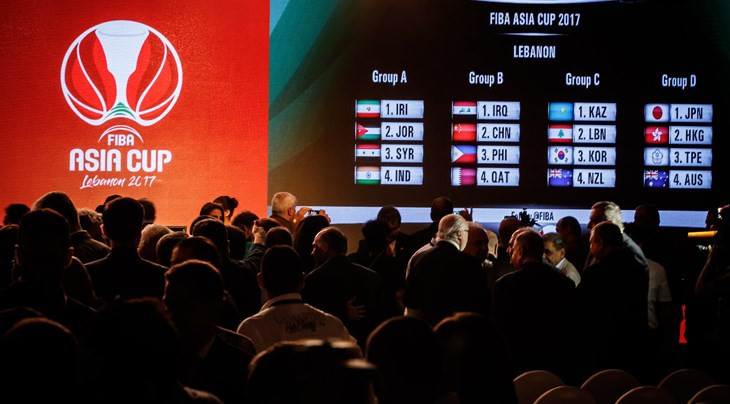 Defending champions China have been drawn against Iraq, 2015 runners-up The Philippines and Qatar in Group B for this year’s International Basketball Federation (FIBA) Asia Cup.

The event, which is scheduled to take place in Lebanon from August 8 to 20, will be the first-ever Asia-Oceania joint continental Championship with 16 teams, including Australia and New Zealand, battling it out for top honours.

It also saw the 2015 bronze medallists Iran pitted against Jordan, Syria and India in Group A and hosts Lebanon put into Group C alongside Kazakhstan, South Korea and New Zealand.

Completing the line-up are the Group D quartet of Japan, Hong Kong, Chinese Taipei and Australia.

The top three three teams from each group will then advance to the second phase where they will be divided into two groups; E and F.

The tournament will be played in a knockout format from the quarter-finals onwards.

During the official draw ceremony, the newly-designed FIBA Asia Cup trophy was unveiled.

The trophy is 55 centimetres high and made almost entirely out of silver.

It features a silver-plated band engraved with the trophy name and a gold-plated band in which "Federation Internationale de Basketball Amateur" is written, a mark that is consistent across all FIBA’s continental trophies.

The trophy was designed by Radiant Studios Ltd. and handcrafted by silversmiths Thomas Lyte.

Both companies are based in London.

It is claimed the logo draws inspiration from the Lebanese flag, "flapping in the wind like the wings of the phoenix, with its red stripes morphing into the shape of a ball, letting the cup rise in its heart".

The official mascot of the tournament, Ox The Fox, is said to symbolise great team spirit and is described as quick, agile and smart - three qualities considered essential for any basketball player.

China beat the Philippines 78-67 in the final of the 2015 tournament in front of a home crowd in Changsha.

Iran, winners of three of the last five editions, overcame Japan 68-63 in the bronze medal match.