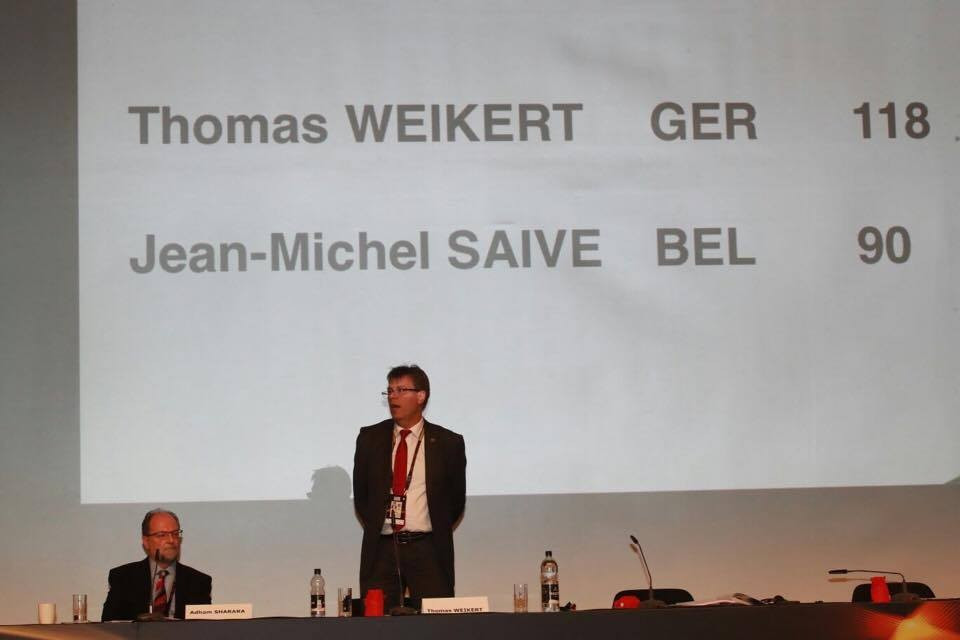 The German received 118 of 208 votes cast to defeat his Belgian opponent, who received 90, at today's Annual General Meeting (AGM).

It is the first time the 55-year-old has been elected into the role after replacing Adham Sharara as President mid-term in 2014.

The eight chosen vice-presidents out of the 14 contenders were also the exact eight proposed by Weikert.

These, in order of votes received, were Shi Zhihao of China, Petra Sörling of Sweden, Masahiro Maehara of Japan, Nestor Tenca of Argentina, Bruce Burton of Canada, James Morris of New Zealand, Alaa Meshref of Egypt and Khalil Al-Mohannadi of Qatar.

It took four hours for the votes to be counted.

"I would like to thank my team for all the support they have given me since becoming President," Weikert said.

"Thank you to all the National Associations for their confidence in me to continue as President.

"I promise to keep giving my best to push the sport to new heights and achieve all my goals stated in my manifesto."

The former German Table Tennis Federation President also claimed afterwards that he planned to serve just one term in office and will not stand again in 2021.

Saive  did not rule out a repeat bid.

"I'm just proud of what I did as you have to have some courage to go against a sitting President," the 47-year-old told insidethegames.

"Of course I had the feeling it was not really an equal battle, it was a bit like David versus Goliath.

"I think I have showed that athletes can challenge, and we must be supported."

Weikert's administrative experience in comparison with an opponent who has never held an ITTF position was considered key.

Both candidates were given 10 minutes to address the floor before voting began using a manual non-electronic system.

A timing system and one-minute warning system ensured their presentations did not overrun.

Weikert, drawn to speak first, gave a polished and well-structured performance in which he emphasised the continuity and stability he promises to bring to the sport.

"I want the ITTF to thrive in modern world," he said.

"This requires strong leadership and experience in the Olympic Movement.

"These are qualities I possess and I will bring continuity and stability.

"My plan is to deliver for table tennis with a clear strategic plan and seven key pillars."

Weikert promised to prioritise "integrity, good governance and transparency" because "people and media want to trust the sport they watch".

He added: "You can trust me to apply all my international sports and management experience to bring success."

Saive's speech was more emotional and passionate as he started with an anecdote about how his mother won a Belgian national title while pregnant with him.

"I have table tennis in my genes," he told delegates.

Saive pledged to double development funding, work with manufacturers to resolve problems regarding table tennis balls and avoid any competition rule changes for the next three years.

"I really I hope can be your new ITTF President and that we can do it together," he concluded.

Ultimately, though, the speeches made little difference in a contest full of political games and electioneering.

A row between Weikert and Sharara, who became the first ITTF chair after resigning as President, was one factor overshadowing proceedings.

The pair used to be close allies but Weikert has repeatedly accused the Canadian of masterminding Saive's campaign in recent weeks.

insidethegames has been told that, when Sharara extended his hand to shake Weikert's immediately after it was announced he had been elected President, the German shouted "you wanted to destroy me" and refused to embrace him.

Weikert did, however, join a standing ovation soon afterwards to mark Sharara's departure as chair.

A process is now beginning to select a replacement.

Sharara chaired all of the AGM today except for the election portion, and there were several occasions when a difference of opinion emerged.

This included whether four countries officially rubber-stamped as ITTF members today - Eritrea, Guinea-Bissau, Cape Verde and Bahamas - could vote in the subsequent elections.

Weikert had said they could not but Sharara interjected to cite the ITTF constitution and successfully argue that they could, although Cape Verde were the only one of the four to do so as only they had a voting delegates present.

Only 161 countries were represented in person, with the other 47 voters doing so via a pre-determined proxy.

A first meeting of the new ITTF Executive Committee is due to take place on Monday (June 5).

The new panel are all going out for dinner with International Olympic Committee President Thomas Bach this evening, who is embarking on a "low key" visit to the World Championships here tomorrow.