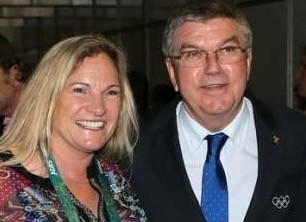 Thirty years ago there had never been a Women's World Championship in weightlifting.

Until Sydney 2000 there were no women's contests on the Olympic programme.

But women make up half of all medal events now, and 40 per cent of all registered weightlifters in the United States, the nation with the most members, are female.

There will be another landmark tomorrow.

For the first time in its 112 years of existence the International Weightlifting Federation (IWF) will have at least one female vice-president and at least two women on the Executive Board.

There could be more, as there are 20 female candidates for a range of Committees, with three running for vice-president and five standing for the Executive Board at the IWF elections here in Thailand's capital.

Hungary's Tamás Aján has been at the IWF for the entire period of this birth and growth of women's weightlifting and is standing for a fifth term as President in tomorrow's elections.

The three women standing for vice-president are, besides being dedicated professionals in sport, a poet, a keen walker and a lover of Colombian vallenato music - respectively Ursula Papandrea from the US, Moira Lassen from Canada and Ana Camacho from Colombia.

All three have already made their mark in the weightlifting world.

Papandrea was an international athlete in the 1990s and was part of the "big push" for women's weightlifting to gain Olympic recognition.

Camacho was President of the Colombian Federation during years of great success, including last year's Olympic Games gold medal for Oscar Figueroa.

At the last elections in 2013, Lassen, who was technical officials group leader at the London 2012 Olympics and currently holds a senior post at the Gold Coast 2018 Commonwealth Games, became the first female member of the IWF's 21-strong Executive Board.

"The chances of having more than 10 per cent representation on the Executive Board and all the Committees are slim.

"I have been on the Executive Board for four years and, more often than not, I will hear everybody addressed as 'gentlemen' at meetings.

"It irked me to start with but I have bigger fish to fry than worrying about that.

"Triathlon is the only sport in the Summer Olympics with a woman President, and they are doing wonderful things in triathlon.

"For sure a woman could be President of the IWF in future, but it takes time.

"It's a matter of going up the rungs one by one.

"It's for Member Federations to see that women can have a chance to reach that level, and the hardest part is changing their mindset."

Lassen has been up many rungs herself.

She started as a volunteer in the Yukon Weightlifting Association when her daughter, Jeane, took up the sport.

Despite the challenges of no funding, no office, no full-time paid staff and no national coach, Lassen helped the Canadian Weightlifting Federation to send a strong team to the Beijing 2008 Olympic Games.

"I was a technical official and Jeane was competing - the first mother and daughter weightlifting team at an Olympic Games," she said.

Canada won a medal at those Games, belatedly, when Christine Girard was promoted from fourth place to third last summer because of doping infringements revealed by the retesting of samples.

Girard was also promoted, from bronze to gold, after the London 2012 retests.

Lassen has twice been invited to Women in Leadership forums staged by the International Olympic Committee, whose target is to have 30 per cent of females in decision-making roles in sports on the Olympic programme.

"The forums are very important," she said.

"An excellent environment to realise that just because you are the only woman at your sport decision-making table, it doesn't mean you are alone in your journey."

Camacho, 57, has worked in Colombian sport for 30 years.

Women's weightlifting has a high status because Colombia's first Olympic gold medal in any sport was won by a female weightlifter, Maria Isabel Urrutia, in 2000.

"Women have earned their place on the Executive Board on merit, said Camacho.

"Women are more organised, and we achieve what we propose.

"It's important that the women athletes feel represented in the IWF.

"There is an imbalance in sports administration - we must fight for equality."

Papandrea was a competitive lifter from 1987 to 2000, though she stopped competing internationally four years before the landmark Sydney Olympics.

"We were part of the push, that generation of female lifters," she said.

"Our main goal while competing in the 1990s was to see women's weightlifting in the Olympics.

"You are in a movement for the sake of it, not for personal benefit.

"Very few women from that period actually made it to the Olympics."

Her first husband was a Belarussian Olympic lifter who gave her an invaluable insight into the culture of weightlifting in former Soviet republics.

Papandrea has also been a groundbreaking coach, leading her Texas Barbell team to the men's National Championship, and achieving a higher level of coaching qualification than any before her.

She was the first full-term female President elected by USA Weightlifting.

"I have been able to break barriers by performance," she said.

She has a "super busy" mind and has written a lot of poetry, some of it "about me as a weightlifter, about the work you put into it.

"Sometimes I write little philosophical statements, and often they apply to weightlifting."

A balanced representation for women in weightlifting is still a long way off, and that is to be expected, said Papandrea, who at university mastered in political science and minored in political philosophy.

"I am fairly patient when it comes to process.

"I consider myself quite liberal, but I am aware that the process is slow and conservative and for a good reason.

"I understand that for things to be entrenched you need roots, and roots take time to grow."