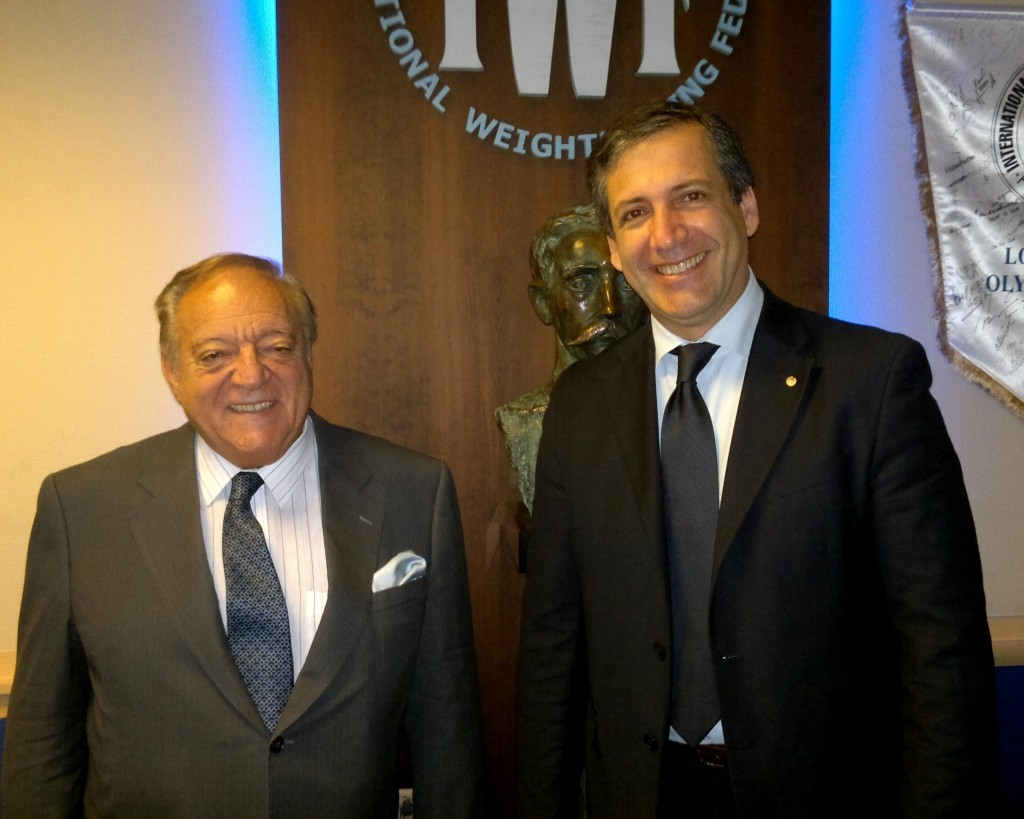 The Italian candidate Antonio Urso has made one last push in his campaign to be elected President of the International Weightlifting Federation (IWF) by setting out his plans for a new system of Olympic qualification, based on individual rather than national performance.

Meanwhile, the man who aims to retain his position for a fifth term, the Hungarian Tamas Aján, has been busy making changes.

In the past few days Aján has overseen the introduction of a new aid in the fight against doping and signed a three-year broadcasting deal for the sport.

Currently team points, gained over a series of events, earn most of the places.

"Judo and wrestling use individual performance for their qualifying, and we should be more like them," said Urso.

"There would be much more media interest if we had ranking lists that were constantly updating – the public could follow it easily."

The campaigning will end at the weekend and delegates from 187 member nations will cast their votes on Monday at the IWF elections at the Grand Four Wings Convention Hotel in Bangkok in Thailand.

It is seen by many delegates as the most important election in the history of the IWF, founded in 1905.

While Aján remains outwardly positive about the sport, one of the men standing against him, the Iranian Ali Moradi, said: "The IWF is currently going through the deepest crisis of its over-100 year history.

"The image and reputation of the organisation and our sport have been severely tarnished."

Others have made similar statements throughout an election campaign that has been described as "brutal" by one of the leading nation’s delegates.

The prevalence of doping within weightlifting, and the negative publicity it generates, is the main driver of complaints.

Moradi is standing not just for President, but for four other roles - general secretary, first vice-president, vice-president and a place on the Executive Board.

His multiple entries suggest he is not a leading candidate for President.

Of the others Nicu Vlad, the Romanian winner of an Olympic gold medal at Los Angeles 1984, is also standing for other roles but could pull in plenty of support if rivals withdraw from the Presidential contest.

He is currently first vice-president, the most senior position below President.

China’s Ma Wenguang is thought to be more of a contender for general secretary, the Asian Federation President Mohammed Yousef Al-Mana of Qatar will have supporters, while Monico Puentevella of the Philippines has not been a prominent campaigner.

The two main contenders are Urso, the 55-year-old President of the European Weightlifting Federation, and Aján.

Hungarian Aján, 78, has been general secretary or President of the IWF since 1976.

"No one man can stay in charge for more than 40 years, whoever he is," said Urso, who said he has more support this time.

Vlad, 53, stressed the need for unity within the sport.

"There are splits all around the world," he said.

Aján said he still has a lot of ideas up his sleeve and believes he is the right man to lead the IWF.

"I have submitted my candidature because I want to keep on serving the Federation and weightlifting," he said.

"I have a lot of ideas and projects that I could and would like to realise."

Earlier this week, the IWF announced a new broadcast deal with Lagardere, which will include a "re-imagining" of the Grand Prix series of events.

A few days earlier the IWF website opened a new tab for anybody to report, confidentially, suspected cheating by lifters or their entourage.

There are signs of improvement in doping.

Weightlifting background: Has been an official for 20 years and holds many senior roles. Al-Mana, a senior investigator in the Qatar police, is President of the Qatar, Arab, Afro-Asian and Asian Weightlifting Federations. He has been a member of the IWF Executive Board since 2011.

Weightlifting background: One of the sport’s great lifters, Vlad won an Olympic gold medal at Los Angeles 1984 in the 90 kilograms, followed by silver in the 100kg at Seoul 1988, fourth place in the110kg at Barcelona 1992, and bronze in the 108kg at Atlanta 1996, after which he retired. He was three times gold medallist at the World Championships, twice a European champion, and also won a Commonwealth Games gold medal for Australia at Victoria 1994. He took dual citizenship in 1991 and lived in Australia for five years. Vlad is a member of the IWF Hall of Fame.

Vlad was also national coach of Romania from 1998 to 2016 and has been President of the Romanian Federation for 20 years.

In his first lift as a 14-year-old schoolboy in 1978, in his home town of Piscu Galati, Vlad clean and jerked 42kg. Eight years later he twice came close to lifting 200kg more. "I made the clean twice on 242kg, but I missed the jerk. It would have been a world record," he said.

At the height of his career he was said by respected coaches to be the most technical lifter in the sport, especially in the snatch.

Views on doping: Romania has a poor record with 18 positives since 2003, including two for Gabriel Sincraian, who lost his 85kg Olympic bronze medal after testing positive at Rio 2016.  Vlad believes the IWF’s anti-doping programme should be handed over to World Anti-Doping Agency (WADA). "This can be done, and I believe in it." He says the culture is changing in Romania and the key is educating lifters and coaches. "We have many seminars – the last one was two weeks ago. If we explain more, educate more, the positives will be less."

Main campaigning points: Unity within the IWF, and education.

Other interests: "I like nature, being in the mountains, fishing and hunting."

Weightlifting background: Aján has been an official in the Hungarian Federation and, since 1976, the IWF, for 54 years. He has written and lectured on the sport extensively, and has been in charge during a period when women went from not being recognised in the sport to gender equality in terms of medal events.

He was first elected as President of the IWF in 2000 and this is his fifth election. His critics, including Urso, have expressed respect for his achievements.

Aján qualified as a doctor of political science in Budapest before he started his career in sporting administration. He is an honorary member of the International Olympic Committee and a Foundation Board member of WADA.

Main campaigning points: Establishing women’s weightlifting in all member nations; more money for development projects; standardised coaching qualifications; revamping the Grand Prix series. "I have a lot of ideas and projects that I could and would like to realise, for instance in management, governance, and financial support to the sport."

Other interests: Playing the piano, especially jazz and popular songs.

Weightlifting background: Started aged 12 in his home town of Caltanisetta in Sicily, where weightlifting is the most popular sport. Was Italian champion nine times between 1977 and 1989. As national women’s team coach he led Italy to their first European medals in the 1990s. Heads the medical and science institute at Italy’s Olympic Committee. Urso has written eight books on weightlifting and is working on a ninth, on training young people. He became President of the Italian Federation in 2005 and of the European Federation in 2008.

Views on doping: "This is the cancer of our sport and we must eliminate and destroy it." Urso wants WADA to take over the sport’s anti-doping programme. He is particularly keen on suspending coaches and doctors associated with athletes who test positive, and is scathing in his criticism of the IWF’s current anti-doping efforts.

Main campaigning points: A new governance model for the IWF, a complete overhaul of communications, marketing and sponsorship; more transparency, more collaboration, a stronger focus on development and more money for continental federations. Training and licensing coaches at a new International school of weightlifting.

Other interests: Urso has a professional level recording studio at his home in Rome and is working with others on producing a double DVD on the history of the saxophone. He plays guitar and piano and is a fan of, among others, Bob Dylan.