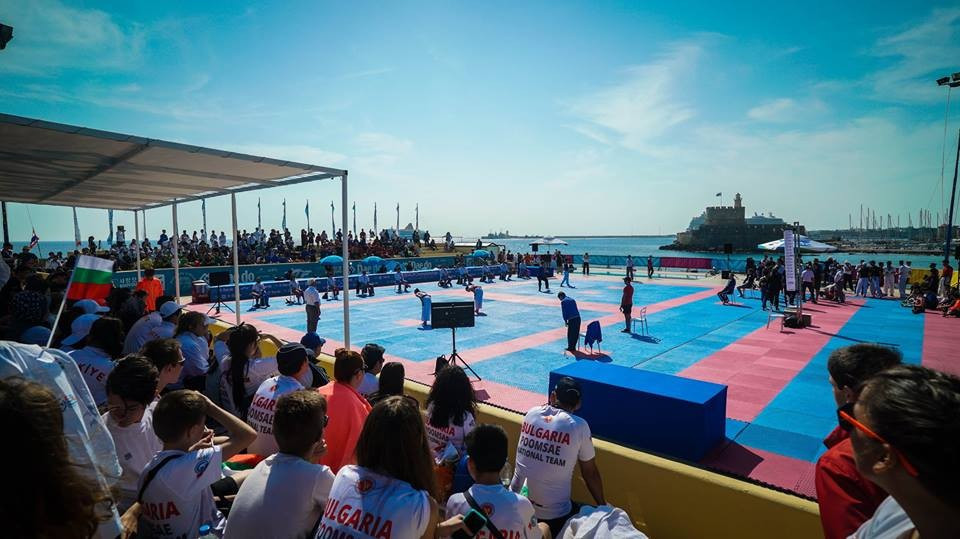 Spain's Samuel Meilan Fernandez was victorious on the opening day of the inaugural World Beach Taekwondo Championships on the Greek island of Rhodes.

Meilan Fernandez was too strong in the over-30 recognised poomsae event at the Nautical Club of Rhodes.

In the women's recognised poomsae competition, Thailand's Phenkanya Phaisankiattikun was victorious in the under-17 category while Serim Olgun Kahveci of Turkey prevailed in the over-30 division.

There was also action in freestyle poomsae events.

During yesterday's Opening Ceremony, all participants were able to give a message of peace as part of the Peace and Sport White Card campaign.

The 400 metres squared white cotton sheet used for the image, involving athletes and organisers, was unfurled in the Bastion of the Grand Master's Palace.

It will now be cut into 80 bed sheets and sent to the Kiziba Refugee Camp in Rwanda, where the Taekwondo Humanitarian Foundation runs a pilot project, known as the Kiziba Taekwondo Academy.

“This is a fantastic initiative that we as the World Taekwondo Federation (WTF) are happy to support," said WTF President Chungwon Choue.

"This will be the first ever World Taekwondo Beach Championship, so it is an important moment for us as a Federation, and to be able to use it as a vehicle to spread the peace through sport movement is an honour for us."

Action at the World Beach Taekwondo Championships is due to conclude tomorrow.

The event comes just before the 2017 European Taekwondo Union European Poomsae Championships, which are also set to be hosted by Rhodes from May 7 to 8.