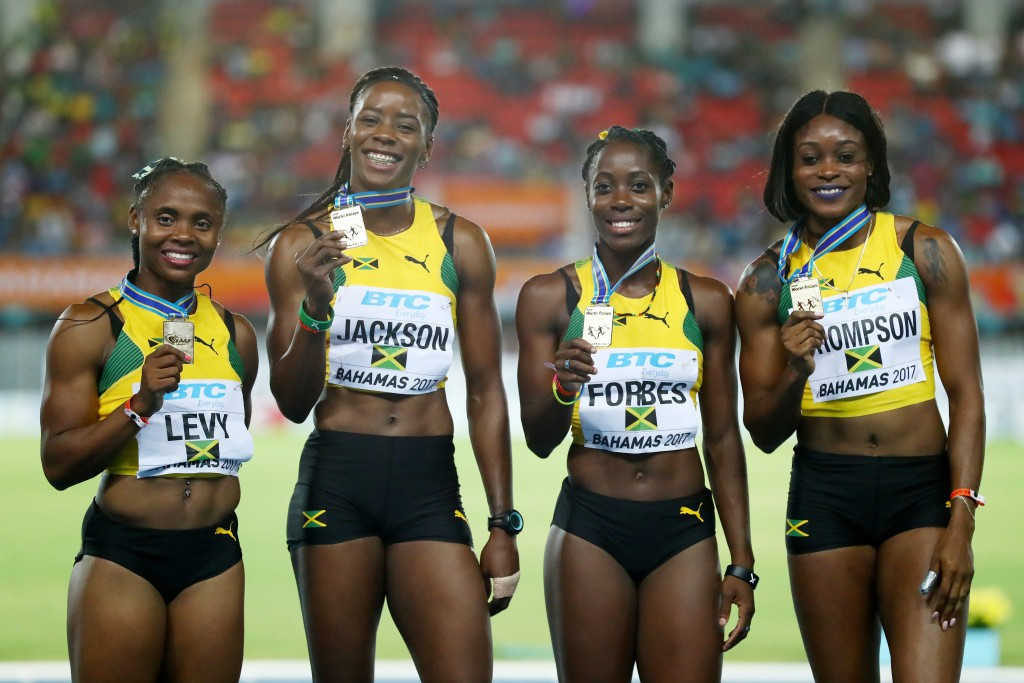 Jamaica’s Olympic 100 and 200 metres champion Elaine Thompson brought home the baton with ease to earn the 4x200m title at the third International Association of Athletics Federations World Relays at the Thomas Robinson Stadium in Nassau in an event record of 1min 29.04sec on a night when her compatriots in the men’s 4x100m, the world and Olympic champions, crashed out in the heats.

There was disappointment too for the hosts as The Bahamas men’s 4x400m team, whose glorious tradition includes victory in the Olympics at London 2012, narrowly failed to reach the final.

Thompson inherited a half second lead as she took the baton in the final leg and extended it by another second to finish well clear of the surprise package, Germany, who clocked 1:30.68, and the United States.

"We made sure we secured a spot in the finals earlier tonight and just came and do what we do," Thompson said.

The USmen’s 4x100m team, disqualified in the last world and Olympic finals for faulty baton exchanges, got its technique right to retain the title; this time round it was the turn of all the principal US rivals to foul out.

And after Britain’s challenge came to grief in the final handover as 20-year-old anchor Ojie Edoburun set off too early for the incoming Danny Talbot, Gatlin had the formality of bring the stick home to cross in 38.43, with Barbados second in 39.18 and China third in 39.22.

These were costly mistakes, as all three errant teams missed out on an early qualification for the IAAF World Championships in London this summer.

The five finishers in the final - Australia and France were fourth and fifth - will be joined in London by the top three in the B final - Trinidad and Tobago, Germany and The Bahamas.

The American women’s 4x800m team easily earned a third consecutive title after the 2014 world indoor champion, Chanelle Price, had got them off to a dominant start with a 2:01.73 split, and they finished almost four seconds clear in 8:16.36..

World champion Maryna Arzamazova anchored Belarus to second place in 8:20.07 ahead of Australia, who clocked 8:21.08.

The noise level rose significantly in the semi-final of the 4x400m as The Bahamas’ 21-year-old Steven Gardiner, who heads the current world lists with a national record of 44.26sec set on April 8, gave everything on the final leg.

But, although Gardiner moved past Belgium’s Kevin Borlee in the final strides, he could not finish ahead of the two automatic qualifiers France and Britain.

Trinidad and Tobago produced a shock in the second heat as they overhauled the defending champions United States. Both went safely through, however, and will be joined by Botswana, third heat winners, and Jamaica.

To home regrets, Brazil earned the second and final non-automatic qualifying place with third place in the last leg in 3:05.05 - 0.32 faster than the hosts.

But again there was home disappointment as, despite being given a three-stride lead by the first leg of Olympic champion Shaunae Miller-Uibo, The Bahamas could not do enough to qualify.

Meanwhile the Athlete Refugee Team, frustrated in its wish to contest last month’s IAAF World Cross Country Championships due to red tape, is preparing for action in the men’s 4x800m final, where its runners will wear on-body cameras

Gai Nyang, a 25-year-old from South Sudan who set off from his refugee camp in northern Kenya earlier this week along with Wiyual Puok, Dominic Lokinyomo and Paulo Amotun, will run the first leg for the team on Sunday night when the quartet will line up alongside middle distance powerhouses like the US, Kenya and Poland.

"I used to watch some of these athletes on TV," said Nyang.

"But now I see them and I see they’re just people like me."

The team’s participation has been made possible by a collaboration between the Tegla Loroupe Peace Foundation and IAAF’s Athletics for a Better World programme.

In 2014 the foundation was granted $20,000 (£15,500/€19,000) by the IAAF to run a kids’ athletics programme inside refugee camps in Northern Kenya, with extra funding delivered this year to enable a team to participate in Nassau.