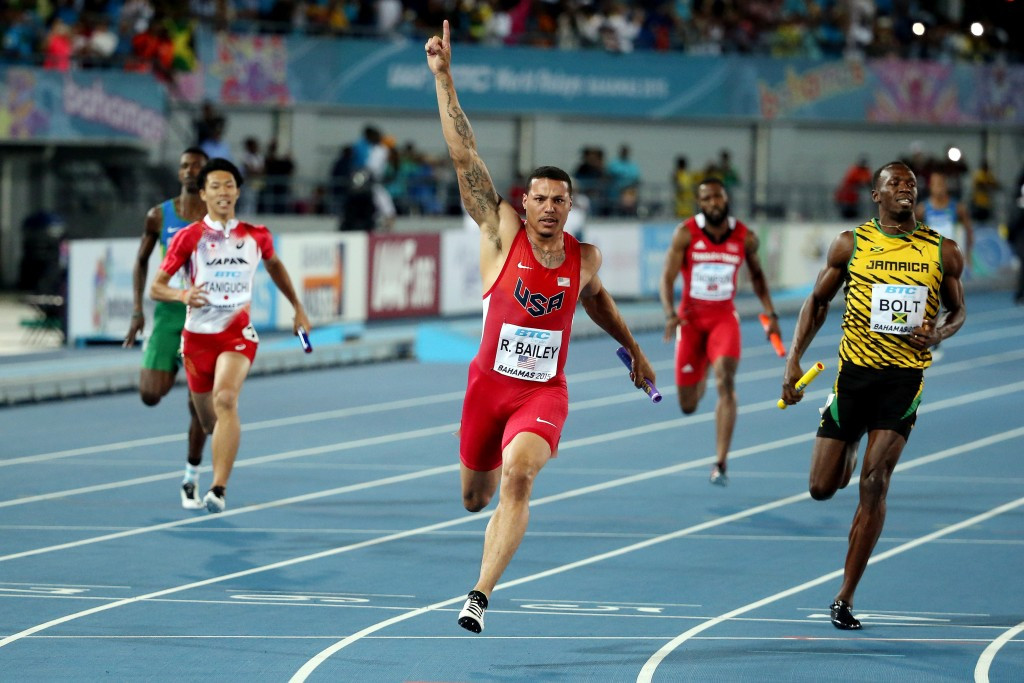 Usain Bolt suffered the unfamiliar feeling of defeat at the International Association of Athletics Federation’s (IAAF) World Relays in Nassau as a United States 4x100 metres team boosted by an inspired second leg from the controversial figure of Justin Gatlin won the event in 37.38 seconds, beating the Championship record set by Jamaica in last year’s inaugural running.

Gatlin, whose recent award of a new contract from Nike despite having incurred two doping suspensions attracted widespread criticism, tipped the balance of the final as he pulled clear of Jamaica’s Commonwealth champion Kemar Bailey-Cole almost immediately after the first exchange and then put a huge margin between himself and the rest of the field.

Tyson Gay - also a controversial figure having had his two-year doping ban of 2013 reduced by half following “significant assistance” to US anti-doping authorities - consolidated the US lead around the bend and gave anchor runner Ryan Bailey a lead of several metres over Bolt.

The 28-year-old world record holder - who competed only three times last year because of hamstring and foot problems - reduced the deficit by a metre or so to clock 37.68sec.

It was inside the previous Championship record, but that will be of little consolation.

On the eve of competition, Bolt had described those who had suggested he would not regain the heights he reached in setting his 100 and 200m world records in 2009 as “disrespectful".

"It was just that I had a bad season like any athlete and lost the form I need to get back.

“A lot of people said ‘Bolt was gone’ but I was never gone.

"I need to get back in shape and I’ll be all right.

“I definitely think people have been disrespectful.

"But I'm going to keep my calm, not be aggressive and be nice to everybody.

"But they’ll push the wrong button one day and we’ll see what happens.”

For the US team, whose first leg runner was Mike Rodgers, this was a morale-boosting victory - after a string of high profile disqualifications - ahead of the summer’s IAAF World Championships.

Japan took bronze in 38.20, displaying slick baton passing skills after being given a great start by their lead-off runner Kazuma Oseto.

All eight finalists were winners, however, in the sense that they gained qualification to the Rio 2016 Olympic Games.

Those finalists did not include Great Britain, who narrowly missed out on qualification from the heats.

It was a bleak first night at the IAAF World Relays for Jamaica, who failed to win a single event as the United States won three of the first four finals.

The Americans might have had a clean sweep on the night, but they came to grief in the women’s 4x200m final as Jeneba Tarmoh, with a comfortable lead, attempted to hand over to final leg runner and Olympic champion Allyson Felix.

Felix could not get a firm grip on the baton, and Tarmoh then bumped into her, knocking her over.

Despite having multiple world and Olympic champion Veronica Campbell-Brown in their quartet, Jamaica were unable to take advantage, being beaten by a Nigerian quartet, including world bronze medallist Blessing Okagbare, which clocked 1min 30.52sec, taking two seconds off their national record.

The Bahamas raised the noise level in the Thomas Robinson Stadium as they finished second, but they were subsequently disqualified for a faulty second changeover, leaving silver to Jamaica.

It was a disappointing night too for Kenya, last year’s winners of the 4x800m, who finished second behind the US and were then disqualified for a faulty changeover between Nicholas Kipkoech and 2012 Olympic bronze medallist Timothy Kitum.