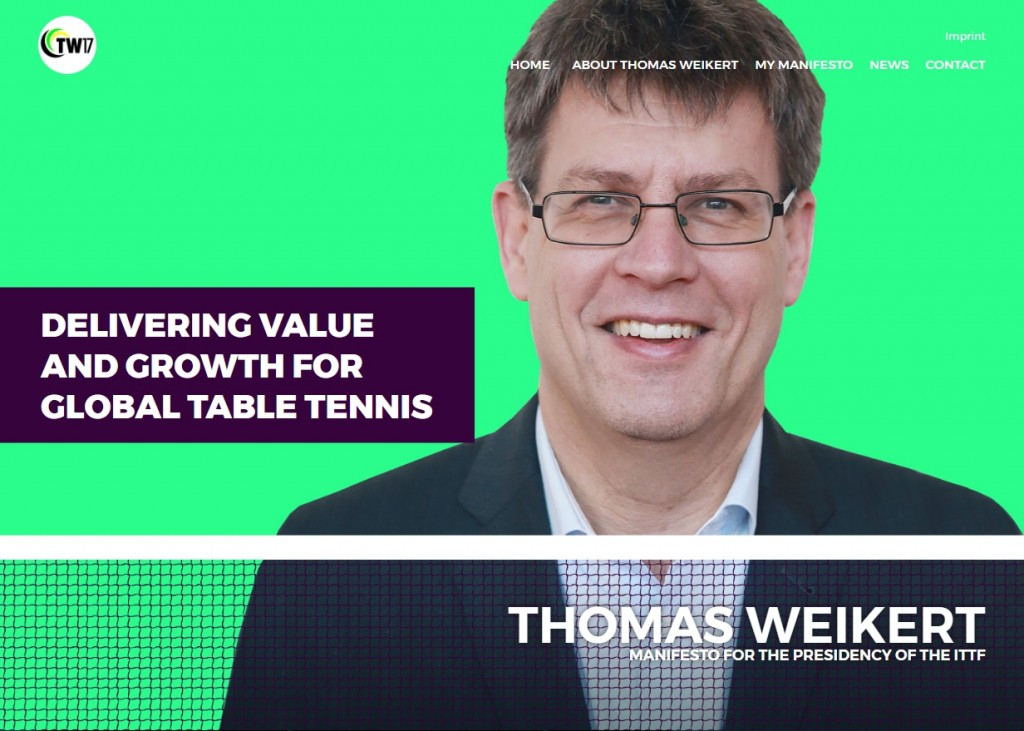 International Table Tennis Federation (ITTF) President Thomas Weikert has unveiled his new campaign website as he steps up his bid to be re-elected head of the world governing body for a fresh term.

The launch of the website, accessible here, follows the publication of the German’s election manifesto earlier this month.

It is said to re-affirm Weikert’s overall Presidential vision, "Delivering Value and Growth for Global Table Tennis", and sets out his key manifesto pillars - expressed as a seven-point plan.

The website also features downloadable versions of Weikert’s manifesto in English, Chinese, Arabic, French and Spanish, while his seven key re-election pillars feature on a dedicated "My Manifesto" webpage.

Among the pillars set out are fuelling the development of table tennis and empowering National Associations, setting the highest standards of governance, integrity and transparency, and ensuring stability, continuity and positive Olympic-International Olympic Committee (IOC) relations.

Also pledged is the maximising of commercial and marketing opportunities, enhancing the presentation of the sport, engaging audiences digitally and attracting younger fans, and developing Para-table tennis.

Discussing the launch of the website, Weikert, ITTF President since September 2014, said: "This is an important moment in my election campaign.

"I have set out the blueprint for how I believe the federation should be run, and this website will bring to life my vision for the development of table tennis and the ITTF.

"I believe in openness and full transparency, which is why I want to engage national federations and everyone interested in the future of table tennis.

"My website is an opportunity for me to communicate my plans and also gather vital feedback from people in the sport.

"I want to listen to the views of Table Tennis Federations, athletes and fans - the sport belongs to them."

Also featuring on the website, which is fully functional across mobile and desktop, are the latest news updates from Weikert’s campaign, as well his biographical information and contact details.

"My approach in this election campaign is to be consultative and engage in constructive dialogue, and I have met many table tennis leaders to discuss the future of the sport," he added.

"If I have the honour of being elected ITTF President, my leadership style will be true to these principles.

"One of my seven key pillars is to engage audiences digitally and attract younger fans to the ITTF, and that is why I believe that the launch of this website is so critical.

"Digital platforms are central to the ITTF’s development, and it is important to me that we engage with all audiences across all age groups.

"I want to embrace the use of digital in everything that I do, and help the ITTF develop as a consequence.

"I also care passionately about the global growth of table tennis so I am delighted to publish my manifesto in five languages on my website.

"We are already a global sport with a national federation in every nation so I want to make sure my vision for the sport reaches as many people as possible in their local language."

The 47-year-old former world number one also revealed he would soon be launching his implementation plans for the first 11 months of his Presidency should he succeed with his bid for the top job at the ITTF.

Belgium's Saive released his own manifesto back in January, which targeted making table tennis "one of the top sports in the world", as well as increasing the number of events on the Olympic programme.

He told insidethegames he is also hoping to "involve the member National Associations in all major decisions".

Saive and Weikert are joined by ITTF vice-president Khalil Al-Mohannadi of Qatar in a three-strong race.

insidethegames understands, however, that Al-Mohannadi is not a serious candidate and will eventually withdraw to back the likely winner.

The election is due to be held on May 31 during the 2017 ITTF World Championships in Düsseldorf.