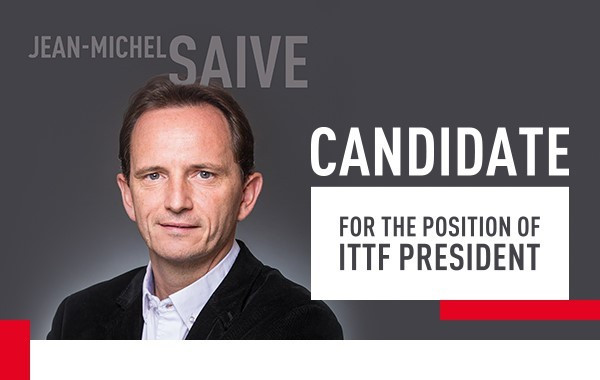 International Table Tennis Federation (ITTF) Presidential candidate Jean-Michel Saive claims he sees "similarities" to his own 11-point plan in incumbent Thomas Weikert's manifesto, while insisting he is the right man to take the governing body forward.

The 47-year-old former world number one also revealed he would soon be launching his implementation plans for the first 11 months of his Presidency should he succeed with his bid for the top job at the ITTF.

Belgium's Saive released his own manifesto back in January, which targeted making table tennis "one of the top sports in the world", as well as increasing the number of events on the Olympic programme.

He told insidethegames he is also hoping to "involve the member National Associations in all major decisions".

"I saw it [Weikert's manifesto] and I see in it some similarities to my 11-point plan that I sent out several weeks ago," Saive said.

"I distinguish myself from other candidates by basing my plan and programme on being 'athlete centered', in the same way the International Olympic Committee is trying to be also athlete centered.

"I also believe that the ITTF leadership must listen more to its own membership, the member National Associations, big or small.

"My intention is to always involve the member National Associations in all major decisions.

"I also intend to consult on a regular basis with the continental federation leaders to make sure that the different needs of each continent are met."

Saive and Weikert, ITTF President since September 2014, are joined by ITTF vice-president Khalil Al-Mohannadi of Qatar in a three-strong race.

insidethegames understands, however, that the Qatari is not a serious candidate and will eventually withdraw to back the likely winner.

The election is due to be held on May 31 during the 2017 ITTF World Championships in Düsseldorf.

"I believe that the ITTF needs new leadership based on practical experience and detailed knowledge of what the athletes need, and what the member national associations need," added Saive.

"I am unique in this election because I come from a medium-sized federation and I know what it takes to succeed.

"I also started low in the rankings as a player and made it to number one in the world.

"I know the route to success very well, I know it is hard, not easy, but possible even coming from a smaller nation.

"I will be announcing soon my implementation plans for the first 11 months of my Presidency, in which I will focus on 11 priorities.

"I believe in the practical implementation of plans in a concrete and systematic way."