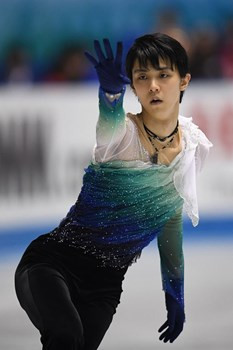 Hosts Japan maintained their lead on the second day of the International Skating Union (ISU) World Team Trophy at the Yoyogi National Stadium in Tokyo.

The United States moved up one position to second with a total of 78, while Russia slipped to third on 74.

Yuzuru Hanyu and Shoma Uno kept Japan in the top spot by finishing first and second in the men’s free skating.

Two-time and reigning world champion Hanyu put on a much stronger performance than in the short programme, skating to "Hope and Legacy" and pulling off a quad loop, quad salchow-triple toe, quad toe and quad toe-half loop-triple salchow combination to score 200.49 points.

Uno landed a quad loop and quad toe, but the first quad flip was shaky and he fell on the second attempt that was downgraded on his way to earning 198.49.

Sumire Suto and Francis Boudreau-Audet ranked sixth in the pairs short programme with 54.84, while Kana Muramoto and Chris Reed finished in the same position in the free dance with 92.68.

"I am amazed with how Yuzuru and Shoma did," Muramoto said.

"Our ladies Mai and Wakaba had a personal best score in the short programme and hopefully continue on with their good momentum.

"Mai and Wakaba are super young and really excited."

The US’s highest scoring members were Madison Chock and Evan Bates, who took second place in the free dance.

Their performance to "Under Pressure" by Queen and David Bowie secured them an impressive 109.96, with their only glitch coming when Bates stumbled briefly in a step sequence.

Russia had hoped for more, especially in the pairs, but Evgenia Tarasova and Vladimir Morozov could only manage a fourth-place finish in the short programme with 66.37 after the former missed the triple toe and the throw triple loop.

Mikhail Kolyada ranked fifth in the men’s free skating with a solid score of 184.04, while Maxim Kovtun placed 10th with 148.29.

Canada rose from fifth to fourth place today and now have 67.

Kaitlyn Weaver and Andrew Poje won the free dance with 113.83 and Patrick Chan came third in the men’s free skating with 190.74.

China are fifth on 59 with pair skaters Cheng Peng and Yang Jin adding 11 to the team score by finishing second in the short programme with 71.36.

France remain in sixth place, although Vanessa James and Morgan Cipres won the pairs short programme with a clean performance, registering a personal best of 75.72.

The fifth edition of the ISU World Team Trophy is due to continue tomorrow with the pairs and women’s free skating.