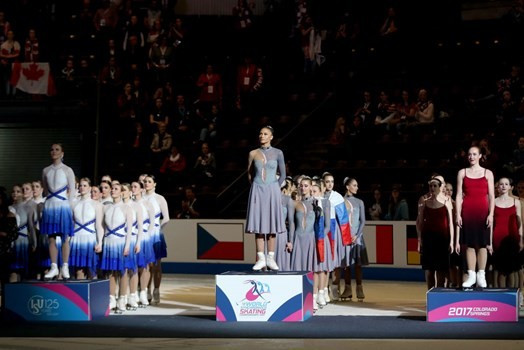 The team from Saint Petersburg added 136.08 points to their winning short programme score of 72.62 from yesterday, and finished in first place overall with 208.70.

Performing to "Warsaw Concerto" by Richard Addinsel, they picked up a level four for their no hold element, the travelling wheel and their pair spin.

The group lifts, the intersections and the move element were rated as level three.

Finland's Marigold Ice Unity won the free skating with 137.70 points, but ended up second overall with 208.58.

Skating to a selection of music by Finnish composer Jean Sibelius, the 2014 world champions were awarded level-four for their group lifts, no hold element, travelling wheel and pair element, as well as three level-three elements.

Canada's Team Nexxice, the 2015 world champions, ranked fourth in the free skating with 130.37 points and subsequently moved up to third overall with 197.54.

Finland's Team RCKT, the 2016 world silver medallists, dropped from third place to fifth overall with 193.87 points after a three-points deduction for falls in the intersection and another deduction for a costume failure.

A total of 24 teams representing 19 ISU members competed in the Championships.

The non-Olympic discipline first started up in the 1950s and was originally called precision skating.

It is considered to be a highly technical form of the sport with 16 skaters performing on the ice in a routine.