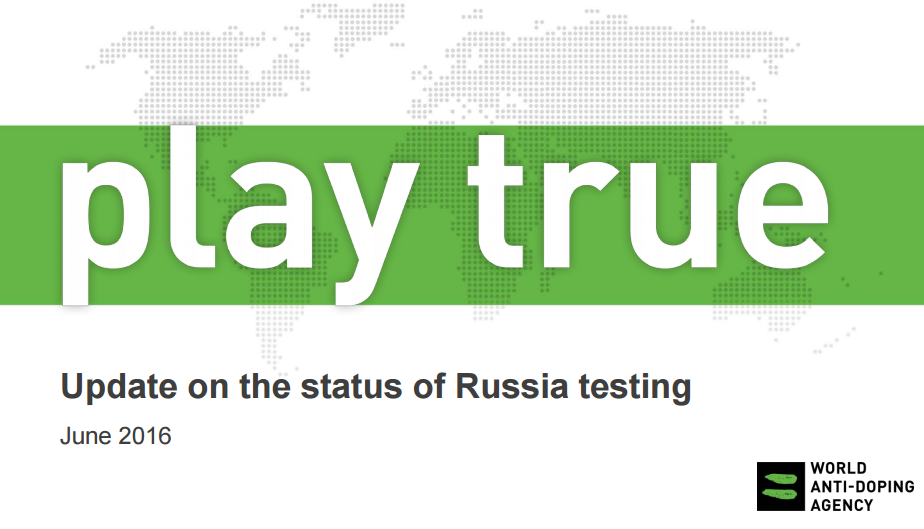 A damning report has been published today by the World Anti-Doping Agency (WADA) which has cast further doubt on whether Russia's ban should be lifted by the International Association of Athletics Federations (IAAF) in time for the country to compete at this year's Olympic Games in Rio de Janeiro.

The report, produced in partnership with UK Anti-Doping (UKAD), is intended to give an update from information provided on the status of the interim testing in Russia.

The information has already been shared with the IAAF Task Force, who are due to report to the world governing body's ruling Council here on Friday (June 17) ahead of a decision over whether to lift the suspension of the All-Russia Athletic Federation (ARAF) so they can participate at Rio 2016.

The report makes a mockery of Russia’s repeated claims to have made significant improvements.

Severe problems were raised with in and out-of-competition testing, with testers facing athletes running away rather than provide samples as well as the presence of intimidating FSB officials and - in one case - an athlete who tried to pay a bribe after a failed attempt at switching urine samples.

A total of 2,947 total tests were conducted on athletes across all sports between November 18 and May 29, of which 1,137 were in-competition tests and 1,810 out-of-competition.

UKAD, who are currently assisting the Russian Anti-Doping Agency, conducted 455 of the tests.

But 73 were not collected while 736 requested tests were declined or cancelled.

A total of 52  adverse analytical findings were recorded; 49 for meldonium, one for meldonium and tuaminohetane and one each for anabolic steroids stanozolol and nandrolone.

Problems with the whereabouts system for conducting surprise out-of-competition tests were highlighted throughout the report.

Military cities were often used as location of whereabouts, it was also pointed out, with athletes thought to be aware that special permission is needed to gain access to these sites.

They thus provided these locations even if they were not there in order to deter test planning, it is claimed.

Testers felt intimidated when accessing military cities and were faced with armed FSB agents threatening them with expulsion from the country.

They were therefore unable to gain access to some key Olympic qualification events, including National Weightlifting and National Greco-Roman Wrestling Championships.

In specific cases, two cyclists had not been seen at their whereabouts location for over a year, while one weightlifting athlete provided his one hour slot at a training centre 45 minutes away from his home and relied on staff to notify him when testers arrived.

For in-competition testing, there was found to be a lack of information available for competitions, with schedules not released until the day prior to or day of competition, meaning it was hard for testers to attend.

It was also challenging to find events "because at times only a region was provided for the location, not a specific venue or city".

One athletics athlete was observed running away from the notification area and mixed zone after competing and prior to the chaperone attempting notification.

Many athletes withdrew either before or during competition when doping control officers were present.

One athlete exited the stadium during her race and could not be located, while 15 competitors at the Russian National Walking Championship in Sochi either did not start, withdrew or were disqualified.

In the most extreme example of cheating recorded, an athletics athlete “used a container inserted inside her body - presumably containing clean urine - which leaked onto the floor and not into the collection vessel."

The unnamed athlete threw the container into a bin before this was retrieved by the tester, who she then attempted to bribe before providing a sample which subsequently returned a positive result.

This bears similarities with the claims of former Moscow Laboratory head Grigory Rodchenkov that fake urine samples swapped in a clandestine operation during the dead of night were used by up-to 15 medal winners at the 2014 Winter Olympics in Sochi.

A separate WADA investigation is still ongoing into these claims and is due to be completed by July 15.

The report can be read in full here here.