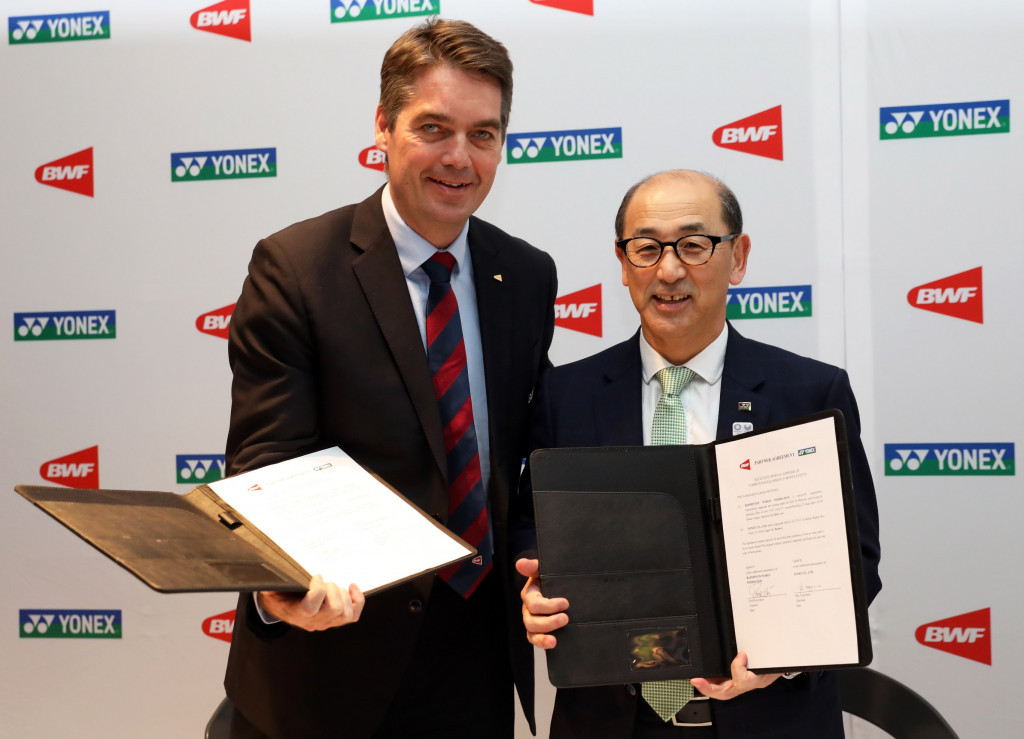 The Badminton World Federation (BWF) has signed up Yonex as the official equipment partner for its major events.

The five-year agreement is due to start at the upcoming BWF Sudirman Cup in Australian city Gold Coast, where action is set to take place from May 21 to 28.

It will also cover the BWF World Championships, scheduled to take place this year in Scottish city Glasgow from August 21 to 27, and the biennial BWF Thomas and Uber Cup Finals.

The deal, concluded by BWF's exclusive media and marketing partner Infront Sports & Media, was disclosed by BWF President Poul-Erik Høyer in a brief ceremony during Yonex All England Open Badminton Championships in Birmingham.

"Yonex has been a pioneer in the development of badminton equipment and continues to blaze the trail in innovation and technology," Høyer said.

"Its standards and reputation as the leading badminton brand are globally respected - and perhaps even envied.

"It is a brand that inspires confidence in those who use it and in those with whom it partners.

"I cannot say that we are welcoming Yonex to the badminton family, as they have long been a vital part of it, but I can certainly say we are very pleased to bring them even closer to us through this important partnership.

"We know that key elements of our flagship tournaments will be in safe hands with Yonex and we look forward to working with Yonex as we continue to build badminton globally."

Yonex chairman Ben Yoneyama thanked BWF for its vote of confidence in the Japanese manufacturer.

"Yonex is very thankful to have been chosen as the official equipment partner between 2017 and 2021," he said.

"We have worked hard to build our reputation at all levels of sport.

"Yonex equipment has been used in badminton for seven consecutive Summer Olympic Games, from Barcelona 1992 to the recent Rio 2016 Olympic Games.

"We are thrilled to be able to provide the same high-quality products and services for the BWF major events."

"While this partnership focuses on major events, we look forward to collaborating with BWF on a wider scale to help boost the development of badminton as we move towards the Tokyo 2020 Olympic and Paralympic Games," he added.

Yoneyama and Høyer participated in a signing ceremony after which the former presented a gift of shuttles to officials of BADMINTONscotland - hosts of the 2017 BWF World Championships - to mark the new partnership.

As an official sponsor, Yonex will offer on-site racket-stringing services to all players at BWF major events as well as provide court mats, shuttles and nets.

The company hopes to benefit from long-term activation and promotional opportunities through its association with badminton’s most prominent tournaments.

"Badminton has always been a core focus for us and we are delighted to be entering a new partnership with the BWF and, in particular, with the world’s most prestigious badminton titles," Yonex director Hiroaki Ebihara said.

"These events reflect greatly our own values and aspirations and we look forward to working closely with the BWF to further enrich the world through sports."

In September of last year, the BWF struck a deal with Infront Sports & Media, a subsidiary of Chinese company Wanda, for the media and sponsorship rights of its major events.

Infront Sports & Media executive director of summer sports, Stephan Herth, said the company was "delighted" to welcome Yonex as the first sponsor of their new BWF partnership and to "link them to a strong platform to reach their consumers and spread awareness of their high-quality products".