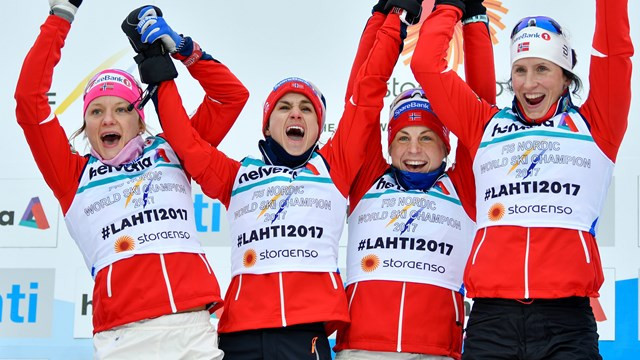 Norway claimed the women's 4x5 kilometres relay title by just over a minute at the 2017 International Ski Federation (FIS) Nordic Ski World Championships in the Finnish city of Lahti today.

Norway's 2017 sprint world champion Maiken Caspersen Falla was given the first leg and skied away to give her team a slight lead at the first exchange.

On the second leg Norway's lead was quickly eliminated after fast starts from Sweden's Charlotte Kalla and Finland's Kerttu Niskanen.

Niskanen then found herself at the front of the field after she began to increase the pace over the final few kilometres of the second leg.

Impressive skiing from Norway's Astrid Uhrenholdt Jacobsen then pushed Norway out of sight in the third, leaving just Sweden and Finland battling for the silver medal.

Despite her team's comfortable lead Norway's Marit Bjoergen recorded the fastest time of the race on the final leg, to secure the gold medal in a time of 52mins 21.5secs.

The race for silver came down to the final 300 metres with Stina Nilsson of Sweden overtaking Finland's Krista Parmakoski on the final downhill, to cross the line second in 53:23.1.

Parmakoski then crossed the line 0.5 seconds afterwards to clinch home bronze for Finland in 53:23.6.

"The biggest pressure was the one we put on ourselves," said Jacobsen.

"It is so hard to qualify for the relay team.

"We ski for our people and our country.

"We all desired to perform well."

The 23-year-old had already won the men's normal hill event in Lahti and took bronze in the mixed team normal hill competition.

Kraft won today with a total points score of 279.3, after two identical jumps of 127.5 metres.

Trailing behind in second place was Germany's Andreas Wellinger on 278.0 while Poland's Piotr Zyla completed the podium on 276.7.

Both minor medallists also recorded jumps of 127.5m with their first attempts and then went further than Kraft on their second go.

Wellinger lept 129m with Zyla producing a distance of 131m, but they were let down by the judges' scores.

Cross-country action in Lahti is due to continue tomorrow with the men's 4x10km relay and the men's team sprint events.