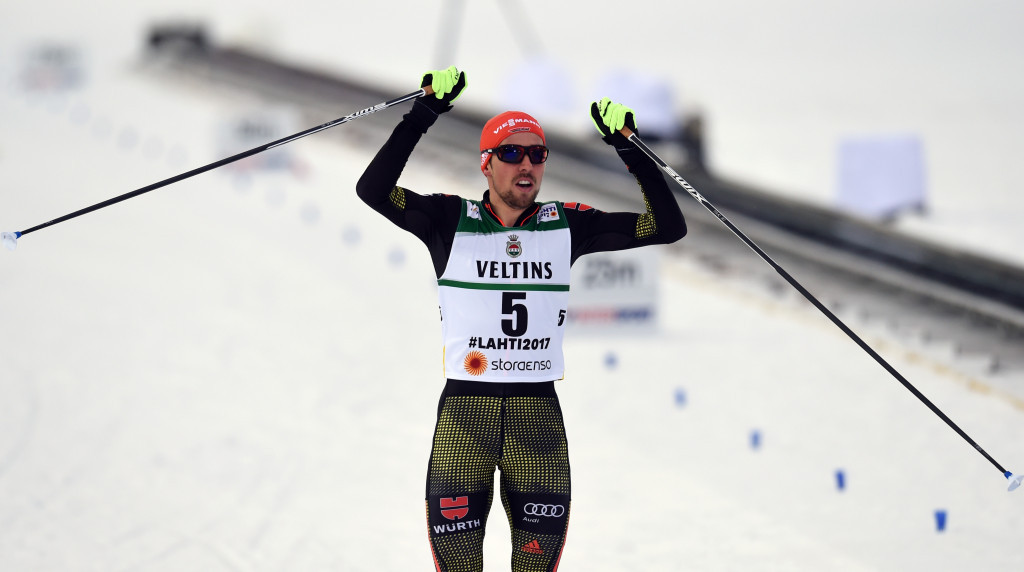 Rydzek clocked a time of 26min 41.6sec to finish 4.80 seconds ahead of Japan’s Akito Watabe, who secured his first World Championship medal with silver.

The bronze went the way of France’s Francois Braud, 13 seconds back.

Rydzek jumped 122 metres to put himself in fifth place at the intermediate stage, exactly one minute behind leader Mario Seidl of Austria with 132m.

Seidl skied alone at the head of the field for majority of the race but a pursuing group of four skiers formed quickly with Rydzek banding together with Watabe, Braud and Austria’s Wilhelm Denifl.

Working together, the quartet skied a well-paced race, shortening the distance to Seidl without overpacing.

Denifl was the first one to lose touch on the last lap, while Rydzek bypassed eventual fourth-place finisher Seidl on his way to going for gold.

The German attacked on the last uphill and, although Watabe tried to follow, the win never looked in doubt.

His other two successes at this year’s event came in the normal hill and team events.

In the men’s 15 kilometres cross-country classic, home favourite Iivo Niskanen came out on top with a time of 36:44.0.

Norway's Martin Johnsrud Sundby finished 17.90 seconds back to take his second silver medal of the Championships, while team-mate Niklas Dyrhaug was 31.30 seconds off the pace to claim bronze and his first individual World Championship medal.

"It is such an awesome feeling to win," Niskanen, a Sochi 2014 Olympic gold medallist in the team sprint, said.

"I was dreaming that one day I could sing national anthem in Lahti and the dream has come true.

"I think I am the happiest man on earth now."

Action in Lahti is due to continue tomorrow when the medallists in the women's 4x5km cross-country relay and the men's HS130 ski jumping will be decided.