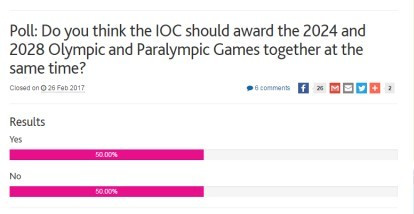 An insidethegames.biz poll has found that opinions are split on whether the International Olympic Committee (IOC) should award the 2024 and 2028 Olympic and Paralympic Games together later this year.

A poll which ran for seven days on the website asked the question: "Do you think the IOC should award the 2024 and 2028 Olympic and Paralympic Games together at the same time?"

The results showed that readers were split at 50 per cent on both yes and no.

Last week, Budapest's bid for the 2024 Games was withdrawn after a petition set up by campaign group Momentum Mozgalom calling for a referendum was signed by 266,151 people.

Budapest 2024 chairman Balázs Fürjes confirmed formal closure procedures had begun while the IOC released a statement saying they had received communication of the bid’s withdrawal.

That means Los Angeles and Paris are now the only two candidate cities remaining in the race for the 2024 Games, with a decision to be made during the IOC Session in Lima on September 13.

It has lead to speculation over whether the IOC may consider awarding both the 2024 and 2028 Games together.

Paris insisted earlier this month that there is no possibility of them hosting the 2028 Summer Olympic and Paralympic Games and that they are only interested in the 2024 edition.

Bid officials pointed out how they only have a tender for the proposed Athletes' Village site in the suburb of St Denis until 2024, so would have scrap this entire plan if they were to host the later edition.

In January, Los Angeles and the United States Olympic Committee (USOC) also warned that they have no interest in bidding for the 2028 Olympic and Paralympic Games if they are not awarded the 2024 edition.

Minutes from the USOC Board meeting on December 13 show it was agreed that they "do not foresee pursuing any bid" other than for 2024.

"Board discussion followed as to public reports that the IOC may consider naming hosts for both the 2024 and 2028 Games during 2017," the minutes said.

"After a full and frank exchange of ideas, issues, and possibilities, there was general agreement that the LA 2024 bid is specifically configured and calculated for 2024 rather than 2028 activation.

To vote on our latest poll on whether cities wanting to bid for the Olympics should hold a referendum with their residents before becoming a candidate, click here.