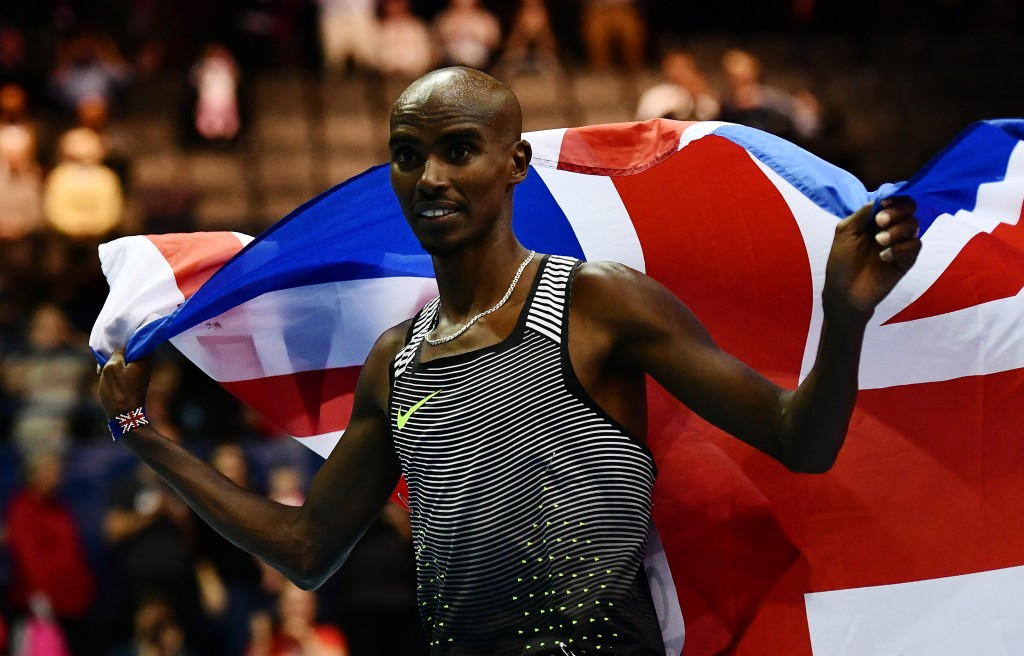 The 33-year-old won what is set to be the final indoor race of his career before retiring from the track later this year with a time of 13min 09.16sec.

Sir Mo took the lead with two laps to go and despite being pushed hard by Bahrain’s Albert Rop, he kicked on again with 200m remaining and held on until the finish.

Sir Mo, who plans to focus on road racing after the IAAF World Championships in London in August, said: "I can’t quite believe it is my last race but I have had a great indoor career.

"It is something that must come to an end.

"It is weird thinking about it and saying goodbye because I have had great support from everyone and in particular this track where I have broken so many records.

"It has been amazing over the years."

There was also British success today in the women’s 1,000m as Laura Muir triumphed with a European indoor record of 2:31.93.

The Scot’s time was 0.23 seconds quicker than that set by Russia’s Yuliya Chizhenko-Fomenko in 2006 and 0.80 faster than Kelly Holmes’ British indoor best.

"I am delighted," Muir, who has already broken the European 3,000m and British 5,000m indoor records this year, said.

"I really wanted to get the win; that was really important.

"To beat Kelly’s record is amazing and to be so close to the world record is also very encouraging for me.

"It is every athlete’s dream to be running well every time you come out on the track and being injury free.

"Hopefully I can carry this sort of form into the summer."

Among the other events held today was the women's 60m as Jamaica's 100m and 200m Olympic gold medallist Elaine Thompson eased to victory in 6.98sec, the eighth-quickest time ever.

It took 0.01 seconds off the stadium record set four years ago by Ivory Coast's Murielle Ahouré and moves her to second on the Jamaican all-time list behind Merlene Ottey and tied with Shelly-Ann Fraser-Pryce.

Thompson led a Jamaican one-two-three as compatriots Gayon Evans and Christania Williams finished second and third in 7.17 and 7.18 respectively.

World indoor champion Barbara Pierre was fourth in 7.20 and surrendered her lead in the World Indoor Tour standings to Evans.

Merritt's compatriot Casimir Loxsom crossed the line in the men’s 800m in a personal best of 1:46.13, one of two world-leading performances set by American middle-distance runners in Birmingham.

Kenya’s Bethwell Birgen was third, but it was enough to hold on to the World Indoor Tour win.

The 27-year-old clocked a time of 8:29.41 to break the national record she set in Karlsruhe and secure the World Indoor Tour win.

Sifan Hassan could take some consolation from a Dutch record of 8:30.76, while Ethiopia’s Dawit Seyaum was third in 8:37.65 in a race where 12 of the 14 women set personal bests.

Taplin had problems in working his way through the field and finished fourth in 46.38.

The equivalent women’s event, a non-scoring discipline in this year’s World Indoor Tour, was won by Great Britain’s world indoor bronze medallist Lorraine Ugen with a season’s best of 6.76m.

Switzerland’s Nichole Buchler secured a series win in the women’s pole vault, despite a minor thigh strain forcing her to withdraw in the latter stages of the competition.

Her 4.53m clearance was eventually good enough for second place and was beaten only by Greece’s Olympic champion Ekaterini Stefanidi, who posted 4.63m.