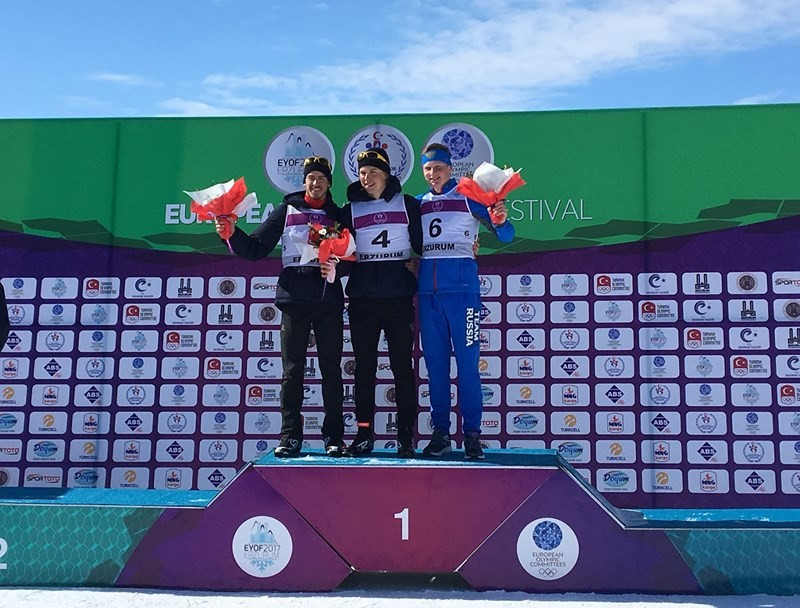 Briffaz finished fourth in the 7.5km sprint yesterday but improved on that performance to clinch gold 24 hours later.

The French athlete missed two shots but managed to complete the race with a time of 28min 45.9sec.

Jason Drezet, another Frenchman, followed Briffaz onto the podium and completed the race three seconds behind.

Andrei Viukhin of Russia completed the podium in 28:49.1.

In the second of today's biathlon competitions, the girls' 7.5km pursuit, Russia's Anna Grigoreva dominated the rest of the field.

She finished in a time of 24:45.8 to clinch first place, just over 37 seconds faster than her nearest rival.

Her compatriot, Anastasia Shevchenko, took second in 25:22.9 while Camille Bened rounded out the podium in a time of 26:21.8.

The 16-year-old completed the course in a time of 1:48.64 which narrowly handed her victory.

Rasskazova narrowly defeated her compatriot Sofya Boytsova in the girls' 1,500 metres final in 2:35.111.

There were two accidents in the final of the boys' 1,500m event which knocked four athletes down, but Murphy avoided all trouble to take first place in 2:24.536.

Konstantin Ivliev of Russia took second in 2:24.712 while Luca Spechenhauser of Italy completed the podium as he crossed the line in 2:24.956.

Russia's Alina Zagitova capitalised on her overnight lead from the short programme to take the gold medal in the girls' event.

She led by 8.52 points overnight but extended that advantage to 59.88 following today's free skating.

Zagitova finished on a total score of 187.06 while Ukrainian Anastasia Gozhva took second on 127.18.

Lucrezia Gennaro of Italy completed the podium with her total score of 125.53.

In the boys' competition, there was further Russian success as Petr Gumennik took top spot with an overall score of 195.21.

Italy's Daniel Grassl finished in second on 178.24 while Nika Egadze of Georgia took third on 155.18.

There was further French success in the boys' competition as Lucas Cornillat took first place in the big final.

He was followed by Glib Mostovenko of Ukraine in second while Russia's Daniil Donskikh completed the podium.

"The standard of this Village is worthy of a winter Olympic Games," said the Italian.

"I am deeply impressed with how our Turkish friends have been able to put everything in place to such high standards in such a short time.

"The Turkish National Olympic Committee, the Local Organising Committee and the Turkish Government have made every possible effort to ensure perfect competition conditions for the young athletes of Europe."