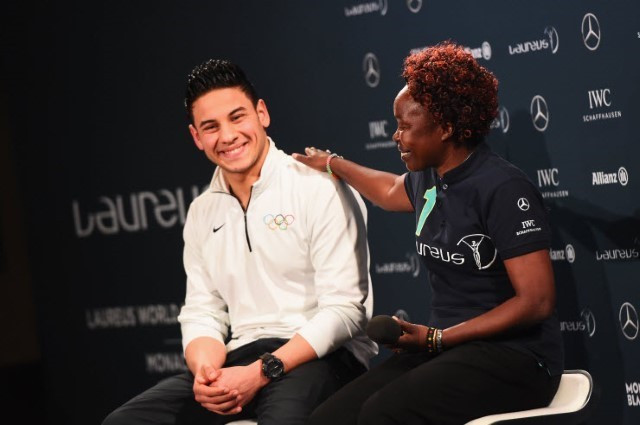 The Refugee Olympic Team have been presented with the Laureus Sport for Good Award for Sporting Inspiration in Monaco.

Nawal El Moutawakel, a Laureus Academy Member and the chair of the International Olympic Committee (IOC) Coordination Commission for the Rio 2016 Olympics, announced the team as the winners at a press conference, which took place ahead of the Laureus World Sports Awards later today.

"The Refugee Olympic Team was one of the sporting stories of 2016," she said.

"We talk about resilience and determination as being key attributes of successful athletes, this team has it in droves.

"They embody Nelson Mandela’s message that sport can instill hope where once there was only despair."

The 10-strong team that competed at Rio 2016 was led by Kenya’s former marathon world record holder Tegla Loroupe, who acted as their Chef de Mission for the Games.

Consisting of five South Sudanese, two Syrians, two from the Democratic Republic of Congo and one Ethiopian, the team were designed to act as "a symbol of hope for refugees worldwide", according to the IOC.

The Sudanese athletes were spotted during trials held by the Tegla Loroupe Peace Foundation in the Kakuma refugee camp in north-west Kenya.

Loroupe, who was United Nations Person of the Year in recognition of her role to get refugees to participate at Rio 2016, was accompanied by two members of the team in Monaco.

South Sudanese 800 metres runner Yiech Pur Biel and Syrian swimmer Rami Anis represented the team, with the pair set to join Loroupe on stage during the awards to receive the Lauerus statuette.

Loroupe thanked the IOC and the United Nations High Commissioner for Refugees (UNHCR) for their efforts to help create the team, which she claims sent a message around the world.

"This award is for the 65.4 million displaced people globally, who cannot go to their homes because of strife," she said.

"Each of the 10 inspirational people in our team have triumphed over adversity and endured unimaginable journeys to get to the start line.

"We were not in Rio to win medals; we were there with the help of the IOC and the UNHCR to use sport to send a message of hope and positivity to people around the world.

"More work needs to be done to solve the refugee crisis.

"We need to work together to make the world a more peaceful place for all people."

Britain’s Mo Farah and Andy Murray are nominated in the Sportsman of the Year category, alongside Usain Bolt, Cristiano Ronaldo and American basketball stars LeBron James and Stephen Curry.

Comeback of the Year, Team of the Year and the Sportsperson of the Year with a Disability Award are among the others honours which will also be given out.