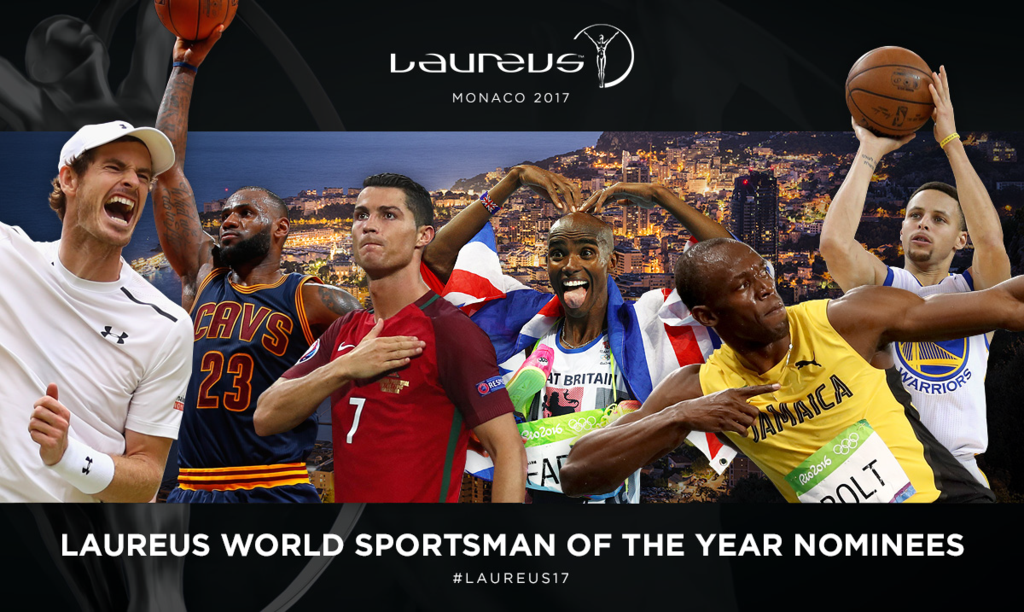 Newly-knighted Mo Farah and Andy Murray are among the nominees announced today for the 2017 Laureus World Sports Awards, competing in the Sportsman of the Year category against the likes of Usain Bolt and Cristiano Ronaldo.

The British pair have been nominated by the world’s media for the prestigious accolade and also face competition from American basketball stars LeBron James and Stephen Curry.

The eventual winner, as voted for by members of the Laureus World Sports Academy, is due to be revealed in Monaco on February 14.

Farah had an extremely successful year in 2016 which saw him defend his 10,000 and 5,000 metres Olympic gold medals in Rio de Janeiro.

This "double double" meant the 33-year-old became only the second man in the sport's history to achieve this feat, following in the footsteps of Finland’s Lasse Virén who completed it at the 1972 and 1976 Olympic Games in Munich and Montreal respectively.

"I’m delighted to be nominated for the Laureus Sportsman of the Year Award and would like to thank the media who voted for me," said Sir Mo.

"I dreamed of representing my country and winning just one Olympic medal when I was a young runner, so to achieve what I have has been an amazing journey.

"I believe you can realise any dream by being committed and working hard.

"That is what is so special about the Laureus Academy: you look at the names and you realise they have all been down a similar road.

"They have dreamed those dreams and achieved them."

Sir Andy, meanwhile, won his second Wimbledon men's singles crown in July, a month before he defended his Olympic title in Rio.

Last month, Sir Andy also set a record by winning the BBC Sports Personality of the Year award for a third time.

"The fact they are given by the Laureus Academy, which includes so many great sportsmen and women, makes them special.

"I’ve been lucky enough to win the Sportsman of the Year Award three times and I’m very pleased to be in with a chance to win another, so thanks to the media who voted for this nomination."

Football superstar Ronaldo, the winner of Euro 2016 with Portugal and the UEFA Champions League with Real Madrid, is also in the mix following a year which saw him receive the Ballon d'Or and the Best FIFA Football award.

Completing the six-strong category are James, who led Cleveland Cavaliers to the NBA Championship and was the Most Valuable Player (MVP) in the finals, and Curry, the first unanimous winner of the NBA season’s MVP award, representing Golden State Warriors.

American gymnast Simone Biles features among the half-dozen nominees for the Laureus World Sportswoman of the Year Award having won four Olympic gold medals and a bronze at Rio 2016, aged just 19.

Comptriot Allyson Felix, the most decorated female Olympian in track and field history with six gold and three silver medals in her career, has also been nominated along with world number one ranked tennis player Angelique Kerber of Germany, the winner of the Australian and US Open titles and Olympic silver in 2016.

American swimmer Katie Ledecky, winner of five Olympic medals at Rio 2016, including four golds, is also in the running along with Jamaican sprinter Elaine Thompson, the first woman to complete the 100m and 200m Olympic double since Florence Griffith Joyner at Seoul 1988, and British cyclist Laura Kenny, who became her country’s most successful female Olympian with two gold medals at Rio 2016.

Michael Phelps, the most successful Olympian ever, heads the nominees in the Laureus World Comeback of the Year category after the American won another five golds and a silver medal at Rio 2016.

After finishing second in 2014 and 2015, Germany’s Nico Rosberg finally won the Formula One World Championship last year and has earned a nomination for the Laureus World Breakthrough of the Year Award.

The Rio Paralympic Games in Rio de Janeiro provide all six nominees for the Laureus World Sportsperson of the Year with a Disability Award.

The men’s and women’s surfing world champions John John Florence of the US and Tyler Wright of Australia are nominated for the Laureus World Action Sportsperson of the Year Award, along with American snowboarder Chloe Kim, Brazilian skateboarder Pedro Barros, British mountain biker Rachel Atherton and Estonian freestyle skier Kelly Sildaru, who at the age of 13 became the youngest ever winner of a gold medal at the Winter X-Games.

"You always know in an Olympic year you are going to see a strong group of nominees and this year has certainly proved that," Laureus World Sports Academy chairman Sean Fitzpatrick said.

"What delights me is that we have an amazing mix of some of the greatest names in sport who have been performing at the highest level for as long as a decade, combined with some of the most exciting new faces we have seen for many years.

"It really is going to be an exceptional Laureus Awards next month."

For the first time ever, sports fans will also have the chance to make their voices heard in a brand new Best Sporting Moment of the Year Award, which will celebrate the power of sport.

While celebrating the greatest sporting successes of the year, the Laureus Awards Ceremony showcases the work of Laureus Sport for Good, which aims to use the power of sport to end violence, discrimination and disadvantage.