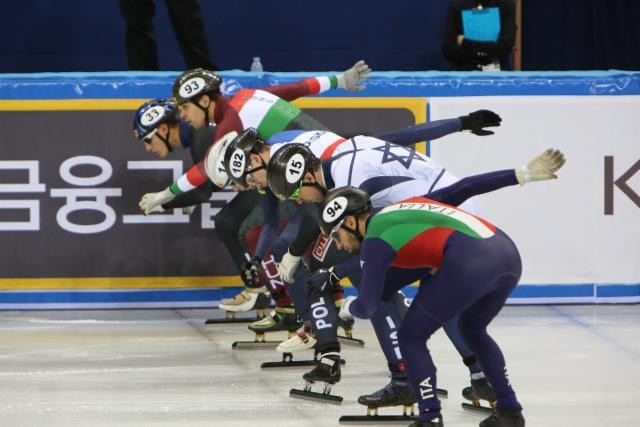 A large crowd got their first look inside the Gangneung Ice Arena as the Pyeongchang 2018 Winter Olympics venue hosted its first test event today.

The latest leg of the International Skating Union Short Track Speed Skating World Cup came to the 12,000 capacity stadium with the sport’s top performers taking to the ice.

It is the first of 23 test events being done at the venue before the Winter Olympics start on February 9.

Organisers of the Games said they were delighted with how the opening day went as 4,500 people came to watch the racing.

“It was wonderful to see such a big and enthusiastic crowd with us at the Gangneung Ice Arena today,” said Pyeongchang 2018 President and chief executive officer Lee Hee-beom.

“This three-day event is another chance for our staff to work with the federations and ensure we are on track to deliver a wonderful experience for the athletes, officials and all the spectators.”

In the opening day of action, Britain’s Elise Christie continued her fine form from last weekend in Shanghai as she clocked the quickest time of 1min 32.335secs while progressing through the women’s 1,000 metres heats to reach the quarter-finals.

However, there was a surprise in the men’s 1,000m as Wu Dajing, who won both 500m golds in Shanghai, was penalised in his first heat, halting his progress in the competition.

He did progress in the 500m race as he finished second in his heat behind Pascal Dion of Canada.

Reigning Olympic champion Victor Ahn of Russia also made it through the heats while Kazakhstan’s Abzal Azhgaliyev, currently second in the overall World Cup standings, won his heat.

Choi Min-jeong of Korea was the fastest in the women’s 500m as she won her heat and she will be joined in the next round by 2014 Olympic silver medallist Arianna Fontana of Italy.

The home crowd also had a lot to cheer in the men’s 1,500m heats as Korean skater and 2010 Winter Olympic gold medallist Lee Jung-su recorded the quickest time of 2:16.741.

In the ladies’ 1,500m, Canada’s Valerie Maltais topped the timesheets with 2:23.876 while three Korean skaters, Kim Ji-yoo, Shim Suk-him and Kim Geon-hee, all made it out of the heats successfully.

Also making it through the men’s relay were Hungary, Kazakhstan, Russia, China, Canada, The Netherlands and United States.

In the women’s relay, Hungary, China, The Netherlands, Japan, Italy, Canada and United States made it into the semi-finals.