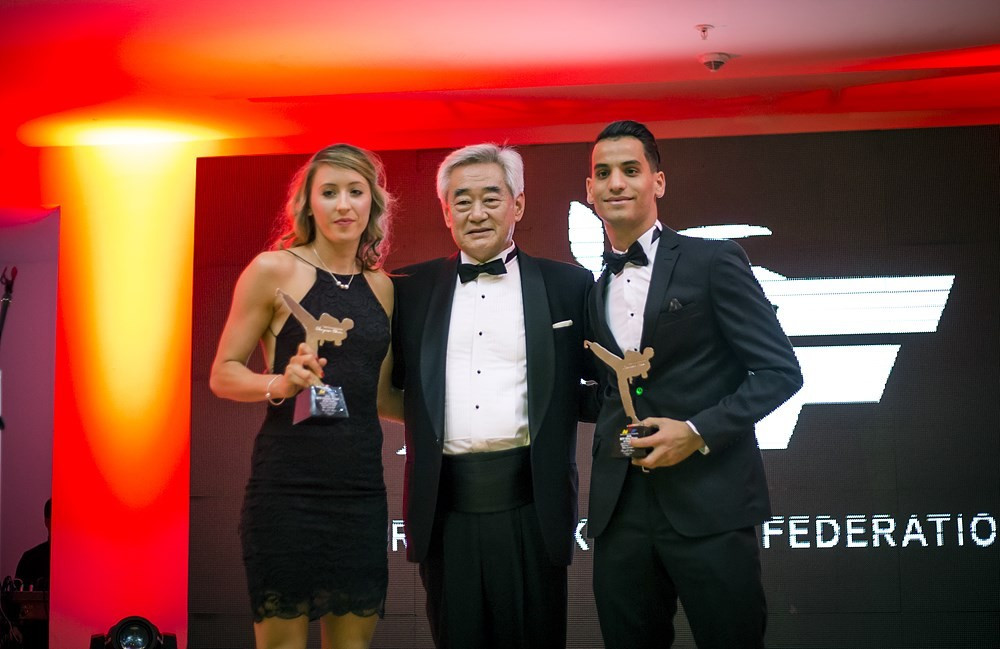 Jones won the female player of the year award after she claimed her second Olympic gold medal in Rio de Janeiro in August.

The 23-year-old then completed another near-perfect year by defeating Egypt's Hedaya Malak 7-0 to win the women's under-57 kilogram crown at the Grand Prix final in Baku.

"I would just like to thank everyone who supported me - the support is phenomenal," she said.

"We train so hard, we are constantly getting pushed and getting the best training.

The men's player of the year prize was awarded to Jordan’s Abughaush, who secured his country's first-ever Olympic medal in Rio when he claimed gold in the 68kg event.

He thanked WTF President Chungwon Choue and other members of the governing body.

"I am so proud to be here with you, with the referees, coaches and players," he said.

In an opening address, Choue congratulated the Azeri Minister of Youth and Sports Azad Rahimov, who attended the Gala Awards, on the country’s only gold medal at the Rio Olympics, won for Azerbaijan by taekwondo's Radik Isaev at over-80kg.

Choue also shared the news that Djibouti has joined the WTF as a full member, meaning the organisation now boasts 207 member national associations.

The South Korean then commented on amended rules and regulations which will be applied from next year.

"We will have a new taekwondo competition at the 2020 Tokyo Olympic Games," said Choue.

"I believe it will showcase taekwondo as the ‘best of the best’ combat sports in the world."

Heydarov thanked the WTF for holding its year-end events, the Grand Prix Final, the World Taekwondo Team Championships and the Gala Awards, in Baku.

Rahimov was also given a appreciation plaque.

"It is a high privilege to be here with you and we are proud to host this event," Rahimov said.

The women's referee of the year award went to Maria Merkouri of Georgia while Canadian Song-chul Kim took the men's trophy.

The Best Member National Association of the Year award was won by Azerbaijan.

Ivory Coast's Cheick Salleh Cissee claimed the prize for best kick of the year for his last-second jump spinning heel kick to the head of Great Britain’s Lutalo Mohammad, which won him a dramatic gold in the under-80kg category in Rio.

Azerbaijan's Reza Mehmandoust won the coach of the year award.

Belgium, South Korea, Russia and the United States are set to battle for the inaugural mixed title at the event held at the Sarhadchi Olympic Sports Complex.

Previously, only male and female team events have been held, with each country fielding five athletes with the option of a substitute.