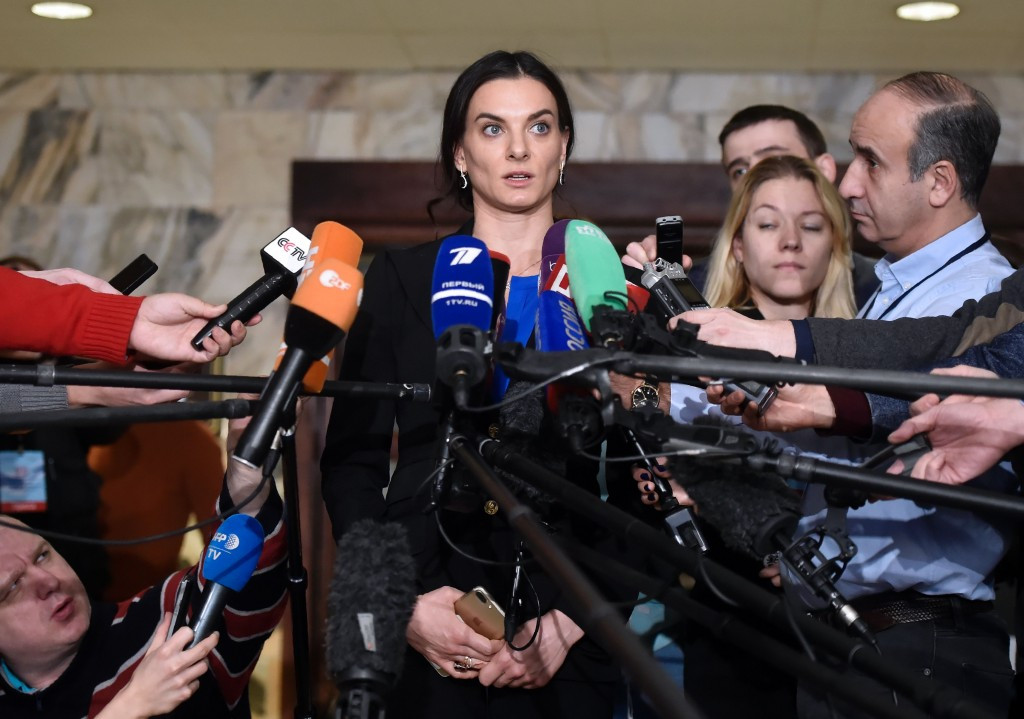 Yelena Isinbayeva has called for "a line to be drawn" under allegations that Russia operated a state-sponsored doping scheme and called for it be re-admitted back to competition by the International Association of Athletics Federations (IAAF).

The double Olympic pole vault champion was last week appointed chair of the Russian Anti-Doping Agency (RUSADA) and has vowed to restore confidence in her country following the publication on Friday (December 9) of the damning McLaren Report.

One of her immediate targets will be trying to help persuade the IAAF to reinstate Russia into international competition in time for the 2017 World Championships in London.

He found evidence to support allegations made by German television broadcaster ARD that the Government was involved in helping athletes dope.

Pound also confirmed that Russian athletes paid bribes to the IAAF to to help cover-up positive drugs tests and avoid being banned.

The IAAF's subsequent suspension ruled Russia out of the Olympic Games in Rio de Janeiro in August.

An IAAF Taskforce, led by Norwegian Rune Andersen, is due to visit the Russian capital again next month to review whether the ban should be lifted.

"I want to believe soon they will find a compromise," Isinbayeva told insidethegames here.

"We have done everything they asked - we did it even before Rio 2016.

"I hope soon that we can compete internationally otherwise we will have no chance to develop the sport in Russia, we lose visibility otherwise.

"We must find a solution as the worst thing has happened already - we missed the Olympic Games.

"Russia must be allowed back.

"A line needs to be drawn under the situation, otherwise it could go on for years."

Isinbayeva announced her retirement during Rio 2016 and, at the age of 34, has now launched a new career in sports administration.

She was elected as a member of the International Olympic Committee Athletes' Commission during Rio 2016 and has also been appointed to the Executive Board of the Russian Olympic Committee, as well as being put in charge of RUSADA.

"I want to show that Russian athletes are clean and that we are open to the world," Isinbayeva, who also won three World Championship gold medals and set 28 world records, told insidethegames.

"Many athletes can see what happened before Rio 2016 [Russia being banned] was not fair on clean and honest athletes.

"I still have regrets I didn't have the chance to win a third [Olympic] gold medal.

"But I have more regret that young Russian athletes who had trained hard and sacrificed a lot had their dreams stolen because of the mistakes of others.

"It's a big gap between Olympic Games, four years is a long time.

"I have done everything so I can't have too many regrets.

"Everyone knows I'm honest and clean.

"I don't think it put a shadow over my career.

"The athletes voted me as a member of the IOC [at Rio 2016] so it proved that they believed me."

Isinbayeva withdrew from standing to become the new President of the Russian Athletic Federation at the election here on Friday (December 9) following her appointment as head of RUSADA.

It is expected, though, she will remain closely involved with athletics.

Re-establishing a previously close relationship with IAAF President Sebastian Coe will be among her aims.

Isinbayeva claimed not to have spoken to him since his election to replace Lamine Diack at the head of the world governing body.

"I feel a little bit sad because before we had a good relationship," she told insidethegames.

"I supported him a lot during his Presidential campaign.

"I spent two days with him in my home city in Volgograd."