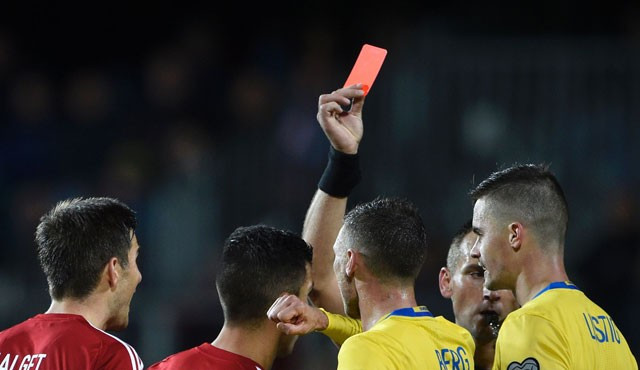 Cricket umpires could be given the power to send players off the field after the sport’s law makers recommended introducing a red card system at all levels of the sport.

The Marylebone Cricket Club’s (MCC) World Cricket Committee has also called on bat sizes to be restricted, claiming the "balance of the game has tilted too far in the batsman's favour".

Plans had been revealed earlier this year to establish football-style yellow and red card punishments in the sport and the Committee feel it is a necessary step to curb violent incidents, which occur rarely in the international game but often plague lower-level cricket.

Under the change to the law, players could be ejected from the field for serious disciplinary breaches, such as threatening an umpire, physically assaulting another player, umpire, official or spectator or any other act of violence.

Other potential sanctions, including sin-bins and run penalties for lesser offences, were also discussed by the Committee.

The recommendations, made at a two-day meeting in Mumbai, are subject to ratification from the MCC’s main committee.

They could come into the laws of the game as early as October 1, 2017.

“This is a pretty drastic change to the laws," said Committee chairman and ex-England captain Mike Brearley.

"Evidence from people familiar with leagues in certain parts of England says behaviour has got a lot worse.

"Umpires have to be respected and given the best possible chance.

"Cricket is the only game apart from Australian Rules Football in which there isn’t this possibility of an in match deterrent.

"I think you call it [cricket] a game that you play hard and play fair.

"The Spirit of Cricket is represented by that phrase in my mind.

"That does not include hitting someone over the back of the head with a bat or punching them.

"This is for use in extreme cases."

Former Australia captain Ricky Ponting believes it had "got to the state where something had to happen to prevent those things happening on the international stage".

"The modern player now understands their role in society, about being role models and want to play the game the right way for younger kids," the Australian added.

The Committee has also recommended bat edges be reduced to a maximum allowance of 40 millimetres and bat depths must not exceed 67mm.

Many of the top players' bats have edges of between 38mm and 42mm, but there are some which have edges of up to 50mm, which was felt to be excessive and in need of restriction," the Committee concluded.