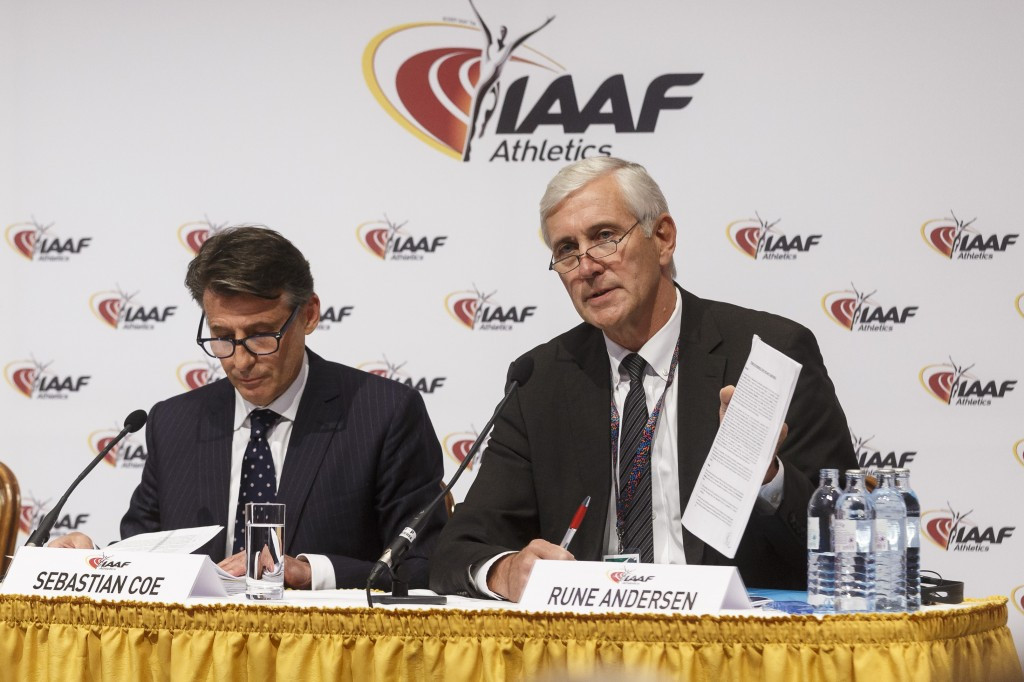 Russia’s suspended track and field athletes look increasingly likely to remain out in the cold during next summer’s International Association of Athletics Federations (IAAF) World Championships in London, according to new details from the world governing body's Taskforce’s latest report.

In maintaining the current suspension at least until next February, the IAAF Taskforce head Rune Andersen told Council on Thursday (December 1) that there could be no change until the Russian Anti-Doping Agency (RUSADA), currently suspended by the World Anti-Doping Agency (WADA), had been reinstated.

"Discussions are ongoing between WADA and the Russian authorities on a roadmap for RUSADA to begin operations again as a fully compliant NADO hopefully before the end of 2017," he said.

That timeline does not chime in with the statements made from the Russian side shortly before Andersen announced the "key remaining issue" - that Russia has yet to provide convincing evidence that anti-doping procedures within its borders can be conducted effectively and without interference.

The Russian news agency TASS reported Deputy Minister for Sport, Vitaly Mutko, as saying: "I hope that the All-Russia Athletics Federation (ARAF) will be reinstated by the start of the spring season."

ARAF has since been re-named the Russian Athletics Federation (RusAF).

The silver lining for individual Russian athletes would appear to be a broadening pathway to major competition which lies open via the IAAF’s International Registered Testing Pool (IRTP), set up in March, according to documents presented by Andersen to the IAAF Council and obtained by insidethegames.

An amendment to the report reads: "The IAAF will include certain Russian athletes (likely to be c.50 athletes) in its International Registered Testing Pool…it shall be the responsibility of RusAF to assist the IAAF in obtaining the required whereabouts information from the Russian athletes in the IRTP."

RusAF also has responsibility for "ensuring that such testing can be conducted without any hindrance, delay, obstruction or interference".

In order to be eligible for an international event, athletes will have to have been in the Testing Pool "for at least six months immediately preceding the event" and to have "undergone at least three no notice out-of-competition tests and (if he or she competes in a middle distance, long distance, combined events, or race walk discipline) at least three Athlete Biological Passport tests (blood and urine), all of which must have been conducted in strict compliance with all applicable International Standards."

Andersen told a press conference on Thursday that the IAAF Taskforce would visit Moscow in January to assess the reaction to the findings of the final report by Richard McLaren on behalf of the World Anti-Doping Agency that is due to be released in London on Friday (December 9).

"It will report again on progress at the Council’s next meeting, in February 2017, when it hopes to be able to identify a clear roadmap and timetable for RusAF’s reinstatement," he said.

Andersen reminded the IAAF Council of the three reinstatement conditions for Russia:

Andersen went on to say that: "under the very professional leadership of its President, Mr Dimitri Shlyakhtin, RusAF has made further progress towards satisfying the outstanding Verification Criteria."

Andersen noted that "the Russian Parliament has passed a law that makes it a criminal offence for coaches and other support persons to supply prohibited substances to athletes".

The Taskforce also asked the Council to approve changes and additions to the Verification Criteria already established.

Additions included a requirement for RusAF to demonstrate that "the cooperation between sports bodies and public authorities that is critical to the fight against doping in sport exists in Russia, including (without limitation) by securing the full support of the Russian public authorities for the French criminal investigation into corrupt practices involving former ARAF officials and former IAAF officials."

There was also a new amendment that "RusAF must reimburse the IAAF" for all past and future costs incurred by the IAAF Taskforce as it seeks to assess compliance with the WADA Code.

Among previous Verification Criteria was a requirement that ARAF "must sever any ties it has" with Dr Sergey Nikolaevich Portugalov, reportedly formerly chief of its Medical Commission.

The Taskforce has demanded from the RusAF a list of all those who have been supplied or counselled by Portugalov, walks coach Viktor Chegin or Aleksey Melnikov.