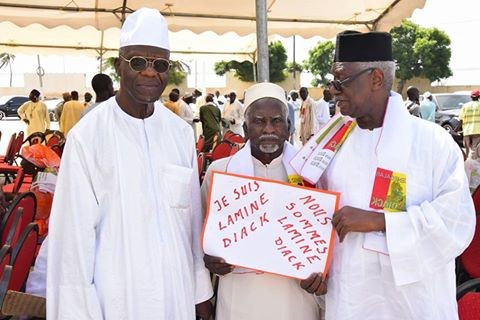 A campaign has been launched in Senegal calling for the release of former International Association of Athletics Federations (IAAF) President Lamine Diack from house arrest in France.

It comes as the Court of Arbitration for Sport announced that hearings against three officials handed life bans by the IAAF this year - including his son Papa Massata - are scheduled for between November 14 and 17 this month.

Diack, who served as IAAF head from 1999 until being replaced by Sebastian Coe last August, was charged for corruption and aggravated money laundering as part of a French investigation a year ago tomorrow on November 4, 2015.

The 83-year-old has since been held under house arrest in Paris as an investigation continues.

A #JeSuisDiack campaign has been launched on social media in a bid to show support along with a "Bring Back Lamine Diack" Facebook group, accessible here.

According to the Dakar Midi newspaper, an event at a local mosque was organised by his family and was attended by "hundreds of people".

Those present reportedly included the Mayors of both Dakar and Medina, two members of the Socialist Party of which Diack was a former member.

It is unlikely the campaign will gain much support in the sports world, however, given how Diack has been largely ostracised in recent months as allegations have mounted against him.

This included him resigning as an honorary member of the International Olympic Committee.

Diack is alleged to have been at the centre of a cabal of IAAF officials who accepted bribes in return for the covering up of failed drugs tests.

Papa Massata Diack was banned for life from athletics in January by the IAAF’s Ethics Commission, which concluded that figures within the organisation had been "guilty of blackmail" since 2011.

The trio are all scheduled to appear before CAS in separate hearings to be conducted between November 14 and 17, it was announced today.

Lamine Diack is also implicated in a probe into a $2 million (£1.3 million/€1.7 million) "consultancy fee" paid by the Tokyo 2020 bid team to Singapore-based Black Tidings before they were successfully awarded the Olympics in 2013.

It is thus alleged that the money was in fact a bribe in return for support from the Diacks, with Lamine then a voting member of the IOC.

A Japanese Olympic Committee investigation has "cleared" Tokyo of any wrongdoing, but the allegations are still being investigated in France.