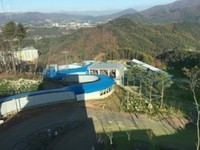 A total of 51 athletes from the two disciplines travelled to conduct testing at the Alpensia Sliding Center from October 24 until today.

Delegations from the IBSF and FIL visited the venue in March but they could not carry out proper tests as there was not enough ice on the upper section of the course.

It forced the IBSF and the FIL to undertake a second attempt at testing but the venue has been praised by the governing bodies.

The test runs came as part of the homologation process, coordinated by Pyeongchang 2018, the two relevant International Federations (IFs) and the International Olympic Committee (IOC).

The procedure also includes "an assessment of the field of play technical specifications, venue management structure, infrastructure and operational aspects".

"I want to thank everybody for the cooperation and hard work done in the past months," IBSF President Ivo Ferriani said.

"We were able to successfully execute the test runs as part of the homologation process.

"My special thanks goes to the athletes and coaches who were willing to interrupt their season preparation and do the test runs in the common interest of our sports."

Ferriani, the Italian who became a member of the IOC during its Session before the Olympic Games in Rio de Janeiro, had expressed concerns over outstanding safety issues during last month’s Coordination Commission inspection visit.

It followed the publishing this week of a report, written following initial "stress" testing in August, in which various problems with the venue were identified.

Pyeongchang 2018 claimed they had already discussed all the latest issues with the two International Federations and had agreed on what work is required.

Official training weeks are scheduled to be held at the Alpensia Sliding Centre’s track, standing at exactly 2,018 metres long, in February and March of next year.

An IBSF World Cup is then due to be staged there from March 17 to 19, with action due to take place in both bobsleigh and skeleton events.