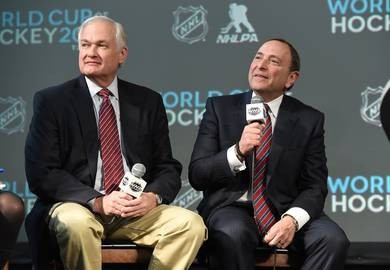 A 10-day festival will take place next month to try to increase awareness of ice hockey to children, ahead of the World Cup of Hockey taking place in Toronto.

National Hockey League Commissioner Gary Bettman was joined by their Players' Association executive director Donald Fehr in unveiling further initiatives due to take place throughout the duration of the tournament.

The festival is scheduled to begin on September 16 at Distillery District in downtown Toronto, with competition set to take place the following day.

A Hockey House will be the centre of the festivities, while daily concerts are also scheduled to take place.

It is hoped that the initiatives will build the awareness of ice hockey to people who come from other countries, with a less well established hockey tradition to Canada.

Town hall discussions and educational programmes will take place in an effort to celebrate the game and raise the public’s understanding.

The third edition of the tournament is due to take place 12-years after the second, with a key change seeing an eight-team event, rather than having eight nations.

The tournament, last won by Canada in 2004, will also feature the United States, Russia, Sweden, Finland, and the Czech Republic.

A North American team, featuring players aged 23 and under, will appear in the tournament as well as a squad which includes the best players from Europe.

It has been claimed that the tournament will not affect the players participation at the Olympic Games, despite the majority of the world’s most recognisable names due to compete in the World Cup of Hockey.

"Nobody’s trying to replace the Olympics or the players’ participation there," said Fehr.

"This is an attempt to create a hockey-only international event that will generate an enormous following and make a significant statement which is good for hockey all over the world.

"That’s why we’re working with the federations and will continue to do so in the future.

"There’s no reason why this would have an impact on the Olympics at all.

"I always felt confident but I’m more confident than I ever was in the format.

"This is not the World Championship or the Olympics, but when people looked at the teams and the number of different countries represented and the unique storylines of a young team that will be lightning fast, I think it’s going to create a very interesting set of circumstances”.

Competition is due to take place from September 17 to October 1, with action due to be held at the Air Canada Centre.