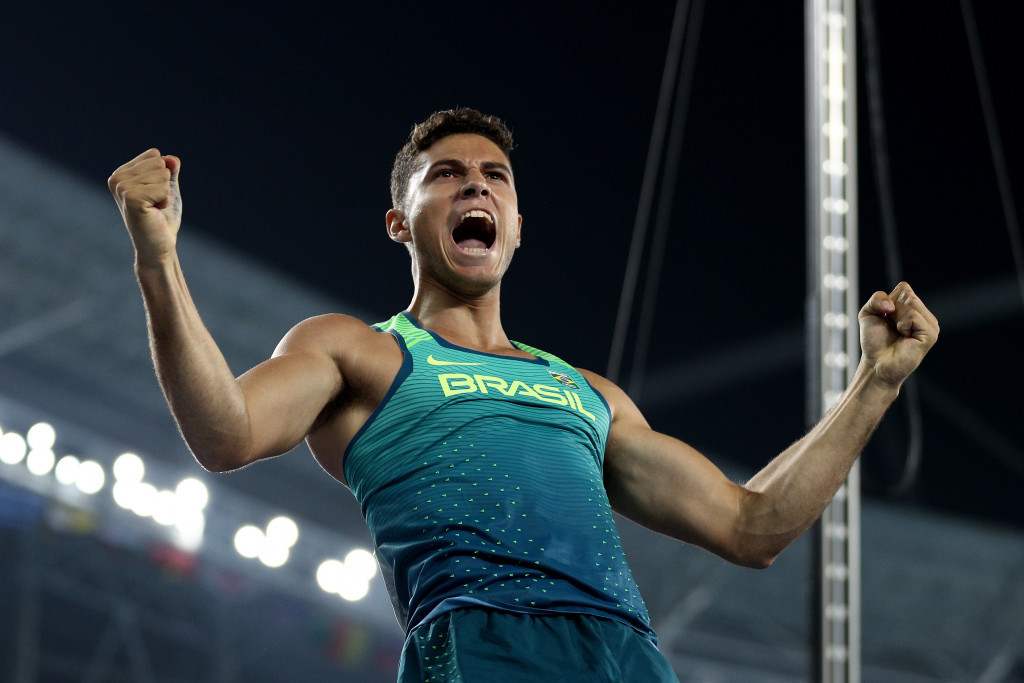 Heavy rain delayed fourth day of evening athletics session here – but it was worth the wait as it provided the host nation, and a delirious home crowd, with one of the great Olympic shock victories as 22-year-old pole vaulter Thiago Da Silva set an Olympic Games record of 6.03 metres to defeat the defending champion and world record holder Renaud Lavillenie and secure a second gold medal for Brazil at Rio 2016.

There was a shock too in the women’s 400 metres where another 22-year-old, Shaunae Miller of the Bahamas, dived exhausted over the finish line to beat world champion Allyson Felix of the United States, who was seeking to become the first woman in athletics to win five Olympic gold medals.

There were no surprises in the men’s 800m final, however, as David Rudisha of Kenya successfully defended the title he had won at London 2012 as he broke clear at the bell and crossed in 1min 42.15sec.

In a competition that had started late – and then been interrupted at least one more time – by the weather, Da Silva installed himself in Brazil’s sporting history with an audacious gamble that paid off in golden fashion.

Lavillenie did not enter the competition until 5.75m, by which point several of his key opponents had made their exit on a difficult night for vaulting, including Canada’s 22-year-old world champion Shawnacy Barber, who could not go beyond 5.50m.

The Frenchman made four immaculate first-time clearances at 5.75m, 5.85m, 5.93m and 5.98m, by which time only the Brazilian was still in contention, although the latter carried with him two fouls recorded at 5.75m and 5.93m - the latter height matching his South American record of last year.

The crowd was loud in its appreciation of a silver at least for Da Silva, cheering as Sam Kendricks of the United States had to settle for bronze after a third failure at 5.93m.

The Brazilian was only going to go one better if he vaulted higher than Lavillenie, whose perfect record would defeat anyone on countback.

It was a huge ask for the Brazilian - 10 centimetres above his personal best.

But it was a challenge too for Lavillenie, who was hoping to become the only male vaulter to retain an Olympic title other than Bob Richards of the United States, the winner at Helsinki 1952 and Melbourne 1956.

His world record of 6.16m was set indoors, and his outdoor best, set last year, was a relatively modest 6.05m.

It was man against man in the now more than half empty stadium.

Lavillenie and Da Silva each had a failure. Lavillenie’s second effort, which left the bear shuddering before it decided to drop, drew a huge “Oooohhh”, even from this partisan crowd.

Next came Da Silva’s second attempt – and there was pandemonium as he cleared it.

After the celebrations had died down Lavillenie, his face drawn, had one final attempt to retrieve the gold that had seemed destined for him for so long - but he failed at 6.08m and Brazil began celebrating a historic athletic feat.

Felix had intended to seek a 200/400m double here, but when – after a season undermined by an ankle injury suffered in April - she failed to qualify for the shorter distance at which she won in London 2012, all her energies were focused on the single lap.

As the field neared the line it seemed as if she had timed her run perfectly to claim gold by overhauling the flagging leader in lane seven, Miller.

The silver medallist behind Felix’s gold at last year’s International Association of Athletics Federations World Championships in Beijing, had gambled in the manner of De Silva by going out hard and carrying a five metres lead into the home straight.

Bronze medal in the women's 400m was claimed by Jamaica's Shericka Jackson in 49.85 ahead of fellow countrywoman Natasha Hastings.

Miller, who lay on the ground a long time after her dive, explained afterwards that she had heard the result from her mum shouting from the stands.

“I heard her scream and she was like, 'Yeah, yeah, yeah.'

Rudisha’s 1:43.35 clocking in Hungary last month has established him as favourite to retain the title he had won in the world record time of 1:40.91 at London 2012.

Kipketer went out very fast, but his five metres lead was trimmed back down again as he was caught by the pack at the bell, which was the signal for the taller and more powerful Rudisha to motor away at the front.

He pushed on down the back straight and around the final bend, entering the finishing straight with a five metres lead which he maintained to the line, crossing in 1:42.15.

Silver went to Taoufik Makhloufi, Algeria's London 2012 1500m champion, in a national record of 1:42.61, with bronze being claimed by Clayton Murphy of the United States in a personal best of 1:42.93, just ahead of France's Pierre Ambroise Bosse.