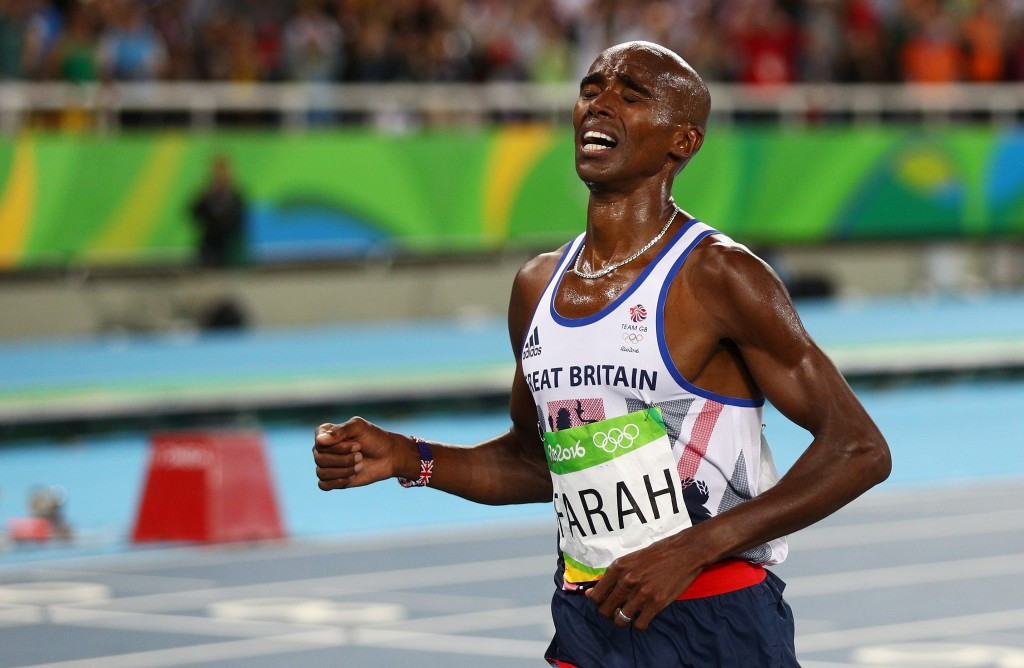 British hopes for a re-run of "Super Saturday" from London 2012 fell short here tonight, but gold for Mo Farah in the 10,000 metres, silver for Jessica Ennis-Hill in the heptathlon and bronze for Greg Rutherford in the long jump surely constituted a "Satisfactory Saturday" at the least.

Ennis-Hill had to give best in the end to an inspired second day’s performance by Belgium’s 21-year-old Nafi Thiam, while Rutherford gained tangible reward from a dramatically fluctuating contest with a last effort of 8.29 metres after Jeff Henderson of the United States had claimed gold by one centimetre from South Africa’s Luvo Manyonga with a last effort of 8.38m.

The other gold of the night, in the women’s 100m, went to Jamaica’s Elaine Thompson, who came home in 10.71sec in a race where her Jamaican compatriot Shelly-Ann Fraser-Pryce, seeking a hat-trick of Olympic titles, had to settle for the bronze medal.

Farah’s achievement in defending the title he won in London four years ago was all the more remarkable for the fact that he had to clamber to his feet halfway through the race after being accidently tripped by his training partner Galen Rupp, who was representing the United States.

There were echoes here of Lasse Viren’s fall and rise to 10,000m victory at Munich 1972, where the Finn was tripped at almost the same stage of the race as the 33-year-old Briton.

Farah, who will now seek to defend his 5,000m title, has been unbeaten in global finals since Ethiopia’s Ibrahim Jeilan caught him napping just before the line in the 10,000m at the International Association of Athletics Federations’ 2011 World Championships in Daegu.

Time and again his opponents have tried all means to thwart him, and here we saw Kenya’s runners pushing on the early pace in an attempt to run some of the snap of out of man who is the British record holder over 1500m with a time of 3min 28.81sec.

Paul Tanui and world half marathon champion Geoffrey Kamworor did much of the work in trying to draw Farah’s sting.

Having run insouciantly at the back of the pack in the early laps, Farah moved up to track the leaders, recovering from his fall as Rupp briefly performed the function of a domestique, and as the bell rang he was up at the front alongside Tanui.

The young Kenyan went for it, pushing on down the back straight, but Farah tracked him and as they entered the home straight he opened up for the killing final sprint which has become as inevitable a sight as Usain Bolt’s down the same stretches of track in recent years.

“That was really emotional,” said Farah after making his familiar Mobot sign in crossing the line.

“You know with some things, you can’t control them in a race.

“When I went down I hoped it didn’t take it out of me but I thought about how much I’d worked for this race and didn’t let it go.

"When you go down, it’s really emotional - you pick yourself up and you work it through.

“When I crossed the line, I got really emotional because you work so hard for it and it can be gone.

"That’s what I’m definitely emotional about.

“I work hard and spend a lot of time away from my family and that can be gone, and I just had to tell myself to get through it."

Ennis-Hill had earned the overnight lead in the heptathlon, and while Thiam passed her thanks to a prodigious long jump of 6.58m that earned 1,033 points, the 30-year-old Briton’s own long jump of 6.34m earned a healthy 956 points that kept her just five points adrift with all to play for.

Ennis-Hill used all her experience to record a solid javelin throw of 46.06m, but Thiam threw a huge personal best of 53.13m to put all the pressure on the Briton in the last event.

The defending champion gave it everything over the final two gruelling laps, leading from gun to tape and crossing in 2:09.07 to claim 978 points.

But again Thiam raised her game, collapsing over the line in a personal best of 2:16.54 which gave her gold by a margin of 235 points with a national record of 6,810.

Canada's Brianne Theisen Eaton, cheered on by American husband Ashton Eaton, who will defend his decathlon title here, produced a strong finish to claim the bronze medal with 6,653 points.

The chances of Britain’s 23-year-old Katarina Johnson-Thompson, third overnight, effectively disappeared with a javelin throw of 36.36m which earned her only 598 points.

Ennis-Hill was tearful in the mixed zone, and said: "I think it's just a mix of everything and thinking back over the past few years, and I'm just so emotional.

“I've got to make a decision whether this is my last heptathlon or not, but yeah I'm so proud of what I've achieved over the past few years.

"It's a tough decision but we will see.

“It makes it a harder decision knowing the World Championships are in London next year.

"I knew I had to beat her by about 10 seconds, and when I found that out after coming off from the javelin, I just thought, ‘Oh God, that's so much', so I just thought, I'm going to run hard like I always do in the 800m.

Thiam, who suffered an elbow injury in the run-up to the Games, commented: "It's crazy.

"I wasn't expecting that - maybe top eight, but not the gold.

“It was very hard coming back from being injured - I wasn't sure if I would even make these Games.

“But with the physio we did a lot of work and it worked."

There was high emotion all over the arena on a night when the long jump contest fluctuated dramatically.

The first round saw Henderson, fellow US jumper Jarrion Lawson and Rutherford in gold, silver and bronze positions with 8.20m, 8.19m and 8.18m.

Rutherford regained the lead briefly with a third round of 8.22m, but was swiftly passed by Lawson’s 8.25m.

The fourth round saw Luvo Manyonga of South Africa snatch the lead with 8.37m, only for Henderson to surpass him in the last round.

Rutherford reclaimed bronze with his last effort of 8.29m, although a fourth jump of 8.26m, originally given as a foul was restored to him after the action was done, and would have offered him a different mindset in the closing stages had he known.

There was controversy too as Lawson’s last effort appeared to have trumped even Henderson’s, and both he and his coach were outraged, as was the crowd, when the mark came up at 7.78m - but he had apparently disturbed the sand with a trailing hand.

“A gold medal is like a newborn baby - it's just lovely,” said Henderson.

“My mum can't be here, she has Alzheimer's.

“When I place that medal in her hands, I'll be crying.”

“Nobody out there was unbeatable.

"I came here to win and I'm going away disappointed.”

Fraser-Pryce has had her season undermined by a toe injury – she had only broken 11 seconds once, with 10.93, before she came here – and by the way she grimaced after her semi-final victory it seemed the injury was still bothering her.

"I am blessed to have accomplished so much.

"I think this is my greatest medal ever.

"I knew I had one more race to go and I just prayed to God."

Concluding the entertainment – the men’s 100m final, which is due to offer a re-match between Justin Gatlin and defending champion Usain Bolt.