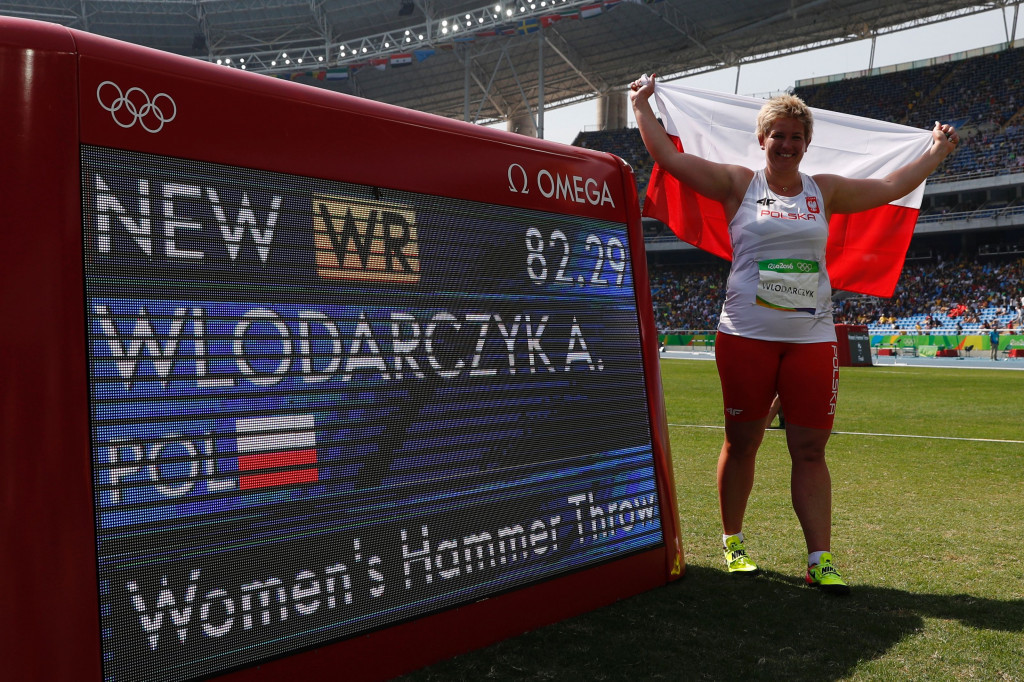 The Rio 2016 athletics programme had its third world record here this morning – a hammer throw of 82.29 metres with which Poland’s Anita Wlodarczyk earned gold – and it might have had a second had Ruth Jebet run  a second faster in winning the 3,000 metres steeplechase title in 8min 59.75sec.

Wlodarczyk had hinted heavily – could hammer throwers do otherwise? – that she wanted to improve upon her world record of 81.08m set last year, and her intentions were clear enough as she launched an Olympic record of 80.40m in the second round before trotting over to her coach in the stand for some fine tuning.

Whatever was said, it was effective, as she returned to set her new mark in the third round, adding 81.74m – the second furthest ever thrown - in the fifth round for good measure as she upgraded the silver she had taken at London 2012 into gold.

"I do believe my record will be in my hands for the next 20 years," Wlodarczyk said afterwards.

She then referred to her friend Kamila Skolimowska, the winner of the hammer Olympic gold medal for Poland at Sydney 2000 and died aged 26 in 2009 of a pulmonary embolism.

"I´'m so happy to win the gold medal 16 years after Kamila did it in Sydney,” Wlodarczyk said.

“She was my hero.

“The father of Kamila gave me her glove and I used that to take part [in Rio] and I will continue to do so."

The silver medal went to China’s Wenxiu Zhang with 76.75m and Sophie Hitchon became the first Briton to win an Olympic hammer medal for 92 years - Malcolm Nokes took bronze also at Paris 1924 - as she moved herself up from fifth to third with a last round national record throw of 74.54m, edging ahead of Germany’s former world champion Betty Heidler, who thought she had earned a medal with a fifth round of 73.71m.

"I was fourth at the World Championships last year and fourth in last month’s European Championships which was a little bit disappointing,” said Hitchon.

“To have a national record, I'm well pleased with that."

The women’s 3,000m steeplechase was effectively a re-run of the monumental contest which took place at the International Association of Athletics Federations’ Diamond League meeting at Eugene in May, when former Kenyan runner Ruth Jebet, now running for Bahrain, won in the second fastest time ever, 8:59.97, with Kenya’s world champion Hyvin Jepkemoi just behind her in 9:00.01.

This time round the result was the same, although the distance between the two women was far greater as Jebet, having surged down the final back straight, finished well clear of the Kenyan to win in an area record, who took silver in 9:07.12, narrowly ahead of US runner Emma Coburn, who claimed bronze in an area record of 9:07.63.

"This is the second time that I missed the world record,” said Jebet.

"I admit that it was too easy for me, but nobody told me about the record. I wanted the gold medal."

In total the race involved two area records, one national record and four personal bests – rarely if ever has there been a women’s 3,000m steeplechase of such depth of quality.

Christian Taylor, the world and Olympic triple jump champion, required just one qualifying effort of 17.24m, the furthest of the day, to reach a final which, sadly, will lack his arch-rival, Cuba’s Pedro Pablo Pichardo, who was unable to start despite being on the startlist.

There was another significant casualty in the men’s 400m hurdles, where Kenya’s Nicholas Bett, winner of the world title last year from the outside lane in a national record of 47.79sec.

Bett also had lane eight for his opening heat, and was going well, still holding a lead, as he approached the last hurdle, stuttered like a nervous horse, then crashed through it to earn disqualification.

Meanwhile, world 200m champion and European 100m champion Dafne Schippers, who finished fifth in the 100m final on Saturday (August 13), has revealed that she has been suffering from a leg injury.

"Last Wednesday I was ready to go home because of the injury," Schippers said after qualifying for the semi-final of the 200m.

"But I carried on.

"All I could do was to run and have treatment.

"I was very disappointed that I wasn't able to show what I'm capable of doing.

"On Friday it was a case of let's see what happens. I was watching it hour by hour. I didn't have too much coordination.

"I didn't come here to finish fifth but that was the maximum I could do."