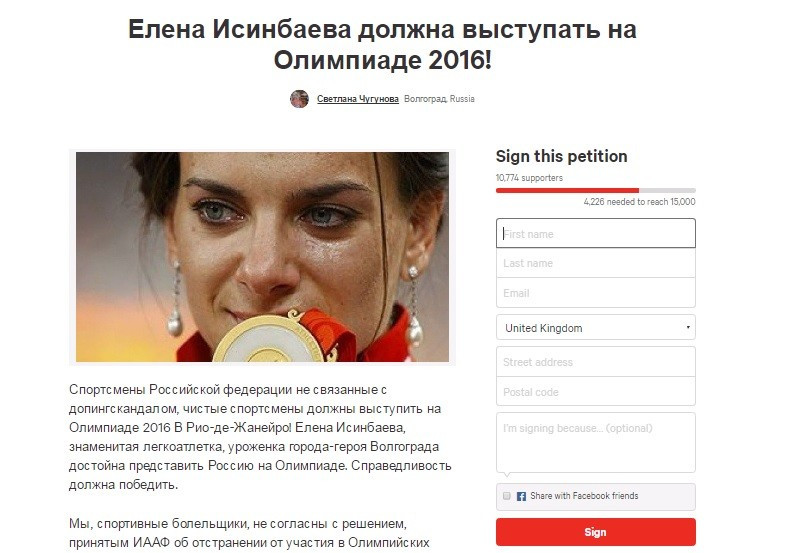 A petition calling on the International Olympic Committee (IOC) to overturn the International Association of Athletics Federations (IAAF) ban on Russian track and field athletes to allow Yelena Isinbayeva to compete at Rio 2016 has attracted more than 10,000 signatures since it was launched on Saturday (July 30).

The document has been created on the change.org website by a group in Russia, who have also petitioned for other competitors from the country not implicated by doping scandals to be granted permission to take part at the Games.

Those behind the petition, entitled "Let Her Jump", are appealing for the IAAF to reverse their decision to impose a blanket ban on all Russian track and field athletes from Rio 2016, which they “absolutely disagree” with, in order to allow the likes of pole vault world record holder Isinbayeva to participate.

They claim the IAAF’s choice to exclude the entire team “is illegal, unreasonable and creates a dangerous precedent”.

The IAAF ban was put in place in November following allegations of a state-sponsored doping scheme in the country, revealed by the World Anti-Doping Agency (WADA) Independent Commission report.

The campaign group believe the decision from the IAAF tarnishes the mantra of the founding father of the Olympic Games, Pierre de Coubertin, who said the “most important thing in the Olympic Games is not winning but taking part”.

They have urged the IOC and its President Thomas Bach to “urgently consider options for her attendance to the Olympic Games as an athlete”.

“Today, the Olympic Games will not be able to attend the athletes with an impeccable reputation,” the petition reads.

“One decision of IAAF sports functionaries has dashed our hopes, years of preparations and expectations of millions of fans from around the world.

“It is the first time in modern history of the Olympics, when Games are not the home of the strongest athletes.”

Isinbayeva, winner of gold medals at Athens 2004 and Beijing 2008 and whose world record of 5.09 metres has stood since 2009, attended the Court of Arbitration for Sport hearing last month when 68 athletes and the Russian Olympic Committee (ROC) saw their appeal against the suspension rejected.

She has been the most outspoken critic of the IAAF ruling, which allowed Russians to participate in the track and field competitions at Rio 2016 only if they could prove they were not tested in the scandal-hit nation and were therefore not part of the state-sponsored system.

Long jumper Darya Klishina is the only Russian athlete who has met the criteria set by the IAAF.

“We are led by a strong desire to support Yelena and to draw people’s attention to this precedent,” Alexsandr Bychkov, one of the members of the group who established the petition, told insidethegames.

“Along with this we fully support the struggle against using drugs in sport and suppose it unacceptable.

“As a result there is a paradoxical situation, when we - several thousand common people - are supported by people all over the world, in Kenya for example, but we are ignored in the country, where Yelena was born and for which she won two gold medals and has done so much for the society and charity.”

A similar petition was set up over the weekend in a bid to get the IOC to overturn their decision not to allow whistleblower Yuliya Stepanova to compete at the Games.

Bychkov, however, claimed this is an injustice due to the fact that Stepanova, an 800 metres runner, was banned for two years in 2013 following abnormalities in her biological passport while Isinbayeva, considered one of the greatest pole vaulters of all time, has never failed a drugs test.

The petition is available here.