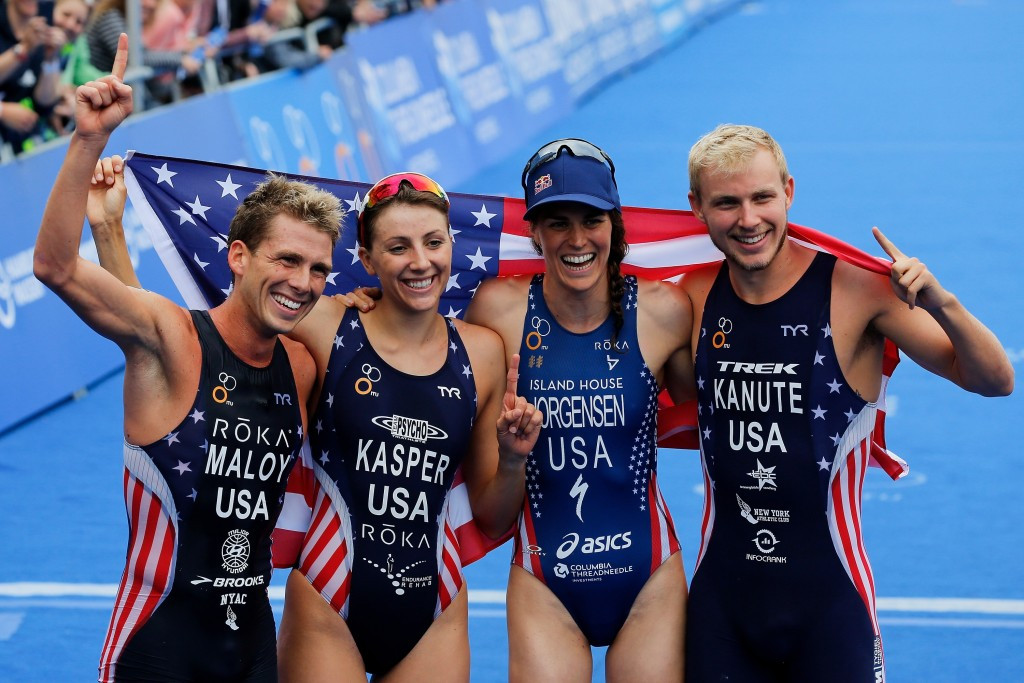 A small International Olympic Committee (IOC) delegation were in attendance to watch the eighth edition of the Championships, ahead of producing a presentation at the next IOC Executive Board meeting.

While several of the sport’s major names were absent as their attentions remained firmly focused on Rio 2016, the favourite for the women’s Olympic gold, Gwen Jorgensen, boosted the race by being included in four-member American team.

Her influence was felt immediately in the super sprint format, with the 31-year-old leading off the American team and featured in the lead group during both the swim and the bike events.

Although she settled for bronze in the World Triathlon Series yesterday, Jorgensen had produced the second fastest women’s five kilometre run time and she showed her pace again by ending 11 seconds ahead of her nearest rivals, finishing her leg in a time of 20min and one second.

It gave the American team a perfect platform to challenge for the gold medal, with Ben Kanute and Kirsten Kasper able to stretch their advantage to nearly one minute ahead of the final leg.

The anchor leg had been given to Joe Maloy and the 30-year-old started to see his advantage cut, as the six strong group containing hosts Germany, France, Russia, South Africa, Australia and Britain worked to chase him down.

The latter two nations had enjoyed strong comebacks in the race, with Australia having been as low as 15th after the first leg, while Jodie Stimpson produced a strong performance to bring Britain into the chasing pack.

Maloy had enough to comfortably hold on to the race lead, with the American team eventually claimed gold in a time of 1hr, 20min and 29sec.

"The key word is team. I crossed the line but we shook hands in between legs, and I couldn't have done it without these guys," Maloy said afterwards.

"We compete all the time individually, and it's nice to group up.

“There's a lot behind the scenes that goes on with camaraderie and this is kind of a visual example of it, which is really cool."

A three-way sprint finish was required to decide the remaining podium positions, with Australia’s Ryan Bailie, France’s Anthony Pujades and Germany’s Gregor Buchholz having pulled out from the remaining chasers.

Bailie produced the fastest kick to give Australia silver in 1:20.58, while there was home delight as Buchholz finished on the same time to win bronze for Germany.

The French team ended just one second behind, but missed out on a podium place.