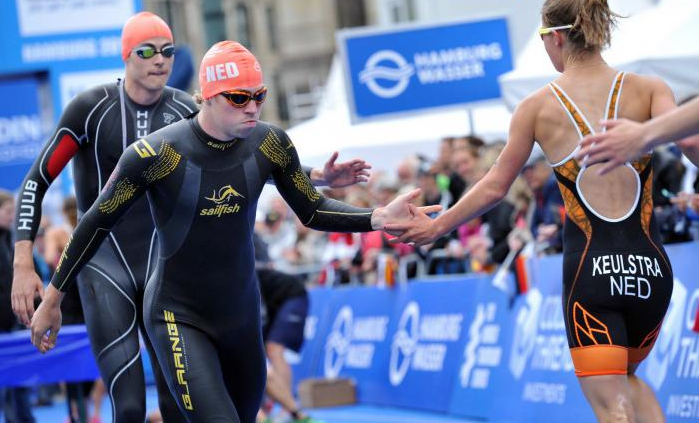 International Triathlon Union (ITU) President Marisol Casado hopes tomorrow’s Mixed Relay World Championships will show that the discipline has “all the ingredients” to be added to the Tokyo 2020 sport programme.

A small International Olympic Committee (IOC) delegation are here in Hamburg to watch the eighth edition of the Championships, which is taking place after today’s World Triathlon Series races in the city.

The delegation are set to produce a report following the event in the German city, which will then be presented at the next IOC Executive Board meeting, due to take place in Rio de Janeiro next month.

It comes after IOC sports director Kit McConnell revealed last month that a final decision would be taken for choosing events for the Tokyo 2020 Olympic programme from within existing sports in June 2017.

Talks with International Federations will also be “accelerated” following Rio 2016.

Casado is hopeful that the "spectacular" nature of the event and its appeal to television audiences will boost its claim to be included, and she also believes IOC President Thomas Bach is impressed by the concept.

“Three years ago, before he was elected, Thomas Bach was here at the mixed relay and it was really fantastic,” said Casado, who is also a member of the IOC.

“From that moment I thought he was very impressed by our proposal.

“I am quite confident that everyone understands that this is something quite good.

“It is something that athletes like and it is adding the team values to a very individual sport, which they really like it and appreciate."

Her view was echoed by Spain’s Mario Mola in the pre-race press conference, who highlighted that triathletes only have the opportunity to race in one medal event for both men and women.

The 26-year-old, who has won three World Triathlon Series events this season, is set to miss tomorrow’s race as he continues his preparations for Rio 2016 but claims the mixed team relay adds a new element to the sport.

“I think other sports have chances to get more medals.

“It would be great for athletes to have the opportunity to race for more than one medal, while people like to also watch fast racing with things happening quickly.”

It was controversially denied a place by the IOC Executive Board at a meeting in 2013, after they ruled that no further disciplines would be added for the 2016 Games, partly to prevent Brazilian organisers being placed under more financial pressure.

Following successful mixed team relay events at the Nanjing 2014 Summer Youth Olympic Games, the Commonwealth Games in Glasgow and the Asian Games in Incheon, the ITU remain hopeful of inclusion at Tokyo 2020.

They are one of several sports to have already proposed mixed team events in order to introduce new and gender-equal competitions but without the need for extra participants.

“It is very clear that it is a promotion of women because in our sport we are having good growth but not that great, we can still improve the number of women competing in triathlon,” Casado said.

“Since the beginning it was one of the factors to promote it and it was very, very important.

“This weekend we choose again Hamburg, as at the moment it is the most suitable for the spectacle of the mixed team relay and television is always very happy in transmitting the event.

“We have all the ingredients.”

Mixed doubles in table tennis and a mixed team competition in archery are among the other possibilities set to be considered by the IOC, while basketball 3x3 has also been mooted.

The IOC Executive Board has already recommended that baseball and softball, karate, skateboarding, sport climbing and surfing are added to the sports programme at Tokyo 2020.

The decision is expected to be approved by the full IOC membership at its Session in Rio de Janeiro between August 1 and 4, ahead of the Olympic Games.

With those sports introducing 18 new events and 474 new athletes to the programme in the Japanese capital, it leaves less room for more athletes from existing sports.