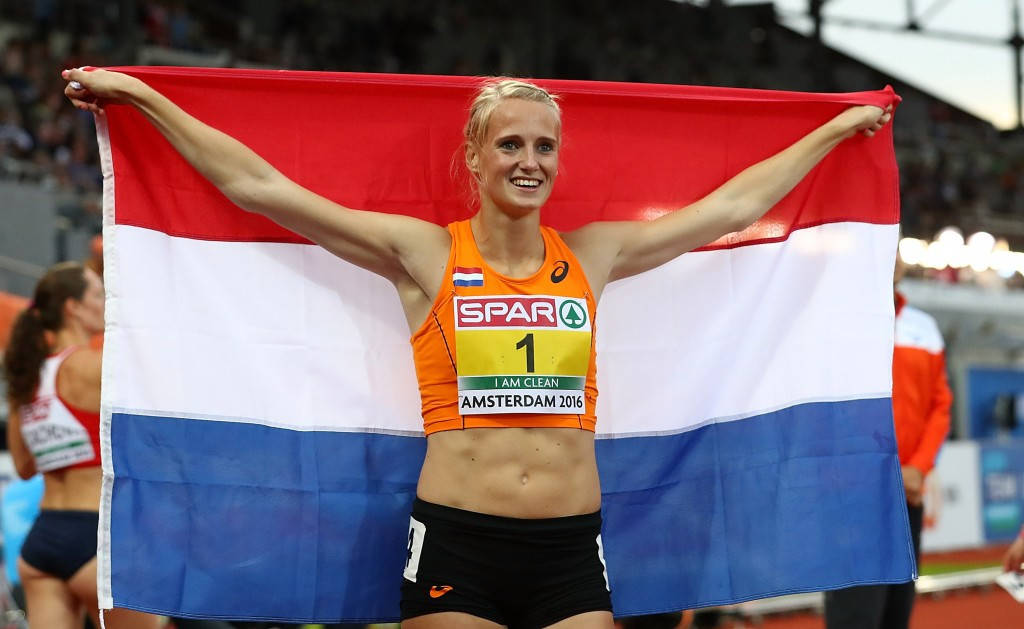 Dutch heptathlete Anouk Vetter managed to better home heroine Dafne Schippers last night as she earned a third Dutch gold at the 23rd European Athletics Championships with 6626 points, breaking the national record of the woman who has since turned to sprinting in a big way.

The 23-year-old Vetter came home a weary last in the concluding 800 metres, but her time of 2:21.50 left her 168 clear of the athlete who had been hoping to win a hat-trick of titles, Antoinette Nana Djimou.

The Frenchwoman totalled 6458 ahead of Austria’s Ivona Dadic, whose 6408 was also a national record.

Earlier in the day Vetter had set a huge personal best effort of 55.76m in the javelin that all but sealed gold with only the concluding 800m to go.

In the women’s pole vault Germany’s Lisa Ryzih, having joined Ekaterini Stefanidi as the only competitor to clear 4.70, was unable to continue, and congratulated the Greek, who was ahead on countback, with a tearful hug.

Stefanidi immediately raised the bar to a Championship record level of 4.81, clearing it on her third attempt, before having three unsuccessful attempts at 4.94, which would have been a Greek record.

The men’s 1500m produced a tumultuous spectacle in the final straight of a race so slow and tactical it went through 800m in 2:10.43.

When the distance ran out it was Norway’s Filip Ingebrigtsen who finished fastest, in 3:46.65, with silver going to Spain’s David Bustos in 3:46.90 and bronze being taken by Ingebrigtsen’s elder brother Henrik, the 2012 European champion, in 3:47.18.

The closing stages of the women’s 800m were similarly dramatic as Ukraine’s Nataliya Pryshchepa burst between France’s Renelle Lamote and Sweden's Lovisa Lindh to win in 1:59.70.

Tatsiana Khaladovich of Belarus earned unexpected gold in the women’s javelin with a second round national record of 66.34m which proved beyond a field including the current world champion, Katharina Molitor of Germany, and the Olympic champion Barbora Spotakova of the CzechRepublic.

Germany’s 19-year-old world indoor silver medallist Max Hess won the triple jump with an effort of 17.20m, the best in Europe this year, with silver going to Poland’s Karol Hoffman, with a personal best of 17.16, and Julian Read of Britain claiming bronze with 16.76.

Turkey’s recently naturalised Kenyan runner Yasemin Can added the 5000m title to the 10,000m she had won on the opening day.

But her huge lead almost disappeared on the final lap as Meref Bahta of Sweden - a naturalised Eritrean who gained Swedish citizenship in 2008 - and Britain’s Steph Twell sprinted home.

Dmitri Bascou took the men’s 110m hurdles title in 13.25 ahead of Hungary’s Balazs Baji, who set a national record of 13.28, with bronze going to Bascou’s compatriot Wilhem Belocian in 13.33.

Britain’s Andrew Pozzi, who had equalled his personal best of 13.31 in qualifying, was unable to start.

Poland’s Piotr Malachowski regained the men’s discus title he last held in 2010 with a best of 67.06m ahead of silver medallist Philip Milanov of Belgium who threw 65.71 and Estonia’s 37-year-old 2008 Olympic champion Gerd Kanter who managed 65.27.