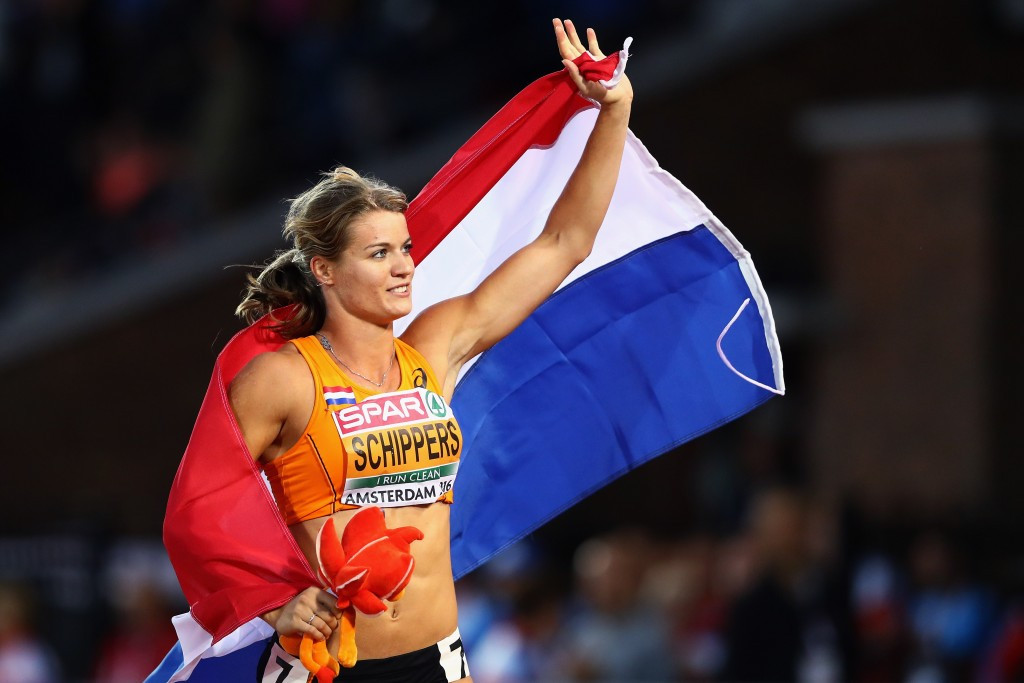 The Netherlands’ world 200 metre champion Dafne Schippers lifted the home mood at the 23rd European Championships here as she delivered a fervently anticipated victory in the women’s 100m final.

Earlier in the evening Dutch athlete Churandy Martina, winner of the previous evening’s men’s 100m title, appeared to have completed a sprint double, only to have his 200m victory annulled by disqualification for a lane infringement as he rounded the final bend.

The women’s 100m final was scheduled last on an evening that was increasingly cold and blustery, but Schippers still managed to win in 10.90sec, the 12th fastest time of the year, and not much short of her 2016 best of 10.83sec.

“It is fantastic to have this title,” said the 24-year-old former heptathlete.

“I’m happy with it and I’m on the right track for the Olympics.

"It was quite windy so it was difficult to set a good time but I am shaping up well for Rio.

"The audience’s applause gave me goosebumps.”

But before starting on her lap of honour to acknowledge that applause Schippers, with the Dutch flag draped over her shoulders, made her way back to the 70 metre point of the track where Britain’s Desiree Henry, who had qualified second fastest behind her in 11.09, was being attended by medics as she lay stricken on the track having come to a sudden, staggering halt during the race.

“I felt very sorry because she is my training mate,” said the Dutch golden girl, who works with the same coach as the 20-year-old former World Youth champion in Rana Reider.

Schippers’ margin of victory was the greatest seen in a European women’s 100m final since fellow countrywoman Fanny Blankers-Koen won at the 1950 event in Brussels, where she clocked a Championship record of 11.7 ahead of the Soviet Union’s Yevgeniya Sechenova, who finished in 12.3.

Martina’s disqualification meant the men’s 200m gold passed to Spain’s Bruno Hortelano, who clocked 20.45 ahead of Turkey’s Ramil Guliyev who managed 20.51 and Britain’s Danny Talbot, who finished in 20.56

Eight years ago at the 2008 Olympics in Beijing Martina committed a similar violation which cost him the silver medal behind Usain Bolt.

France’s footballers are on a high as they prepare for this weekend’s Euro 2016 final – but there was no Euro joy for France’s Olympic pole vault champion Renaud Lavillenie as his gamble on delaying entry to the final until 5.75 metres failed in humiliating fashion.

Having nominated the height beforehand he was committed to it, even though no other vaulter managed more than 5.60m.

And on an increasingly cold blustery night, with the wind straining the nations' flags around the rim of the stadium, the world record holder - pale and drawn – soon found himself under severe pressure as he faced up to his third and final attempt with the two leaders from the earlier part of the competition, Poland’s Robert Sobera and the Czech Republic’s Jan Kudlicka, observing with interest from the shelter by the runway.

Lavillenie brought his first approach to a halt, doubling back and composing himself by putting more resin on his hands before puffing out his cheeks and resuming his attempt.

The bar juddered, then fell, along with his ambitions, as Sobera and Kudlicka arose from their seats as respective gold and silver medallists, with Robert Renna of Slovenia emerging as bronze medallist with a clearance of 5.50m.

It ended the Frenchman's sequence of three consecutive European titles.

There were no such slips for another reigning Olympic champion, Croatia’s Sandra Perkovic, as she secured her fourth consecutive title with a best effort of 69.97m, with Germans Julia Fischer and Shanice Craft taking silver and bronze medals respectively with efforts of 65.77m and 63.89m.

Libania Grenot of Italy took the women’s 400m title in 50.73sec ahead of France’s Floria Guei, who clocked 51.21, with Anyika Onuora winning the battle of Britons for the bronze as she recorded a season’s best of 51.47 to finish ahead of 32-year-old former world and Olympic champion Christine Ohuruogu who ran 51.55.

A long jump of 6.94m earned Serbia’s Ivana Spanovic a gold medal to go with her 2014 silver, with Britain’s Jazmin Sawyers, benefiting from a plus 2.8 metres per second following wind as she reached 6.86m for silver.

Yasmani Copello Escobar became the second naturalised Turkish athlete to win gold medal here as the Cuban-born 400m hurdler finished strongly to win in 48.98 ahead of Spain’s Sergio Fernandez and Switzerland’s defending champion Kariem Hussein, who took bronze in 49.10 in a race where Britain’s Jack Green came to grief on the fourth-from-last flight of hurdles.

And soon there was a third gold for an allegiance-transferred Turk as Kenyan-born Polat Kemboi Arikan, who became a Turkish citizen in 2011, won the 10,000m in 28min 18.52sec from fellow Turk Ali Kaya. another Kenyan who took up Turkish citizenship in 2013.

It looked for much of the men’s 3,000m steeplechase as if yet another naturalised Turkish runner would complete a hat-trick on the night, but Aras Kaya was overtaken at the bell by Mahiedine Mekhissi-Benabbad of France, back after the surgery to his Achilles tendon in 2015, who clocked 8:25.63 as he reclaimed the title he had won and lost in Zurich two years earlier when he was retrospectively disqualified for removing his shirt in celebration as he approached the line.

“I think most people consider me as the real winner,” Mekhissi-Benabbad said after that Zurich race before going on to win the European 1500m title.

The tall, upright figure of Britain’s defending 400m champion Martyn Rooney emerged with a lead into the straight as the stagger unwound, and he held off all boarders for the length of it to retain his title in 45.29, with the silver medal going to the Czech Republic’s 2012 champion Pavel Maslak in 45.36 and  home athlete Liemarvin Bonefacia taking bronze in 45.51.

Earlier in the day Britain’s 35-year-old 800m runner Jenny Meadows announced her retirement from the sport, having suffered a hamstring injury in failing to reach the final here.

"It is time to pass over to the next generation," she told the BBC.

"I did think my career would either end here or in Rio in a few weeks’ time. I have done this sport for 28 years and I have given my all."