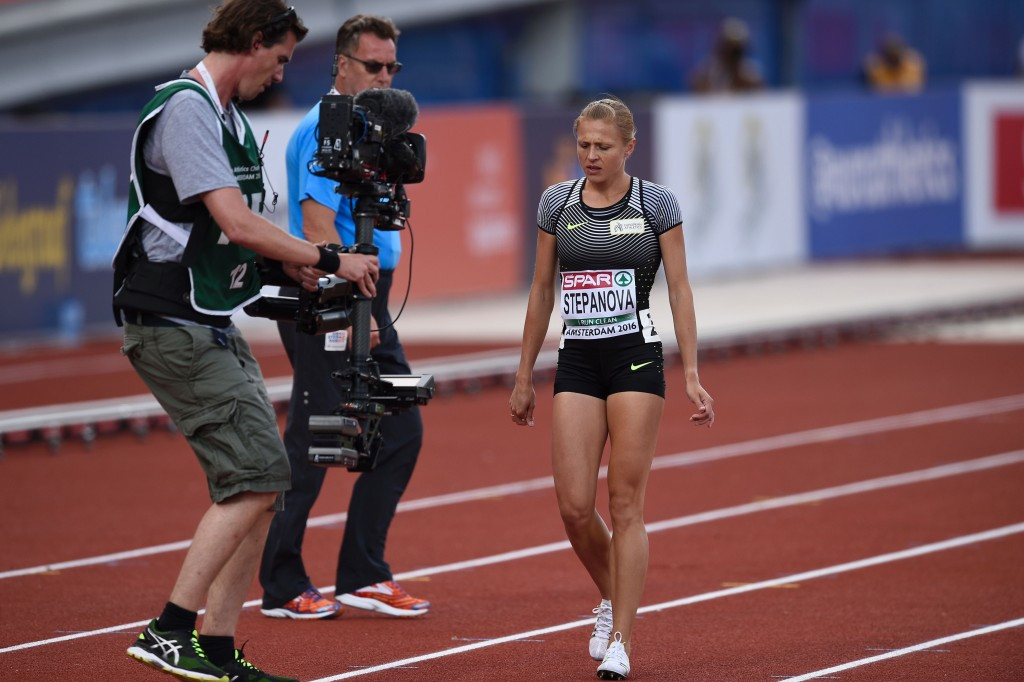 Yuliya Stepanova, already a lonely figure in athletics following her decision to whistleblow details of Russia’s doping activities, finished alone - and a distant last – here in her 800 metres heat at the European Championships.

She was left walking solemnly down the finishing straight to the line with a television camera crew backtracking in front of her after she had suddenly halted on the final bend to clutch her right foot, already 40 metres adrift of the field.

The injury was reported to be a torn ligament - “there was a snap”, she said - but she insisted afterwards that the injury was not bad enough to jeopardise her possible participation in next month’s Olympic Games in Rio de Janeiro.

For Stepanova, competing here - aptly enough - in grey kit and under a neutral flag, her first competitive race of the season proved symbolic rather than competitive on a day when Turkey's naturalised Kenyan Yasemin Can earned the first gold of these Championships in the women's 10,000m.

The neutral runner received no more than a neutral reaction as she was introduced to the crowd, which swiftly lifted its decibel level to acknowledge home athlete Sanne Verstegen, one lane outside her.

And shortly after she crossed the line, in lane eight, it was announced that she had been disqualified, presumably for an earlier lane infringement.

“I had an injury three weeks before but I kept on training and then I had an inflammation as a result of the hard training," she said.

“I am very grateful to be here.

"Thank you to the IAAF (International Association of Athletics Federations).

“I was here as a sign for clean athletes.”

Stepanova’s actions – which helped trigger the current international ban on Russia’s track and field athletes - have aroused widespread anger in her homeland, and her original plan to have her husband Vitaly and young son with her in the Netherlands was changed after reports that there might be security risks.

She thus travelled alone to compete in these Championships, although when asked if she felt safe tonight she replied: "I always feel safe in Europe."

Grave as she appeared on the track, however, the 29-year-old looked almost relieved afterwards as she began a long sequence of interviews - through a translator - with broadcast and print media.

The day before, European Athletics President Svein-Arne Hansen had described Stepanova, who returned to international competition last year after a two-year doping ban, as “a symbol to the clean athletes - with her brave statements and actions she is really going out there to protect the sport for clean athletes”.

By the time she began her slow process down the line of television crews waiting to interview her, accompanied by a translator, the desolate mood seemed to have lifted.

She smiled repeatedly during the questions and then conducted a joint interview with Jonathan Edwards for Eurosport with Britain’s Jenny Meadows, whom she bumped out of the 2011 World Championship final but who has since said she believes the Russian athlete has earned the right to compete under a neutral flag.

Meadows hugged her fellow athlete before leaving her to her huge sequence of imminent interview opportunities.

Although Stepanova, who has been training with her husband in their secret location in the United States, has not previously raced this season, she has an Olympic qualifying time from last year.

Now, however, if she is to achieve her ambition of running at Rio 2016, she must hope her injured foot responds to treatment, and that the International Olympic Committee have a change of heart over the practicality of her running under a neutral flag - something they have said would require a rule change.

A total of 88 years after the last senior international athletics final to be held in the 1928 Olympic Stadium, the 23rd European Athletics Championships produced its first winner in the form of 19-year-old Can.

Can is an allegiance transferee from Kenya who was formerly known as Vivian Jemutai, and she has lived in Turkey since March 13 of last year, and gained citizenship on May 25, being cleared by the IAAF to compete internationally from March 13 this year.

Confusingly, she has been given the same name as the Turkish-born marathon runner.

But there was no confusion about her racing on the night as she made a decisive break from the pack on the fifth lap and led by 40 metres at 3,000m in 9min 17.77sec.

Shortly after the halfway point the young runner’s lead was 70 metres, and although that margin was reduced to around 30m at the close she finished well inside her own European under-23 record of 31:30.58, set at the Turkish Championships in May, in a time of 31:12.86.

It was a testament to the quality of Can’s performance that it dragged four other members of the field, including the silver and bronze medallists, 2012 European champion Dulce Felix of Portugal and Karoline Grovdal of Norway, to personal bests.

“This was a good race, but the Olympics are going to be very hard and so I am not going to run alone there," she said.

Although there was no personal best for Britain’s defending champion, 42-year-old mother-of-two Jo Pavey, there was nevertheless a huge fillip for her as this race was the last chance to get the Olympic qualifying standard of 32:15, which she missed by less than a second earlier this season.

And Pavey, despite her obvious exhaustion, looked a satisfied athlete at the close after finishing in fifth place in 31:34.61, although she added: “I don’t know whether I have qualified for the Olympics yet because the two automatic positions have gone to other British athletes.”

The evening’s activities concluded with the presentation of gold medals to two European 20 kilometres walkers who have now been declared winners at the 2009 IAAF World Championships in Berlin following retrospective doping disqualifications for Russian athletes.