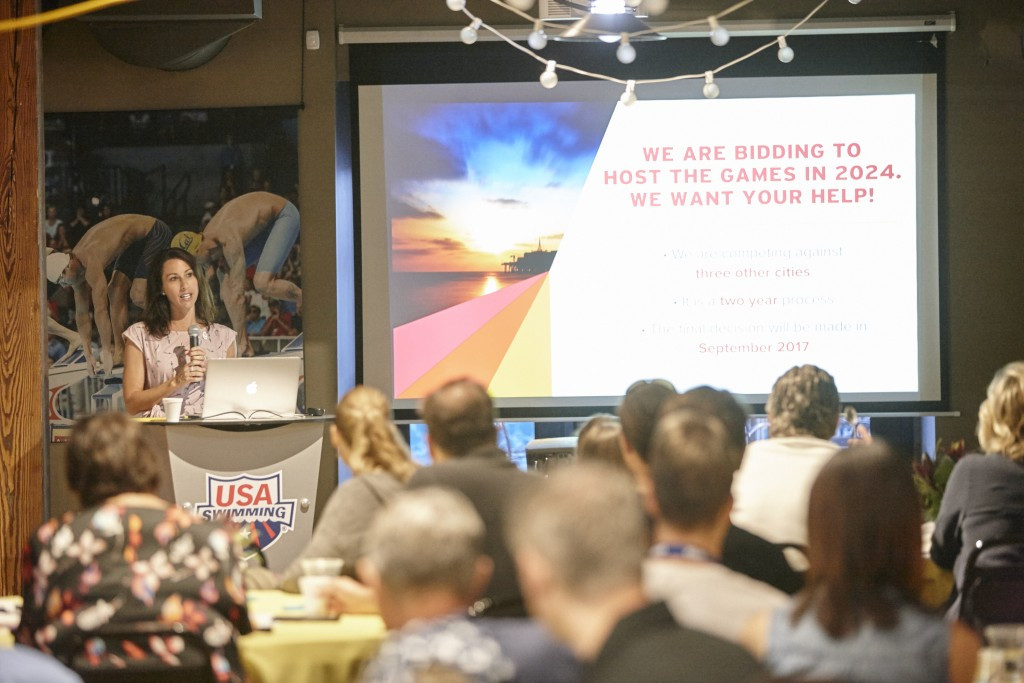 Fifty American Olympians have been given the chance to give their views on Los Angeles’ bid for the 2024 Olympic and Paralympic Games during a meeting at the USA Swimming House in Omaha.

The gathering of the Olympians, led by Los Angeles 2024 director of athlete relations Janet Evans, was held as part of the recent United States Olympic Trials.

It was the third Town Hall meeting staged by Los Angeles 2024, following previous events in Fort Lauderdale and Chicago, and was aimed at allowing athletes to provide the Bid Committee with feedback on a number of key issues, including venues and how they can further develop the Games Concept.

“On behalf of LA 2024, we would like to thank USA Swimming and all of the Olympians who took the time to learn about our Games Concept and weigh in on our plans,” Evans said.

“Athletes are at the heart of everything we do, so we were beyond excited to have this opportunity to receive feedback from athletes, who can help us design the most personalised Games experience for them.

“Equally importantly, we can’t wait to support all of the Team USA swimmers headed to Rio to realise their dreams."

A number of leading American swimmers took part in the Olympic Trials, with the highlight coming when Michael Phelps, the most decorated Olympian of all time, edged Ryan Lochte in the final of the 200 metres individual medley.

The event took place at the CenturyLink Center and Los Angeles 2024 claim it gave them “an outstanding opportunity to observe a world-class event at close quarters”.

“It was an honour to meet with so many Olympians who were eager to contribute to LA 2024’s Games Plan,” Ruggiero, an Olympic ice hockey gold medallist in 1998, said.

“Events like the Athlete Town Hall underscore LA 2024’s unwavering dedication to putting athletes at the centre of their vision.

“LA’s world-class infrastructure and passionate fans create a one-of-a-kind experience for athletes, and I have no doubt that the world’s best athletes would feel warmly welcomed in Los Angeles in 2024.”

The International Olympic Committee will elect its chosen host city at its Session in Lima in September 2017.