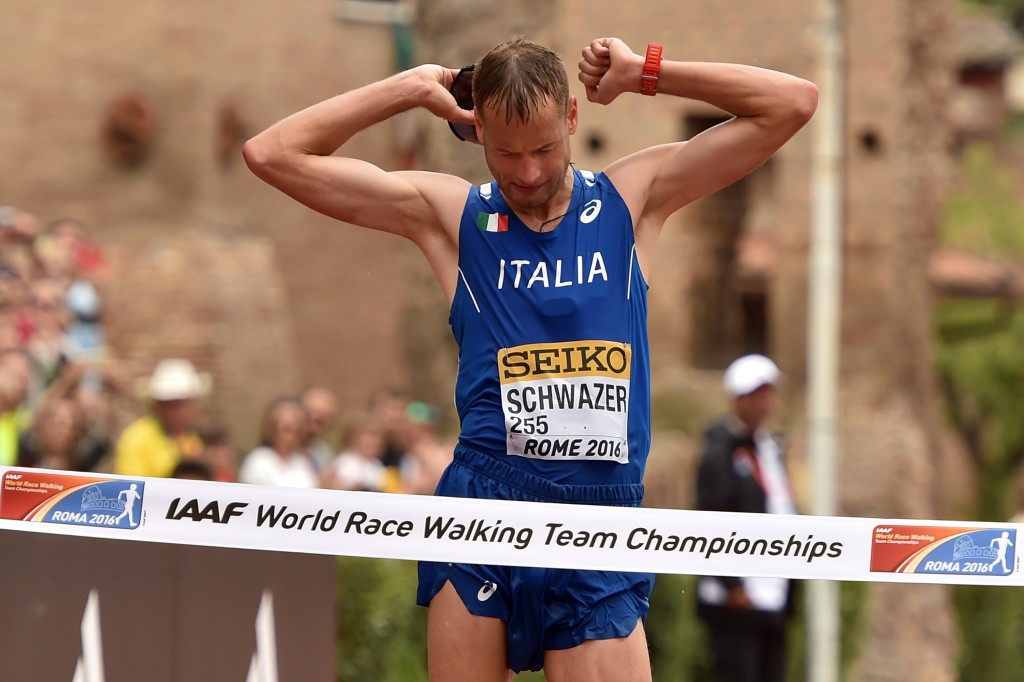 The Italian, a 50 kilometres gold medal winner at Beijing 2008 who tested positive for erythropoietin (EPO) shortly before London 2012, returned from his doping ban this year.

He claimed a shock victory at the International Association of Athletics Federations (IAAF) Race Walking Cup in Rome in May, beating Australian Jarred Tallent into second place by more than three minutes.

But Gazzetta dello Sport reported today that a May 12 retest of a January 1 doping sample showed positive traces of the anabolic steroid testosterone.

The case has been confirmed by the Italian Athletics Federation (FIDAL).

”We’re attempting to understand it.”

Schwazer broke down in tears when admitting to doping in 2012, outlining he had flown alone to Turkey to buy the banned blood booster before storing it at the home he shared with Olympic figure skating bronze medallist Carolina Kostner.

He was handed an eight-month suspended prison sentence by a court in Bolzano in December 2014, while Kostner had a 16-month suspension for being complicit in helping to cover-up his doping extended by a further five months last October by the Court of Arbitration for Sport.

Schwazer's return this year had been heavily criticised, with compatriot and world indoor high jump champion Gianmarco Tamberi saying he should not have been allowed to represent his country again, calling him “the Shame of Italy.”

Schwazer, though, claimed at a press conference in Rome tonight that he is innocent and the victim of a conspiracy.

"Someone doesn't want me to go to the Olympics, the time is short, but I'll go all the way to clear everything up," he said.

"Like four years ago I'm here in person, but there'll be no apologies today because I did not commit any mistakes.

"Back then I did, but this time no.

"I've been doing my utmost with [coach] Sandro [Donati] to show that my return is clean.

"It's a nightmare, the worst thing that could have happened to me, but I swear that we'll get to the bottom of it."

Donati is a renowned anti-doping crusader in Italy and has earned a reputation for criticising the authorities in athletics, cycling ad football for not taking the problem seriously.

"It's an incredible affair in its timing, a sample that was clean in January was re-examined, God knows why and found positive," Donati said.

"Besides, testosterone, found in minimal traces, is no use to Alex.

"That might be the doping of an idiot, that gets you nowhere".

Schwazer's lawyer Gerhard Brandstetter promised they would take whatever legal action was necessary to clear his name.

"We can't accept this, it's all unfair, Alex did nothing wrong," Brandstetter told the press conference.

Tallent, who now stands to be promoted to another victory, criticised the Italian during his medal presentation last week when he was belatedly awarded the London 2012 50km title after the doping-related disqualification of Russia's Sergey Kirdyapkin.

"Unfortunately there is an Italian who was banned just before London who has just come back from a three years and nine month ban and we have question marks over him," Tallent said.

"He was the winner in Rome and I was second behind him there, it then came out he was working with Lance Armstrong's doctor [Michele Ferrari] so there are question marks over him."

There is no suggestion yet that Schwazer will be stripped of that result, although the International Olympic Committee are currently re-analysing doping samples submitted there.