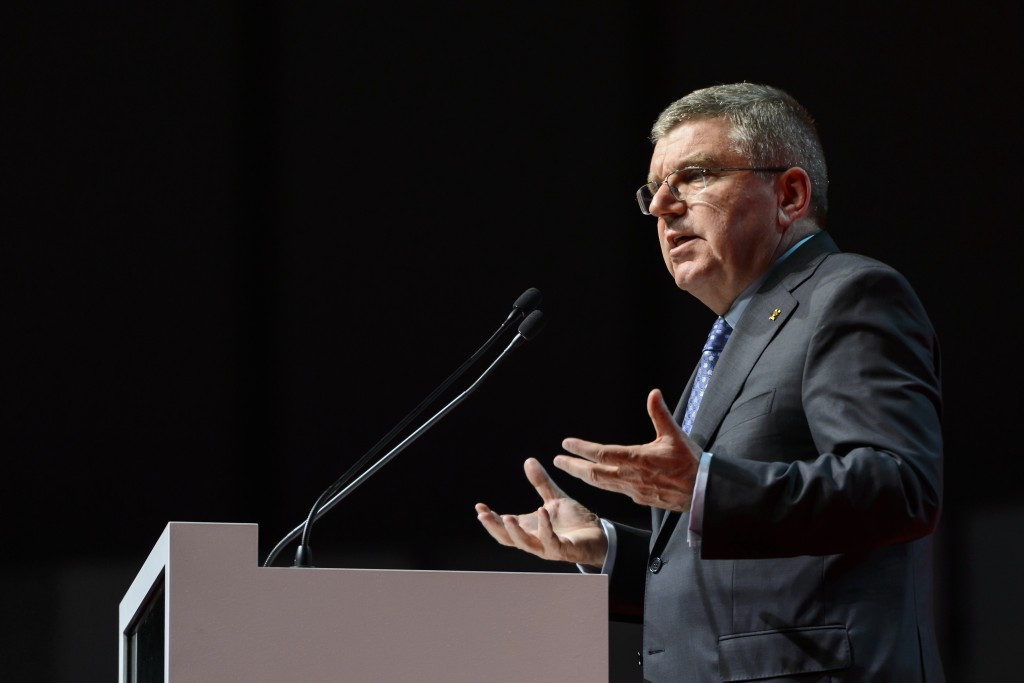 International Olympic Committee (IOC) President Thomas Bach has warned entire National Federations could be banned as sport deals with its growing doping crisis - but he stopped short of criticising Russia.

The Olympic Movement has been shaken after allegations of a Russian-run doping scheme at the 2014 Winter Olympics in Sochi emerged last week.

It followed on from the country's suspension by the International Association of Athletics Federations (IAAF) after the World Anti-Doping Agency (WADA) Independent Commission reports revealed evidence of state-supported drug use in track and field.

If the IAAF does not lift this ban - with a decision due in Vienna on June 17 - Russian athletics stars will miss the Olympic Games in Rio de Janeiro in August, but many have said that this would not go far enough and have called for a blanket ban across all sports.

Bach, who has close ties with Russian President Vladimir Putin, is keen to avoid this scenario, however, and repeatedly fended off questions about the country's potential absence at Rio 2016 during a teleconference today.

He admitted that the charges against the country were "detailed and very worrying" but insisted that at present they remain simply as allegations.

The German said the IOC would await the result of a report from WADA - who they have asked to investigate the Sochi 2014 scandal - while the IAAF have been placed in full charge of the athletics decision.

"Whatever the result is in the enquiry, we are waiting for the facts," he said on Sochi 2014.

"This is what we need, a fair procedure for everybody.

"And then there can be no doubt that the IOC will react to the result in a very clear way.

"Should the allegations be proven true, we will apply our zero tolerance policy not only with regard to the athlete but also with regard to everybody implicated within our reach.

"After the establishment of the facts we will act decisively as part of our zero tolerance policy and as part of our top priority, the protection of the clean athlete.

"If these allegations are true, we will hold everybody responsible who is implicated.

"Different kinds of action are possible.

"This could be a lifelong ban for any implicated person, not only athletes or the immediate entourage, everybody implicated.

"There could be financial sanctions for organisations involved.

"This could include the acceptance of a suspension or exclusion of entire National Federations."

When asked if entire National Olympic Committees could be banned - a reference to Russia - Bach said he "would not speculate".

"First of all it is in the hands of the International Federations to decide on the eligibility of athletes in the first hand," he said.

"With the example of IAAF, they are meeting in the middle of June."

Bach called on anyone with information to come forward "today" to help the WADA investigation into Sochi.

This was prompted when Grigory Rodchenkov, the former head of Russia's discredited doping facility in Moscow, sensationally detailed allegations of a doping scheme in The New York Times.

WADA has promised a full public report after Rodchenkov claimed at least 15 home medal winners from Sochi 2014 could have been involved.

He said that the cheating at Sochi 2014 was so effective the operation ran like a "Swiss watch" but Russian athletes and politicians have repeatedly denied his claims.

A "three-drug cocktail" of banned steroids was created, it was alleged, as well as a covert system to replace the urine of affected medal winners.

Whistleblower Vitaly Stepanov, a former employee of the Russian Anti-Doping Agency, had already claimed to American investigatory programme 60 Minutes that four gold medallists from the host nation were on steroids during the Games.

If the allegations are proven the legitimacy of Russia's home Games - where they topped the medals table - would be shattered.

"I would like to call on all those who may have any information to come forward to WADA, and to come forward today to enable WADA to come to a result which shows the full picture and which could then lead to a real judgement," said Bach.

Reports now suggest that the American Department of Justice will be launching its own criminal investigation into the Sochi 2014 claims.

They have the jurisdiction to do this if there is a link to the United States, but Bach said he had no knowledge of proceedings.

"We have no information on this, I don’t even know about what it is," he said.

In total, 454 samples were selected from the Beijing Games, with the re-tests following work with International Federations and WADA.

No names have yet been revealed, with the results of 250 retests from London 2012 due next week.

If medals need to be reallocated, this will only be done when those who stand to benefit have been re-tested as well.