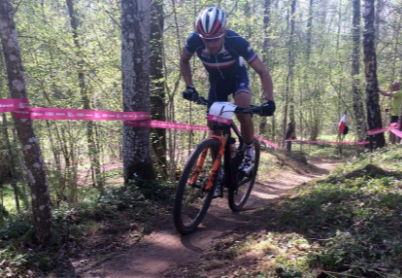 The Frenchman had won the event for the past three-years but allowed his team-mate Stephane Tempier to lead an elite 12-man group in the early stages of the 29 kilometre race.

Absalon, gold medallist at the Athens 2004 and Beijing 2008 Olympic Games, quickly took control of the race and successfully moved away from the field.

The 35-year-old, a five-time world champion, was able to continue his winning streak at the European Championships by crossing the line in a winning time of one hour, 35min and 34sec.

Switzerland’s Fabian Giger claimed the silver medal in a time of 1:37:15, while the bronze was earned by Ondřej Cink, with the Czech rider clocking 1:37:57.

European Games gold medallist Jolanda Neff attacked on the third lap of the women’s race to go solo to the finish, with the Swiss rider building a comfortable advantage.

Neff completed the course in a time of 1:34:56 to earn the European title, while Denmark’s Annika Langvad trailed her home by 3:39 to win the silver.

Germany’s Sabine Spiz completed the podium by finishing in 1:40:52.

The French team were able to celebrate a one-two in the men’s under-23 event as Victor Koretzky claimed gold in a time of 1:21:37, with Titouan Carod ending behind his teammate in 1:22:04.

Switzerland’s Marcel Guerrini was able to seal the bronze medal by clocking 1:24:13.