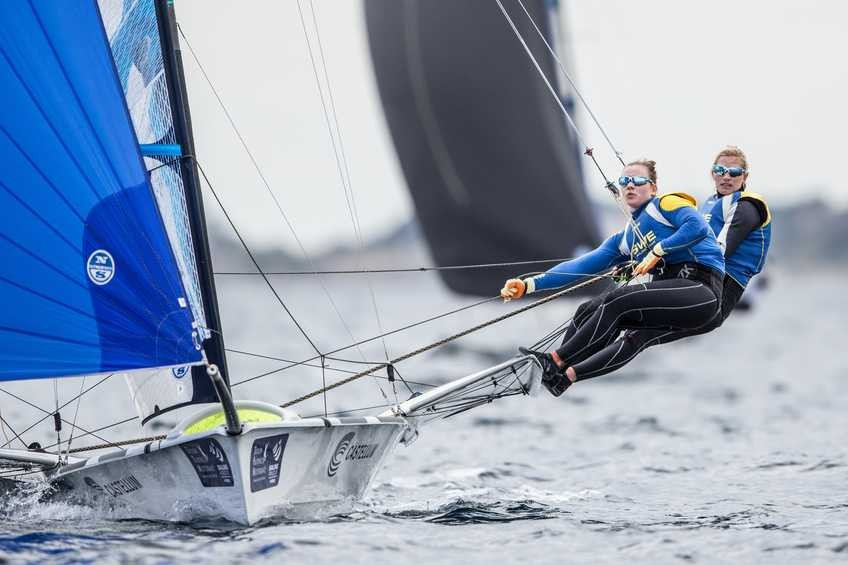 Sweden’s Lisa Ericson and Hanna Klinga picked up two wins to make a strong start to their 49erFX campaign at the Sailing World Cup in Hyères in France.

After strong winds put paid to yesterday’s 49erFX racing, Ericson and Klinga revelled in today’s lighter breeze to take two wins, a second and a 10th.

It gives them an early advantage over The Netherlands' Annemiek Bekkering and Annette Duetz, who had a second, two thirds and an eighth.

A total of 24 boats are racing in Hyères - four more than the size of the Rio 2016 fleet - including a number of sailors who will be on the Olympic start line.

"This is very good preparation for Rio - we are sailing against the best people and that's all we could ask for," said Ericson.

"The pressure is off for us; we have already qualified and we will represent Sweden in Rio.

""It's nice to have the pressure off and to train on things we want to focus on rather than looking at another boat."

The day's other race wins went to New Zealand’s Erica Dawson and Ellie Copeland and The Netherlands' Nina Keijzer and Claire Blom, who are seventh and eighth respectively.

Denmark’s Anne-Marie Rindom was head and shoulders above the laser radial fleet, posting a pair of race victories to propel her up to third overall.

The Dane struggled in the larger breeze yesterday, recording an 11th and a 22nd, but today's lighter conditions suited her better.

She won the first race of the day by a margin of 10 seconds over Sweden’s Josefin Olsson and then blew the competition away in the second, finishing more than 40 seconds ahead of overall leader Evi Van Acker of Belgium.

Van Acker held onto her overnight lead with a third and a second, while Czech Republic’s Veronika Fenclova is second overall.

Germany's Philipp Buhl remains in first place in the laser, but he is discarding a hefty 20 points.

He leads on 11 points, two ahead of Australia’s Tom Burton in second and four ahead of Great Britain’s Nick Thompson in third.

In the 2.4 Norlin OD, Australia's Matthew Bugg added a second and third to his race one win to sit on top of the leaderboard ahead of Norway's Bjornar Erikstad and Britain's Helena Lucas.

Both Erikstad and Lucas got a win a piece from the two on offer and are just ahead of a strong chasing pack consisting of Italy’s Antonio Squizzato in fourth, Germany’s Heiko Kroeger in fifth and world champion Damien Seguin of France in sixth.

Britain's Hannah Stodel, John Robertson and Steve Thomas lead the sonar fleet with a win and a discarded sixth from their races.

It comes a day after their Paralympic selection was announced by US Sailing.