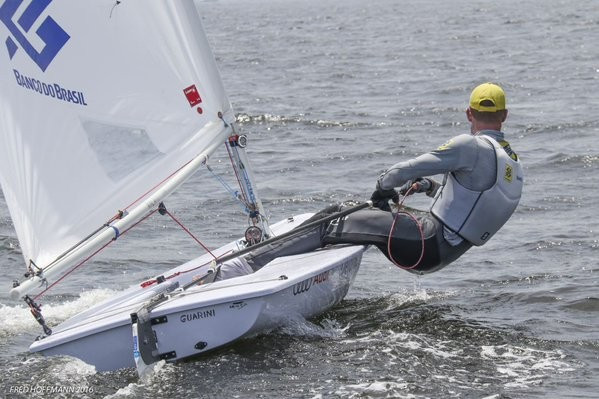 Laser legend Robert Scheidt began a year which he hopes will end with a home gold medal at Rio 2016 in perfect fashion today with victory at the Sailing World Cup in Miami.

The 42-year-old claimed gold medals in the laser class at Atlanta 1996 and Athens 2004, along with silver behind fierce British rival Ben Ainslie at Sydney 2000.

He then claimed silver and bronze medals in the star class with Bruno Prada at Beijing 2008 and London 2012 before switching back to the solo event in time to win gold at the 2013 World Championships in Al-Musannah.

He has not enjoyed complete dominance since then, but, after a steady regatta, he overhauled French rival Jean-Baptiste Bernaz in the medal race to claim gold.

"It was a tough race, the wind was light and shifty," the Brazilian said.

"I was worrying about the French guy as he was the one I had to finish ahead of to win today.

"He got to the [first] mark ahead of me, which made things very interesting.

"At the gate we had a split, which was lucky for me as I finished ahead of him."

Scheidt will be under huge pressure at his home Games on Guanabara Bay, where he is set to be among the most high-profile Brazilian stars across any sport.

Another dominant winner today was Dutch reigning champion Dorian van Rijsselberghe, who claimed victory in the R:SX windsurfer class despite only finishing seventh in the medals race.

Britain went one better than The Netherlands in the corresponding women's event, however, as Beijing 2008 bronze medallist Bryony Shaw fought back from ninth place in the medals race to finish third and thus win overall ahead Lilian de Geus.

Mandy Mulder and Coen de Koning secured more Dutch success with gold in the Nacra 17, jumping up the leader board after a tense light wind medal race.

They finished tied on 119 points with Australia's Jason Waterhouse and Lisa Darmanin winning by virtue of their better medal race performance, while Switzerland's Matias Buhler and Nathalie Brugger took bronze.

Stu McNay and David Hughes claimed a home win in the men's 470 class while Shasha Chen and Haiyan Gao of China took victory in the women's 470 event.

The women's 49erFX was the only event wrapped-up before the start of racing today as New Zealand's Alex Maloney and Molly Meech had secured victory with a day to spare.