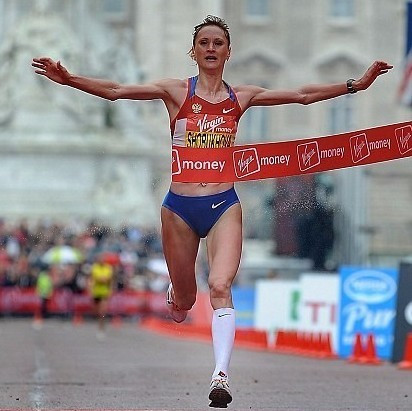 London Marathon officials are continuing to take legal proceedings against Liliya Shobukhova, winner of the race in 2010 but retrospectively disqualified for doping, to recover a share of the $1.5 million (£1 million/€1.3 million) in prize money she earned.

Along with a two-year suspension, Shobukhova was also stripped of her win at the London Marathon and victories at the Chicago Marathon in 2009, 2010 and 2011.

The London Marathon launched legal proceedings last year against Shobukhova in a court in London.

The paperwork must be served on Shobukhova in Russia before the case can continue.

"Legal cases are very difficult to determine but she won that money unfairly and we want it to be to redistributed it to the other athletes who competed fairly," said Hugh Brasher, the race director of the London Marathon.

It is unclear how much of the prize money Shobukhova has left.

In December 2014 it had been reported that she had paid $550,000 (£380,000/€500,000) to cover up positive doping results after she was blackmailed by Papa Massata Diack, the son of former International Association of Athletics Federation (IAAF) President Lamine Diack.

It has been reported that she has also used her prize money to build a hotel in her home town of Beloretsk.

The runner who stands to benefit most if the London Marathon is successful in its pursuit of Shobukhova is Aselefech Mergia, the Ethiopian promoted to first place following the disqualification of her rival.

London Marathon chief executive Nick Bitel has claimed, however, that the message they are sending is just as important as regaining the money.

"We want to make sure everyone is aware we have a zero-tolerance towards drugs," said Bitel.

"Any athlete that dishonestly earns prize money through our events we will make sure we do everything we can to regain that money."

Under a new scheme, the winners of this year’s London Marathon, Kenyans Jemima Sumgong and Eliud Kipchoge, will have to wait five years to receive their full prize money after a new payment plan was introduced to deter drugs cheats.

"If the money had been held in a [third-party] escrow account we wouldn’t have to be going after her for so much," said Brasher.

"The principle is that holding it will deter drugs cheats and it is supported by athletes.

"If it happened again, the money would be retrospectively paid to the athlete they defrauded it from."

Shobukhova had her ban extended to three years two months by the IAAF but the World Anti-Doping Agency granted her a reduction of seven months.

It followed her providing information to the Independent Commission chaired by Canadian lawyer Richard Pound which led to Russia being banned by the IAAF from international competition.

Shobukhova's evidence also led to three leading officials, including Papa Massata Diack, being banned from the sport for life by the IAAF Ethics Commission.